The fact that I'm posting so many posts in so few days means, for one, that at least my creative abilities have not totally depreciated. Haha. It could have also meant that I was freer, since my last two major essays were handed up last Friday, but that's not true as I've got a test later on at about 6 pm and I've also got a short report to write up for me language module.

Anyway, we had fellowship training today. It wasn't really quite 'training', since it was basically a panel on singlehood presented by P and J and hosted by Y, and it was more entertaining than informative, since as Y put it, "You all know most of this stuff already anyway."

After the event, we all were just mingling about, and then W came up to me and we started talking, and he mentioned that we didn't have to be part of the SDU anymore, we could be SUD (Single Unwanted Dudes). I upped him one by suggesting we could be SLUGs (Single, Lonely, Unwanted Guys, small 's' since plural). K wanted to go the extra bit and replace 'Guys' with something that started with 'T' instead, but we immediately vetoed him on the spot.

Oh, and the senior students like prepared lots of little cards with a little varnished M&M on it as like their going away gift, since this was their final FT. This is what it looked like: 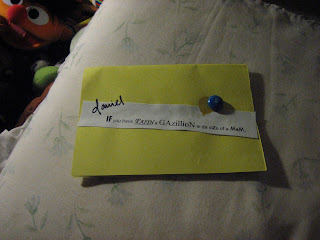 I was really touched lah, since it obviously took quite a bit of time to prepare it, and it should be made known that senior year isn't exactly the senang-est time in uni life. And many of the seniors wrote a little note inside, though not all of them were represented. (Like MS didn't write inside, but I think it's cos she was preparing for the FT itself, and not because I tricked her into eating chocolate without nuts, biscuits or rum last week.) 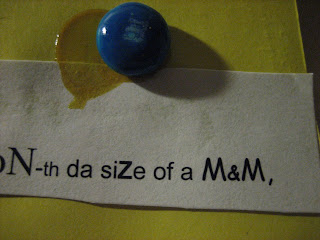 Regardless of whatever it should be, whether 'a M&M' of 'an M&M', or even if they made a mistake and called it a Smartie, I really do feel blessed by knowing the year 4s who continued to work hard in both their academic life as well as in campus ministry, and for providing guidance, leadership, and friendship. God bless guys.

Oh and before I forget, thanks D for trying to help make me feel better on Monday night.

And while we are on the subject of fellowship, this here is the picture of the Guyros guys who went to catch 300 a while ago. Yeah. All of us, except the blurry guy at the left side of the photo. He's an unknown passerby. 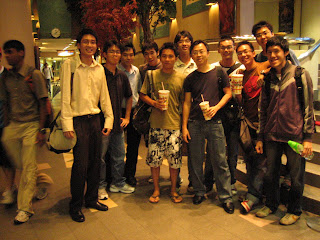 yeah. supposed to be there earlier to help write, but i was preparing for my presentation, and then, the financial situation update.

so reached there late after dinner haha, and then got to run here run there. glad u understand though!!

i really wanna write for all whom i know, and to help out in the preparation of these cards during mon evening, but time was taken up by the preparation for presentation =( u should give credit to rachel, sida, clem black, evan, ruth, chris for doing the cards =)

haha u can pass me the card so i can write stuff on it! (i only managed to write for 2 ppl...)

and it should be an M&M.

and oh, evan came up with this idea too.

it's fellowship TEACHING not training...