This post is for one of my friends who is a little burned out as a relief teacher.

She said she was feeling tired cos of a bad day (I'm guessing it was more than just one day) at school, and the kids were bothersome, and they always went to her to solve all their problems, and she had a long day, and had to give tuition after school, and to top it off, she was sick. Which can be rather disconcerting, I think. Plus there's lots of other things going on in her life which I shall not elaborate on, since that's her story, not mine to tell. And I wouldn't know much anyway.

So I decided to be nice and dedicate a small part of my post to her. Because she regularly stops by at my blog to take a look. Even though she really irritates the crap out of me at times. それで、彼女は「ピーマン」と同じだ。Haha... Still remember when A told me what it meant. Totally hilarious.

So here's a picture for you, to help you remember when you had fun with kids: 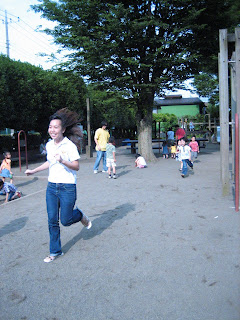 子供が大好き．．．でしょう？
Work has been ok, even though the F1 weekend was kinda crazy. Everyday start work later, but can end at like 12 plus, mainly cos we were just waiting for the stories to go through. And I wasn't even writing the stories. The 拘禁組 was helping one of the senior reporters to collect quotes from random fans around the circuit area.

Oh and on Friday, I realized that too much loud sounds can actually make you feel sick. I mean, at first, I was mildly irritated by the sound of the F1 cars zooming past, but after about 10 minutes, I actually felt a bit nauseous.

Still, overall, it was pretty exciting. And we were working from the Swissotel, since they nicely offered the media the use of the an executive meeting room to be like a mini-media-center. And on top of that, they provided food and drinks. Talk about hospitality.

Cheerio
Posted by ArkAngel at 10:10 AM