Journey to the West

So I went to Osaka for a short personal holiday, just to get to see the Kansai area, but really, it was because I wanted to take the Shinkansen. Naturally enough, I was excited about leaving Tokyo to go out to another city, much like when I took the day trip south to Yokohama.

However, I started off a bit late. I had really intended to go to Tokorozawa HC in the morning, and then leave as soon as service was over to quickly get back home, pack (yes, I hadn’t packed yet), and then get out to the trains as fast as I could. After all, Tokyo station isn’t exactly near to my place, and I was pretty sure it would be crowded, and I wanted to try to get a seat on the side facing Mt. Fuji, and I was thinking that I should try and squeeze as much time at Osaka as possible.

Thing is, on Sunday, we found out that Tomoho-chan was leaving Tokyo to go back to stay with her family in Aomori. And so I felt it wouldn’t be good to quickly run off, especially since this was one of the few times she could stay around for lunch. So a few of us went to eat nearby. Of course, this meant I reached home at around 2.

It was 2.30-ish by the time I left my home, and I got to Tokyo station at about 3.30. Unfortunately, being the dope that I was, I wasn’t sure how to do the Shinkansen tickets at the turnstiles. Especially since they gave me a total of four tickets to use. So I got in, and since I didn’t want to rush for a crowded train leaving at 4, I went to the adjacent track to wait for the 4.17 train.

Making a quick assessment of the seating arrangement, I managed to get a neat window seat on the correct side of the train. That is until I realized I was sitting in the smoking section.

So of course, by the time I transferred to another car, all the window seats on the Mt. Fuji side were taken up. Fortunately, I still managed to get a window seat on the other side. I must have looked like an idiot tourist, taking photos all the time and stuff, but well whatever. 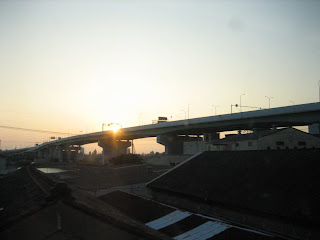 Because I was playing the tourist, I can get to take this sort of nice shots from the Shinkansen.
It was 7 by the time I reached Shin-Osaka station. And after bumbling my way around, I finally managed to reach Ishibashi station, which is where I met Philip, and later on, Ryan. Both these guys are working with Campus Crusades, and I got to know them through Yoshitaka, and I would be staying with them because they were willing to open up their spare room for poor missionaries like me who came by to visit. 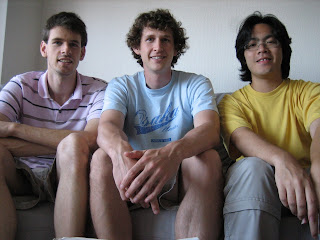 Ryan, Philip and me. They are two cool guys who are Campus Crusades staff in Osaka. They've been here for several years already.
I went out soon after to meet my friend Joanne at Umeda station. I knew her from my LAJ classes in NUS, and she’s here in Osaka teaching English as part of the JET program. And she was kind enough to show me around on Sunday night. Not just around Umeda station, where she introduced me to this thing called negiyaki (pancake with lotsa spring onions, tastes like chai tau kway), but also to Namba town, which is kinda considered the heart of Osaka city. 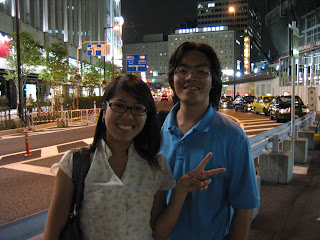 Joanne from NUS/LAJ/JET. This was after two failed self-photos I tried to do. She realized it would be better to get a passerby to help us instead.
Next day I woke up late, and after eating lunch with Philip and Ryan, I decided to go to three places that sounded interesting: the Aquarium, Osaka castle, and the Umeda Sky Garden. I got to the Kaiyukan easy enough, but didn’t really feel like paying ¥2000 to get in, so I ended up taking photos around the place.

There’s this ship there that’s also supposed to be like one of the icons of Osaka called the Santa Maria, but it didn’t unfurl it’s main sail bother it all, so I couldn’t get a very nice shot of it. 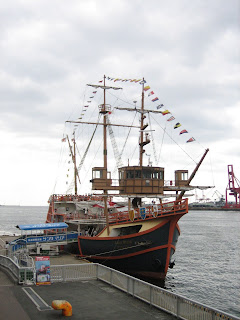 The little ship that didn't... unfurl it's sail to let me take a nice picture of it.
It was kinda a gray day at that point of time too, which is why I really didn’t feel like staying around there too long, or taking the ferris wheel. So I left and went over to the castle. 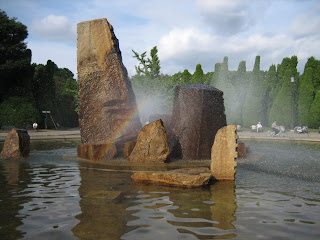 Got this picture in the park around the castle. I's a good photographer.
The original castle was built by Hideyoshi (one of the 3 unifiers of Japan), but it was pretty much razed cos his son started to rebuild the defenses, something the Tokugawa Ieyasu had forbid him to do after the Tokougawa shogunate was in power. This castle was rebuilt relatively recently, and Wikitravel describes it as a museum that was built like a castle, but whatever. It’s still really awesome. Also because when I was there, the sun came out. And we all know that having good sunlight helps make good photos, and helps make you feel happier (generally. Let’s not talk about army route marches and SOC). And I’m kinda thinking, if a Disney movie was set in Japan, you could almost imagine a scene where the castle rises out of the forest and stuff. 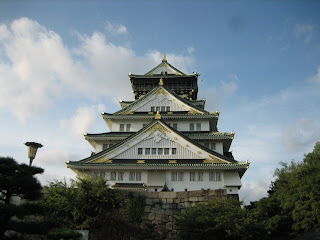 It radiates awesomeness!
And since I had decided not to splurge the ¥2000 on the aquarium, I thought I would go in to the castle to see the museum and stuff. Unfortunately, I decided to go in at 5 in the afternoon, which if you’re guessing, is the time they close. Bother.

Got to meet Joanne again for dinner at a curry place she said she preferred cos it actually was somewhat spicy. Then I went to the Umeda Sky Garden. 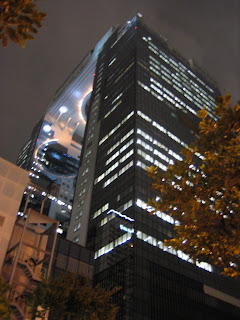 Was up there at the top
I wanted to go there because I read online that the place offers a really good view of Osaka city. It should; after all, it is 173 meters up in the air. But as I was taking the lift up, and the lift shot out from inside the building to a transparent tube, and the ground started falling away at a rather fast pace, I suddenly remembered that I am absolutely terrified of heights. Of course, since I was with another couple and a family of four in that lift, I tried to act all nonchalant and stuff, but if you had looked, you would have noticed I was gripping the handrails much tighter. It didn’t help that my brain was telling me I was suspended over several hundred feet of air only by a lift cable.

But I got to the top safely, and managed to get some really stupendous shots of the city skyline. (Once there is a proper floor under me, I feel better). Here are some of them. Didn’t stay too long, and I didn’t buy any souvenirs from there, since they were all kinda tacky. But having my pictures was enough. Osaka at night!
So anyway, as I was preparing to leave this morning, I realized I had this “I-don’t-want-to-leave” sort of feeling. The kind of feeling I had as a kid when my family would go on holiday and we had to leave to go back.

And I guess part of it was that I was begging to settle into the place. And I got to make two great new friends, and got to know an old friend better. I had reached a point where I was starting to get comfortable with being in Osaka, but hadn’t yet fully explored everywhere. And also cos I know I probably would not be heading back to Osaka anytime soon (OMF is based mostly in Kanto-Tohoku-Hokkaido, and I can’t really take or afford that many holidays).

But in the end, I have to go, since my job is in Tokyo.

And I can take solace in the fact that in the modern age of technology, there is facebook for communication, and also, that I have found out how much better takoyaki tastes in Osaka. 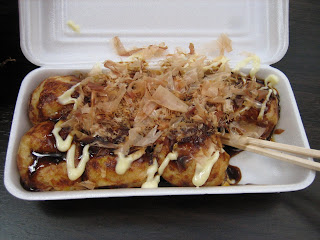 I actually wanted to tabao another packet for the train, but that would have just been greedy.
Cheerio!
Posted by ArkAngel at 10:05 PM