So right now, Tokorozawa is starting to feel the effects of a typhoon that's bearing down on Honshu, I think. Nothing too drastic yet, just the advance rains I guess. The train companies have started to take notice and to issue notice as well. 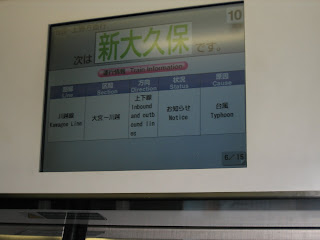 If you look close enough, you'll notice it says 'Typhoon' in the right most column. And it wasn't just the Kawagoe Line which was issuing the notice. The Saikyo Line, the Yokosuka Line, the Utsunomiya Line, and a whole bunch of other lines were also sending out notices.
In fact, I just heard a police car going by, I'm guessing they're saying something like "please stay indoors" or something like that. Quite rare for people to go around making announcements at 3 AM in the morning.

Anyway, E-mums, which was supposed to be on later on, has been canceled. And according to the Japan Meteorological Agency, Saitama's gonna get hit by storms, causing heavy rain and potential flooding. Still not as bad as Kanagawa Prefecture though. They're getting hit harder. And I'm not even looking at the Chūbu region. Read somewhere on the news that even the Toyota factory in Nagoya will remain closed today on orders of their top brass.

Anyway, some updates before I start losing consciousness. It has been getting colder (even without the typhoon), and it is more or less autumn already. According to good friend Shion, you know it's Autumn when you have to wear your tie to work. Ties are not necessary in summer due to the heat. Kinda hard to imagine that summer's over already.

Outreach at Waseda has technically started, but so far, we've been rained out both weeks. It's just how it works: if it's raining, it's a bit hard for us in the Waseda outreach group to strike up conversations with people in the open.

Kodaira-san, who is one of the most tireless workers in the KHCN, has fallen sick recently. The dude really does a lot of work, doing ministry in 4 prefectures (ok, really 3 prefectures [Kanagawa, Saitama, Ibaraki] and a special administrative region [Tokyo]), and is also one of the main leaders in the KHCN. Do pray that he will get better soon.

And a couple of weeks ago, we were having Bible study at Hanakoganei with Rekiji and Ken. One of the passages we used was on the Prodigal Son, and since I had just done that the Saturday before for the Shinjuku HC, I felt fortunate. So we were in the midst of a serious discussion, which went something like this:

Steve: Do you see how much the father loved the son in the story? He was standing there waiting, looking out for the son.
Me: I think what was important too was that the son realized the error of his ways and went back.
S: Yes that is important too. While the father was waiting out there, he didn't go to find the son. The son had to realize his wrong and decide to go back.
Me: I agree.
Rekiji: It is a very nice picture of what God is like isn't it?
S: Yes that's how it is with God.
R: (Musing out loud) Still, I wonder what would have happened if the son came running back to the father, and the father was so glad to see the son and ran to meet him, and then the son says to him: "Dad, I need more money".

I don't know why but that sounded so funny that we laughed our heads off.

Ah well that's about it. I'm having fun using skype with friends (free comp-to-comp calls!), but I really should be sleeping. More updates soon!

Cheerio!
Posted by ArkAngel at 1:23 AM

potter's clay said...
This comment has been removed by the author.
5:17 PM

hi daniel! :) just wanted to drop by and say hi and we miss you! keeping you in prayer!
- grace