Just last week I got a new housemate. His name is Tim, and he's on a short-term trip here to Japan. And he's from a friend's church in Singapore (actually, I know three friends from that church but ok).

So anyway it's been pretty good so far. He's kinda quiet, I'm kinda quiet, so we're pretty chill most of the time. But I guess so far he's had a rather decent time. He's helped out in the Kids' Club, he's gone to help Steve do Bible Study, and he's also attended the housechurches. Here's the evidence: 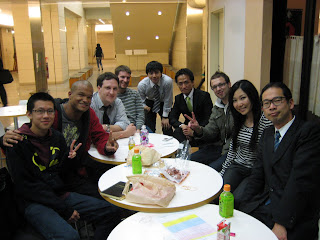 Tim is the one on the extreme left side, next to JP.
Incidentally, that day during Shinagawa Kai, there were a grand total of 7 nationalities in that group (8 if you consider me to be American). You can see it in the picture above. I'll describe it from left to right.

So Tim is from Singapore, JP is from Brazil. Simon is from New Zealand, Sam is Swiss. Shion, and the guy next to him, Jun, are Japanese, as is Koji, who's on the extreme right. Yannick is German, and Kaede is from Hong Kong. Plus American photographer = 8. 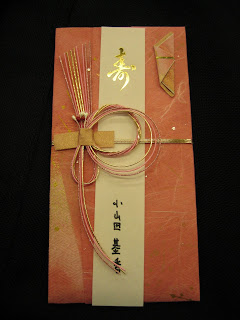 Japanese red packets sometimes make the ones I get for CNY look a little shabby. Not that I'm complaining though.
What we have here is a relatively standard Japanese red packet (Shugibukuro 「祝儀袋」), meant specifically for weddings. You know it's for wedding cos it's got pink and red and gold stuff all over. Very pretty. And it's for one of my friends, Motoka, who's dad met my dad when they were both in Wisconsin, and have been friends since then. She's getting married some time later this month, so I bought this on behalf of my family to give to her.

Good thing they had spare slips inside for me to write another one. haha.