So the Holy Weekend went by just like any other normal weekend, since here in Japan, we don't get a holiday on Friday like those of you in Singapore... so I just had to read the Bible passage myself on Good Friday, and console myself with going to see sakura. At any rate, I shall recount my weekend over the next few paragraphs.

On Friday, as I mentioned, we had nothing much except for the hanami near Yasukuni Shrine that Koji had organized. It wasn't at the shrine per se, but there was a matsuri-style pasar malam there, and one of Koji's friends had set up a stall there, so we went there to eat some food first, then walked over to where the night hanami was, at the Kita-no-Maru park. 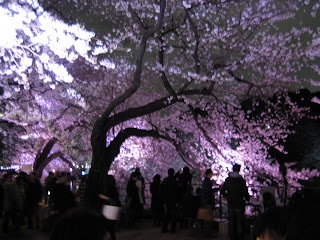 My first hanami ever in Japan
It really was quite pretty, since most of the trees were in full bloom, and they had set up lights to highlight the trees at night, which is why one was able to get shots like the above. Unfortunately, since I was also trying to co-ordinate with a friend of mine, that was the only shot I got of the Kita-no-Maru walkway area place that I got. Still, it was pretty good, and my friend, Yuki did turn up later. He had just started work the day before, and he rushed over as soon as he was allowed to leave. 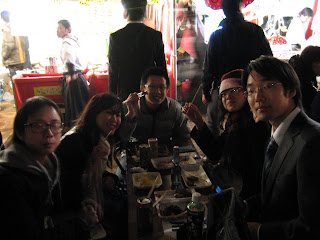 It really was the Shinjuku HC that remained for dinner. (L-R): Liu Wen, Esther, Tim, Karen, Yuki
We went to eat after that, since those of us in the picture hadn't really eaten dinner and all, and we left at around 11 and reached home exceedingly late, but it was still cool, since Yuki was able to join us.

Saturday was kinda busy because we had quite a lot of things going on. It didn't help, of course, that since we had been out late the night before and all that, we woke up at 11. Anyway, we went to Rekiji's place for Bible study, and then after that we started to watch the SuperBowl, which Rekiji had taped, with another of Steve's friends, Kaz. I wanted to watch the whole thing, but even before the first quarter had ended, Tim and I had to leave for Shinjuku HC. The game reminded me of Madden '09 at Farand's place.

Shinjuku HC was er, kinda odd, since Karen had wanted us all to watch the Passion of the Christ, but unfortunately, 1) the DVD code for the DVD was different from her computer, and 2) the DVD must have really liked the computer despite the different codes, as it refused to come out. I had to leave for Watanabe's baptism, so I'm not sure what really happened, but last I heard, the DVD was still stuck inside Karen's Mac.

Now for those of you who don't know, Watanabe, or Wattsu, as he is called, is one of the regular guys at the Shinagawa HC. He's Catholic and so a few of us (Koji, Koji's fiancee Misaki, Shion and I) went to St. Ignatius Church to see his baptism. It was the first time most of us had attended a Catholic Mass, and I must admit that it was pretty impressive. They had a pipe organ, and a choir, and all the people knew what they were to sing, a bit like a Gregorian chant I guess.

As impressive as it looked and sounded, I must say that the one thing that really made me feel God's presence was from a deaf person that was seated in the section to my left. In the sanctuary, the left-most section had a person up front doing sign language for the people, and when we were singing the hymns/chants, there was this lady in the front row who was also worshiping using sign language. And I don't know why, but I thought that was way more thought-provoking than all the grandeur of the Catholic church.

The baptism was a bit different than what I was used to, since they do sprinkling, and not dunking. It didn't help that we weren't even able to spot Watanabe because he was being blocked by the other baptismal candidates. So, well, no pictures. But it was great that we could go there and join Wattsu in his baptism. Incidentally, he chose the baptismal name of John, and we were joking that with a name like John Watts, he could pass off as an Englishman.

After that, we went to a nearby Thai restaurant, which was cool because, 1) they had Chayen. 2) they had basil leaf minced meat and rice, and 3) they had Mango Sticky Rice. We didn't order number 3 (it cost ¥1200!) but the fact that they had it was pretty cool.

Sunday morning we had Tokorozawa HC as usual, but Miyako and Kenji had invited us to go to Koganei Park for hanami in the afternoon. It really was quite a beautiful place, just a pity that it was cloudy and so the pictures weren't that great... 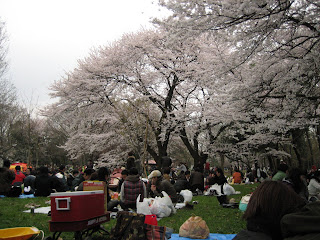 Hanami at Hanakoganei!
Still, it was a really pleasant time. The weather was cool, there was lots of good food and drinks, and really good company, as besides Kenji and Miyako and the kids, there were Steve and Kathi and the Matsumoto family. Steve organized a short egg hunt for the Komai kids, and then told the Easter story using the eggs. 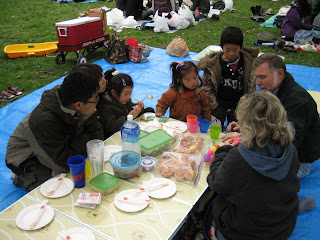 It really was stuff that was in the eggs, kinda like what my dad used to do for us as kids with Advent at Christmas time.
So each of the eggs had an item that represented one part of the Easter story, like a nail, a cross, a rock etc. The last one of course, was an empty egg, since Jesus did not remain dead in His tomb, but was raised back to life.

And sometimes, I know so much and have heard so much about the Easter story, but feel no emotional connection... like all head knowledge and stuff but not feeling it in my heart. But in the end, it doesn't really matter what I feel, as long as I believe in the Resurrection, and trust Jesus.

Hope everyone had a blessed Easter!
Posted by ArkAngel at 9:22 PM