In case some of you don't know, I have been back in Singapore for close to a month now. And Singapore is as hot as I remember it to be (though according to my dad and other reliable sources, it's even warmer and more humid than normal). And the weather, unlike in Japan, is apt to change several times over the course of a day. But it still is good to be home and to do the things that I did in Singapore before I left for Japan. 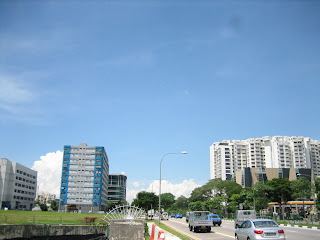 As hot and sunny as I can remember. Still better than ice and snow though.
My friend Chuya was visiting Singapore from Osaka during the first week of May. Chuya used to be at the Kotesashi campus of Waseda University, and was in charge of the E-Crew (English Conversation Club) when we visited in 2008. Now he works for a railway company in Osaka. So a few of us met up with him and brought him around one Saturday...and then his kidneys started to act up and we had to bring him to Tan Tock Seng Hospital.

Fortunately, he recovered pretty quickly from that, and since he is from Kansai*, he laughed the whole incident off as a wonderful experience in Singapore that most of his friends could never boast of having. During the stay in the hospital, he did ask me what I, as a Christian missionary, would say to people in a hospital if I was in Japan. So I mentioned to him that I would talk about how God knows everything that the future is in his hands, so I do not need to worry and could just be at peace. And I wasn't the only one to talk with him about Christianity. Leah (from the 2008 team) also talked with him about the Bible and God, so hopefully, this will lead to him getting to know God better. 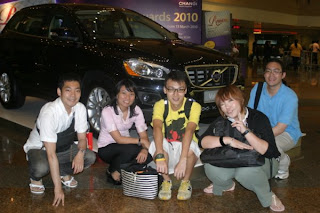 Chuya (far left) and some of us before he left for Japan
I also started attending a 2-week course at Trinity Theological College last week. I must admit, I was really rather apprehensive about attending the course at first (it's my whole aversion to commitment thing, plus it was stay-in, bringing back memories of BMT), but after the first week, I'm really glad I had gone for it. Not only are the other students really friendly and nice people (which means I also got to meet new friends), but I have been able to learn quite a lot from the classes, like the morning worships (both worship and analysis rolled into one) and the interpretation of Bible texts (very useful, and it appears to me I have been reading quite a few passages out of context).

So now I'm glad to be back at TTC, having just returned from supper with some of the classmates, and I really ought to be going off to sleep soon, but I shall chill out a bit more in my room first.

P.S. Gah it appears my tagbox has been deleted nefariously by the flooble admin.. bother it all.


*In Japan, the stereotype of the Kansai person is that he (or she) is generally more laid back and has a better sense of humour than someone from the Kanto region. Or anywhere else in Japan really.
Posted by ArkAngel at 9:44 PM