When I was about 8 years old or so, my parents bought me a bicycle. They also got one for my younger brother, and I remembered mine had yellow wheels, or at least, that yellow was a fairly prominent colour on that bike. My brother's was blue. Blue had been his favourite colour for as far as I could remember.

Anyway, every other weekend or so, my parents would bring both of us down (our sister wasn't born yet), and we would go whizzing around the void deck of our old home in Bukit Batok. And I had no trouble riding it then, mostly because there were two training wheels which pretty much prevented me from ever toppling over.

But then, we started growing up. And then we moved, and didn't take the bikes with us. Or the bikes kinda rusted away and we moved. Either way, we ended up with no bikes, which was not much of an issue, since we drove most of the time, and in Singapore, the moment you bike (or even walk, for that matter), you start sweating.

Every now and then though, my parents would take us to East Coast Park or Pasir Ris Park and we would go cycling. But I was never good on bikes-without-training-wheels, I just could not get my balance right, and would start toppling off when I tried to push off. The few times I gained enough momentum, I could cycle fairly straight; the problem was getting the momentum.

And then, once during a church outing to East Coast Park to cycle, I was kind of peer-pressured into cycling. So while my friends were all able to quickly go off cycling, I was kinda stuck trying to start off. And then, finally, I got on, but didn't have enough momentum. And there I was, trying desperately to balance on my bike but not doing a good enough job. And I was not in control of my bike as it headed towards a pond.

Fortunately, I was able to pull the brakes in time to avoid going head-over-handles into the pond. Unfortunately, I was in such an awkward position on my bike that when it toppled over, I landed on the pavement and scratched myself up pretty bad. And that was it for cycling for me...

...until I got to Japan. See in Japan, cycling is a really common thing for people. It's really convenient, and apart from summer, it's pretty pleasant to ride around. Especially if you live far from a station. Or don't want to pay a train/bus fare (which can be expensive). However, still living in fear of the toppling incident, I refused to learn biking. I had a bike, which I inherited from Dan and Joy Lau when they left, but all it did was to remain outside my house gathering dust. If I had anywhere to go, I would leave home early and walk.

And then, Alpha course with the Shinjuku HC happened. For the Alpha retreat, Karen wanted to go to Karuizawa, and she planned a day outing with.. you guessed it, cycling. She wanted to rent bicycles and cycle all about the old town. And since I was unable to ride a bike, this happened: 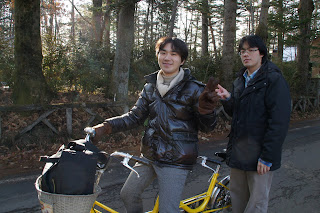 Tomo (Karen's future husband) and me in Karuizawa.
Yes, I had to sit on a two-seater to get around. After some initial issues about how to balance the bike and stuff, the two of us were able to get around pretty well. And no one fell off. And since I was starting to get a sense of balance, I asked to borrow one of the normal bikes when we were going to return it. And I kinda managed to balance. Mostly.

And so now, I know I can ride a bike. I enjoyed riding a bike in Japan, especially since I could get to places that were further away, faster, and without having to pay anything (I was running low on money by the end of my time in Japan).

My dad borrowed a couple of bikes from Uncle KC and Auntie Peggy a while ago, and I got to cycle a bit again before he had to return it. And it's quite fun in Singapore too, just that you start sweating the moment you cycle. You get to see nice places and travel around quite a bit, more so than if you tried walking.