After almost a year since returning from Japan, I am finally going to start work on Monday. I didn't think it would be that long till I found a job in Singapore, but I guess when you're a 'Foreign Talent' who's not really foreign or talented, you kind of end up in the situation I was in. It didn't help either, that most of the jobs on the job search sites were the kind that were not particularly pertinent to someone who possesses a degree in history (read: Engineering).

Thankfully though, there is a company that's willing to accept this 外人, which is why I will report to work on Monday. I have to admit, I am a bit nervous, as I am not too sure what will be required of me. I am glad though, that I will be able to finally start earning my keep and growing my savings account (missionary work, while enjoyable and fulfilling, isn't exactly the best place to grow one's savings), as well as to finally pay off my bond to the government.

In the meantime, while looking/waiting for a job, I was able to do some things. Mainly bumming about at home and running about town, though I did go down to church for a bit to do some stuff. In the process, due to my expiring social visit passes, I had to leave for the bright lights of Johor Bahru twice to renew my visa, both times in the company of good friends. The second time though, we got trapped in a jam on the way over that took up more time than what we actually spent in JB. 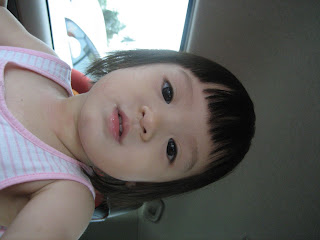 One of the friends. Though it would technically be more accurate to say that she isthe daughter of said friends. I doubt she considers me a friend.

I also went to a couples' engagement party. Alvin Tay got engaged earlier this year (on Valentine's Day, if I'm not wrong. Such a romantic) and his future sister-in-law arranged an engagement party for him and Amanda (his fiancée). It was all pretty good fun, I got to talk to an ex-classmate most of the night, and that would have been about it....except for the fact that the multi-storey carpark had really narrow ramps....which led to this: 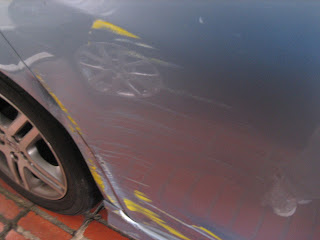 In the immortal words of the Black Knight, "'Tis but a scratch!". In case you can't tell, there was yellow paint demarking the corners of the ramp pillars.

And I went back to Japan for a visit. Partly because I missed the place, partly because I missed Marie, and partly because the company had granted me a second interview then, which seemed to mean that I could potentially land a job. And before that happened, I wanted to go back once before I get tied down. It was fun. Uncle Louis and Auntie Chris were really nice and let me stay at their place, and I had good fun going around surprising a whole bunch of people who never expected to see me in Japan. 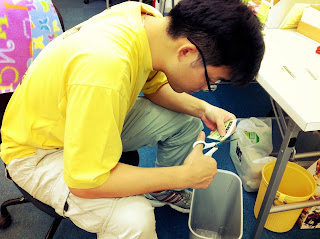 There was also work I didn't expect to do that I ended up doing.

While there, I also managed to get a cd of one of my favourite pianists. I had never heard of her before going to Japan back in 2009, and I think in Japan, she's actually more well-known as an actress, but I fell in love with her music when I heard it on an NHK show about Kyoto. If you ever get the chance to listen to Nao Matsushita, you should. Her music seems to have a certain... melancholy to it that tugs at you, and makes it very suitable to rainy days, or traveling through snow-capped mountains. Don't ask me about the connection. It just fits.


This song was one of those from that show that I watched back in 2009. It was on the cd that I got, and in the first Book Off I went in too.

I had to pay a bit of extra on the plane ride back. I was bringing back all my worldly possessions that I had left in Japan, and besides my luggage and backpack, I had my quiver of arrows. Unlike SIA, which allows you a certain amount of weight in check-in luggage, Delta only allows one free piece of luggage to be sent into their cargo holds. Anything more, even if you're still under the 18-kilo weight limit, will be charged. Bah.

But I did manage to catch one of the Always: Sunset on 3rd Street movies on the plane. I didn't finish it because I started watching when we were somewhere over the Philippines I think, but it somehow managed to evoke a feeling of nostalgia, of the 'good old days' in the 60s, in someone who was born in 1984. Must be the slightly faded colours and the prodigious use of orange lighting. If you're looking for action, it may not be quite your cup of tea, but it really is a rather pleasant show to watch.


From the first movie. There are currently three in existence. Can't you feel the nostalgia?

So that's about what went on for me. Now on to work. Hopefully, I manage to do it in a sufficiently competent manner that would allow me to continue to work there for a while.
Posted by ArkAngel at 12:13 AM