Earlier this month, I travelled up to Japan, to Ichinoseki city in Iwate prefecture to help out a friend with her volunteer work. Emiko has been working there for close to one-and-a-half years, having started off with CRASH and then moving on to the 3.11 Iwate Church Network when CRASH started downsizing and handing over their bases to local churches.

I had served at Ichinoseki base once, in mid-2011, when it was still housed at a camp up in the mountains near Murone village, and most of the work was focused on physically clearing up debris and cleaning houses. Now though, the focus of the former CRASH bases and the 3.11 Network is on community building and emotional support.

I got into Narita at about 9.30am on the 9th on a JAL flight (though the breakfast was strangely tasteless) and since I was supposed to meet Louis and Chris for lunch as well as get back my pre-paid SIM card, plus my luggage was kinda heavy, I decided to take the airport bus to Tokorozawa. Not a good idea though, as for one, I had to pay ¥3,000 for the ticket, while my rail pass would have given me a free ride on the trains as far as Ikebukuro, and two, because the bus got into a minor accident along the way, and the passengers had to wait for the next bus.

I got to Louis' place late, and after lunch and talking with them for a bit, was thinking of how to get to a Shinkansen terminal. Thing is though, I hadn't actually collected my rail pass, and I had to go to get it from one of the major stations. Unfortunately, the most convenient Shinkansen station for me, Omiya, did not issue the rail passes. So I had to travel back into Ikebukuro, and then transfer onto a Shinkansen at Ueno, which took up even more of my time. So instead of being able to meet Emiko in the afternoon, as I thought, I only got to Senmaya station at around 8pm.

After that initial rush though, things kinda slowed down. Emiko, along with a retired German missionary called Helga, were gearing up for a concert by former base managers Paul and Nina Mikaelsen. They had served for half a year in 2011 and had returned to Norway, but were back now to meet people and have the event. So the first few days, while I was trying to get used to the frigid temperatures, we went to the neighbouring towns to put up posters and stuff.

One of the places we did stop at was in Kesennuma city, which got hammered pretty bad during the Great Tohoku Earthquake and tsunami that followed. While most of the temporary housing units were set up to accommodate people, this particular unit was meant as a kind of shopping/bar district to help some of those who lost their shops to continue with their jobs. Can't remember what it was called, but it's right next to the Kesennuma port. A lady there who kindly agreed to help us with our request to put up the concert poster told us that while it had not been too bad, very few people would choose to go there in the winter as it was cold and got dark early, so business had not been that good recently. Still, she was happy to hear that people were still volunteering to help out in some way, and she was also quite happy when we bought some of the things at her store (she ran a small grocery mart). 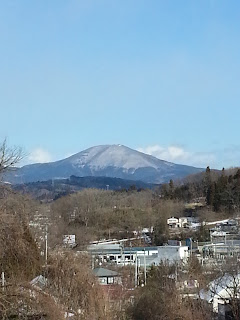 A picture I took while putting up posters in Senmaya town. That's Mt. Murone, which has an observatory and a hang-gliding spot up there. It was quite windy at the spot I took this, making it almost unbearably cold despite the sun, but one thing about winter is that the air is always clear and the sky seems exceptionally blue. When it's not snowing, of course.

As a small town, Senmaya's a rather quiet place. There are two convenience stores, a Lawson and a Sunkus, along the main road running through it, and it offers relatively few tourist attractions. But it does have this historical-ish place called Sake no Kura, which is a sake warehouse that is over a hundred years old. I wandered in one day, and there were some ladies who had rented the place for a function, and one of them, who also does work as a tour guide for the place, explained some of it to me. Or at least, she tried to explain it, considering my lack of Japanese ability. 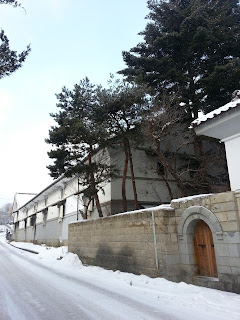 The outside of the warehouse.

The snow and low temperatures did take some getting used to, especially since I had come up from warm, sunny Singapore. I did get some Uniqlo heat tech, which helped (I have to admit, I used to wonder if the heat tech was indeed of any use, since I didn't feel very much warmer while wearing it. I only had to not wear it once though, to realise how effective it is at keeping warmth in).

It snowed several times while I was there, and each time, it wasn't a light dusting of white that I was used to when I was in Tokyo, but rather, a rather sizeable amount of snow, though I'm guessing other places had a lot more snowfall then where I was at.

But after each snowfall, the skies clear up and become the most amazing blue, and when the sun hits the snow on the ground, it sparkles. It really is quite a fantastic sight, but only if you've got on a good jacket and mittens or something.

One of the things we did get to do was to help shovel snow at a couple of the temporary housing units. Many of those who are in these units tend to be older folk, and while most of them are tough old men and women from a hardened generation, they did appreciate it when others came in to give them a hand in clearing up the roads.  The heavy snowfall meant it was covered up an hour later, but they still were glad we shovelled some snow. We also had a cafe while we were there. 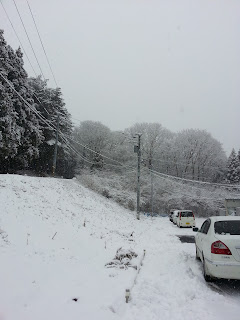 The scene just after we had the cafe and were heading back.


Marie came up on Monday morning. She had served at the base before and knew many of the people and places there, though I would like to think she came up for another reason as well. She brought a couple of the volunteers to several of the events she used to participate in, and was a major help all-around.

Another pleasant surprise was that Kohei Koyama stopped by on his trip. Kohei and his wife Linda were volunteers at Tono base who got dragooned into being staff members while I was there for three weeks in August 2011. They were travelling southward from Morioka, stopping at various volunteer bases to see where God was leading them to serve for a year. However, Linda's mom suddenly fell sick, so she had to head back to Miami. And I just realised I never really talked about my experiences at Tono base. I shall have to rectify that. 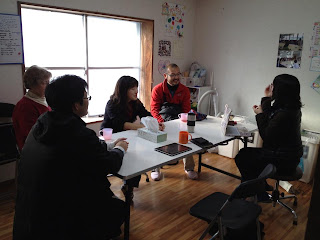 Kohei is the guy in red. This was taken by Pastor Sasaki of the Kitakami church, who is a member of the 3.11 Network as well as a semi-itinerant pastor who takes care of a church in Kesennuma too.

One of the good things about serving at this particular base though, is that Emiko is a really well-known person around the area. When we were going around trying to put up posters, all we had to do was mention we were from a volunteer group and that we worked with Emiko... and the shop-owner's face would light up and they would go, "Oh Matsumoto-san! Yes we know her!" Even though she says she feels tired all the time, one of her great strengths is in building relationships with people around. She doesn't like getting photographed though.

I also got to help out in an English conversation group that had been set up by former base managers. While the managers had already left, the ladies enjoyed the time so much that they decided to continue to meet up regularly. We got to join them for their monthly meeting, which is held in a church's meeting room.

Paul and Nina Mikaelsen came in on the 15th, if I remember correctly, and apart from going around and seeing all the people they had met while serving there, they also got ready for their concerts. They were supposed to be doing three mini-concerts over three days, in Senmaya, the neighbouring village of Murone and then in Kesennuma, further down the highway.

Quite a few people turned up for the first one, even though it was at 10 in the morning on a Friday. Several of them were people they had known from before, and a couple of local reporters also turned up to cover the event (it came out in the local papers the next day).  Their singing is really nice, and they showed a lot of chemistry on stage, which I guess comes about when you're a husband and wife team. While the acoustic guitar was the main instrument for both of them, Paul also used a pianika and a small taiko drum for accompaniment on several songs. They sang several English songs and one or two Norwegian ones, but it was the traditional Japanese enka that got the most reaction out of the crowd. 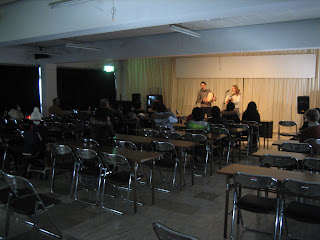 Paul and Nina at the first concert, held at the Senmaya Town Hall.


Here's one of their songs, 37 degrees, which they wrote by themselves, if I'm not wrong.

I helped out on that first day by making Bak Kut Teh, which many of them seemed to like. Thanks should be given of course, to Marie and Kazuma Miura, one of the base friends who had stopped by the night before. They both said it had tasted too light, so they added salt and pepper until it was nice. Unfortunately, I had run out of bak kut teh packets after that, and the logistics involved in doing food at the other concerts had seemed too difficult, so we did not cook food again for the other concerts.

We also got to work with the boys (and two girls) of the Kesennuma High School baseball club. One thing about these kids is that they were always energetic and very polite, greeting people they met along the way and stuff. Marie says this is cos they are taught to greet anyone they meet. At any rate, they helped Emiko by shoveling snow at a few temporary housing units, and then helped her buy daily necessities at a supermarket to help needy families under one of the 3.11 Network's projects (a church in Taiwan regularly sends them funds to buy food for people who really need it).

They also helped to set up on the last of Paul and Nina's concerts in the area. Whereas the lot of us took close to half an hour to set up for the concert on Saturday night, these boys finished setting everything up in 5 minutes flat, under the guidance of their English teacher/coach and their team captain. 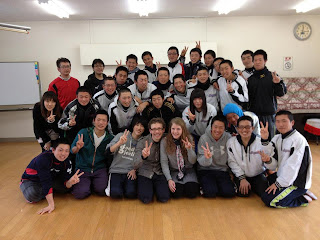 And that was about it. Emiko dropped Marie and myself off at the Kesennuma station on the way back to the base, and we left for Tokyo soon after, where I got to spend a few more days running around meeting people, and spent a night in a capsule hotel.

If you're interested in praying for the work there, here are a few things you may like to pray for:
Ok. That's it from me. Although the weather was cold, the people were warm and friendly, and it was a great experience over all.