It's never pleasant hearing that someone has gotten cancer, especially if you are the person in question. But when the truth of it is out, it's always much better to face up to reality and put a brave face forward.

The morning after I had gotten warded into SGH, several other doctors came by and prodded me and looked at the scans that had been taken of me, and the most senior one in that particular group, Dr. Lai, sat me down (well ok, he was the one that sat down. I was lying in bed already) and told me quite bluntly that in all probability, based on the size of the tumour, I had cancer.

My parents had been listening in on it too, and I guess it sounded almost like the final nail in the coffin for them. It certainly seemed like that for me, as I started getting the feeling that I was sinking through my bed in despair again.

The one positive thing that Dr. Lai could see from it though, was that it seemed the tumour (which he said probably had an infection) was fairly well-contained, my body having reacted to it and sealing it off, which he said allowed him a bit more time to get more info and plan the best way of dealing with the cancer.

My siblings came to my bed after the doctor had left, but my parents didn't really need to tell them much, since they had also been somewhere in the room when the doctor was talking (even though he seemed to think that he was talking softly enough that no one could hear; he had a rather strong sort of voice, that kind of carries even if he didn't raise the volume). Quite a shocker, no doubt, but despite the situation, our faith in God remained strong, and we committed it all to Him in prayer.

At any rate, I was left in that bed for the next few days, and was not allowed to take anything in by mouth, which was a real bummer sometimes, since it wasn't just food, but drinks as well. They kept me on a drip the whole time, giving me either saline or a potassium solution. The downside of this, was that they kept on having to give me new IV plugs when the old ones stopped working, some of which had needles that looked very foreboding, and once, I was left with a massive bruise on my left forearm when the nurse couldn't get the needle into my vein. 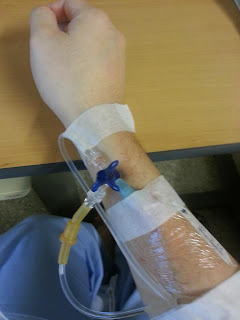 This is one of the larger ones. In fact, I think this is the one that the nurse had to try to put in twice. If you notice, it actually has a valve which allows two drips to be used at the same time. How cool is that?

There were many more upsides to this episode though. For one, the nurses were all very skilled (they only missed the veins one time when putting in needles, and often, it didn't really hurt too much) and very caring. My bed was fairly comfortable, and placed in a decent position that let me see some scenery out of the window. And the other patients in the room were very very nice people.

One of them was Uncle Yap, who strangely enough, was the father of a man who went to our church (which led to knowledge of me being hospitalised for cancer being spread much faster than I had intended). Another guy, an Indian dude called Pala who was warded after me, came in because of shortness of breath, but he also told me his experience when he had a terrible hernia where his small intestine kept on popping out.

But the guy who was the biggest encouragement was in the bed facing me; his name was Mr. Neo. And coincidentally, he knew my mom from some teachers' symposium or other which they had both attended in the past. Mr. Neo had a terminal form of cancer, and the doctors had only given him only about a month and a half more to live, but he did not let that affect him. Every morning, he was up early and cheerfully talking with the other patients, with the nurses, with the guests. He even went visiting a friend's father in a different ward, and brought him coffee and his own breakfast one morning. In short, he was like a great big ball of energy and joy in the room, and he encouraged me by telling me how the cancer I got was easily the most treatable in Singapore, and horrified me by telling how many tubes had been put into him in the course of his operation and his treatment. He even offered to let us use his bed number to get more visitors in, since he said not many people dropped by to visit.

He was only there for a couple of days after I was warded before he checked out and went home, but it felt so much longer than that, and the impression he left behind, the positive face he put on even in the face of something so terrible gave me a lot of strength to push on.

I was also tremendously blessed by having many friends and family members drop by. Mom and Dad were near constants, being there almost all the time, and Hannah and Andrew were in quite frequently too. But there were many church friends and colleagues and former schoolmates and other acquaintances, some unexpected, who chose to make time to come and see if I was dead yet. And as such, I was never bored while I was there, since there was an almost constant stream of well-wishers coming and going. I just hope it wasn't too much of a hassle for the other patients.

While I was waiting for the op, the doctor who was to operate on me, Prof Tang, came by, and slated me for another x-ray, a chest CT scan, and a scope. But at any rate, on Tuesday, one of the doctors in his team came by to check on me, and told me that the operation was to be conducted on Wednesday, probably in the afternoon.

Up til that point, I had actually been somewhat enjoying my time, just sitting around, talking with friends, doing almost nothing, but knowing that the operation was just a day away started to get to me. I started wondering what it was like, whether the anaesthetic really prevented you from feeling anything, and what would happen if the surgeon made a mistake and I died on the operating table.

Fortunately (or unfortunately), I soon did not have to think about such things, as one of the nurses came by with a huge pitcher of an orange-coloured fluid and told me to drink it. Now, I have to admit that the taste itself of the drink wasn't so bad. If I had to describe it, I would say it tasted like an orange-flavoured, salty, warm, slightly thicker type of Gatorade. Which does not sound appealing, I know, but it was drinkable. It was meant to cause me to purge myself of anything that may be in my digestive system, but that wasn't the worst bit of it. The thing about it that was most disgusting was that I had to finish all of it. In three hours. I had to force myself to swallow the horrible solution (which tasted worse each time I drank a cupful) and by the time I was reaching the bottom of the jug, I felt that taking another cup would cause me to puke everything back out, thus purging myself in a totally different way. By that time though, it was midnight (the cutoff time), so I could avoid the last couple of cups.

Wednesday was more of the waiting. A few friends managed to get in before visiting hours, then I just had to wait for the nurses to come and call me when the operating theatre was ready. It almost felt like being in the army, and waiting to go for an outfield exercise. Or waiting to go for the obstacle course (which I really really disliked). The only difference this time was that I just had to go and lie there and do nothing.

Finally the nurses wheeled in a gurney and they put me on it and wheeled me off to the theatre. I guess it could have been a lot more traumatic thinking about what might happen ahead, but the way I deal with possibly distressing situations is to not think about it until it comes to a head.

At any rate, they wheeled me into operating theatre area, and left me at a corner while they went to prep some stuff. They then pushed me into what I guess is the pre-operating theatre room, where the anaesthetist came over and asked me some questions, and a nurse stuck some electrodes on me. They then brought me into operating theatre itself, and transferred me onto the table. I remember looking up and seeing the lights and several hooks (one of which they used to hold my saline drip bottle), and then the anaesthetist came over.

"I'm going to give you the anaesthesia now ok?" she said.

"You're going to use the (IV) plug right? You're not going to jab me again are you?" I was really not very fond of needles by then.

"Oh yeah. Since you have the plug, we'll use it," she replied, leaning over and inserting the syringe into the plug (it had two holes remember).

Now, several of my friends and colleagues had told me that what happens here is that they pump you with the drug, and then ask you to start counting backwards from 10. And so most people go like: "10... 9... 8... 7..." and then they get knocked out by the drug. But I never even lasted long enough for them to tell me to start counting backwards. Before I realised it, I was out.
Posted by ArkAngel at 5:05 PM


It's very great article and i find a nice game plese click this web site.elo boost