It was dark along the river, quiet, with mist rolling in among the rustling reeds.

There was a boat, bumping gently against the pier it was tied to, with a ferryman sitting in its stern, who looked up as he saw a man walking along the river's shore.

The man was quite old, with wispy white hair surrounding a bald pate, a belly that showed he appreciated good food, and laugh lines around his eyes that showed a life characterised by joy.

Those eyes though, were now idly looking at the fireflies flitting among the reeds, their lights leaving little glowing trails through the misty air.

The ferryman did not want to disturb the man's reverie, but as the latter drew closer to the pier, he felt it would be impolite to not announce his presence, so he cleared his throat.

"You're early," the ferryman said.

The old man stopped, looked up, then smiled. "Ah! Hello!"

"I've been sent to pick you up," the ferryman continued, "but there's still some time, so there's no need to rush. I'll let you know when we need to leave."

"Thank you," the gentleman replied, as he moved towards the bench at the end of the pier. "That's very kind of you."

He settled down on the seat, then pulled out a small plastic bag which he hung from the corner of the bench.

They sat in silence for awhile, with the old man occasionally taking out some tissue paper to sneeze into, before dropping them in the bag.

Finally, the old man asked, "Where are you taking me?"

The ferryman indicated across the river with his hand. Then noticing the old man frowning as he tried to see what the ferryman was pointing at, he added, "You won't be able to see until it's time to go."

At that moment, there was a sudden patter of feet, and a crowd of people appeared beyond a low fence that blocked them from the river and the pier. The old man looked up, beamed, then got up from the bench and went over to greet them.

"It's the people I know," he explained to the ferryman, as he reached out to touch them and hold their hands.

They ranged in age from those in their teens all the way up to some who were older than him. Some came from far away; others he had not seen in a long time. But as he stopped to talk or touch any of them, scenes of the old man's life showing his time with them flickered into life in the air nearby. There was the childhood in the kampung, the holidays in Malaysia, the visits to his clansmen in Hainan, the dinners and golf trips and church outings... And the memories continued popping into existence.

Eventually though, only a small group of people, his family, were left. The old man reached out across to hold the hand of a slight, dark-haired woman, then turned and proudly proclaimed, "My wife!"

The ferryman nodded, smiled back, then tapped his wrist, as if pointing to a watch. The old man noticed the gesture, then shook his head. "Wait, someone's not here yet."

The mood was starting to get sombre, as all those around started to realise there was not much time left. Where it had previously been like a meeting between old friends, it was getting more and more melancholic.

It was then that there was the sound of someone's footsteps, and a well-built young man ran up to the fence.

When the old man saw him, his face lit up, and he reached out to grasp his arm. "Thank you for coming back again so fast," he said, of his favourite grandson.

Abruptly, the sky behind the old man started to brighten. The old man started, glanced furtively across the river, then tightly embraced his wife. The ferryman moved over to the old couple, who now had tears streaming down their faces.

"It's time to go," the ferryman said, but the old man did not move.

"It's time to go," he repeated, and still there was no response.

"Stop pretending you can't hear me. Your hearing here does not depend on hearing aids, so that excuse won't work."

At that, the old man straightened up and slowly, reluctantly released his wife, who was now crying openly. But even as he stepped back from the fence, with the sky getting brighter, the years seemed to fall away from the old man, so that he was no longer an old man. He felt strength return to his limbs, his hair grew back and darkened and his body started slimming down. And beyond the physical changes, he noticed that he no longer felt like he wanted to stay; the places he had gone to and where he had spent all his life did not hold any attraction to him and the only attachment he felt was to the few who were dear to him.

He now looked out across the river, and where once it was dark and misty, it was now clear. Another shore was now visible across the river, with what looked like a great, gleaming made of gold, with gates of pearl. And the sky, which was now almost as bright as mid-morning, drew its light not from the sun, but from a source, someone, the man realised, who was on the shore. And he suddenly sensed a great yearning to be on the other side, to bow before his lord and worship in His presence.

He stepped towards the boat, but a distraught sob checked him. He looked back, at the woman who had caught his eye as a young man, whom people thought was a poor match for someone of his status but who had turned out to be perfect for him; who had nagged him and scolded him, but had loved him and supported him...

He walked towards her, reached out to embrace again. Unlike before, she didn't seem to notice his touch, and he realised he was already leaving this world.

Leaning towards her, he gave her a kiss on her forehead, smelt her hair one last time, then whispered to her, "I'll be waiting for you."

Then he strode back to the boat and the ferryman, now with his eyes firmly fixed on the other shore, on the figure standing on the water's edge with open arms. He was going home. 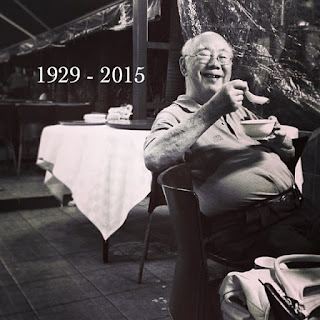 Goodbye Grandpa. Thank you for everything. We'll see you again on the other side.
Posted by ArkAngel at 2:58 AM