I guess I have been rather slow in talking about going to Japan.

Well, to start of, it was early. Like I didn't sleep the night before we left, cos I hadn't packed my bag, and by the time I was done, it was late enough that I didn't see any value in sleeping anymore. Got to the airport, and then had a spot of a problem. First, was that our check in luggage was too heavy. (Not me, because I actually carried a fullpack onto the plane itself, but what with all the extra stuff we needed to bring...) And then, J realized that there might be a problem, as she was Malaysian, and she didn't know she needed a visa to go to Japan.

So we cleared Singapore, and we got onto the Northwest flight. I had gotten some pretty bad reviews about NWA from my friends, like how they said that there was only a single tv screen per cabin, and it didn't work, and how the food made army food taste good... but surprise surprise, it was actually very much like SIA. Maybe cos this was their Airbus A30 or something, maybe new plane? I dunno. So here's a couple of pictures.

This here is the tv. 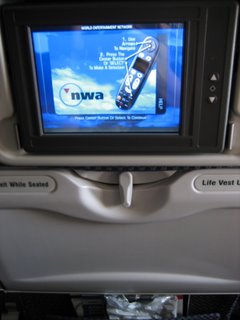 And this is my breakfast. Looks very SIA-ish, doesn't it? 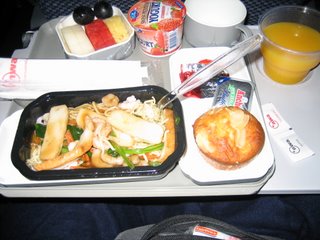 So anyway, me, J and M touched down at Narita, and then the real problem started. Me and M ended up waiting a couple of hours for J to clear the Japanese immigration, but by the grace of God, they gave her a 90-day visa after Uncle L spoke with the officials. Then we took the train to Nippori, transferred to the JT Yamanote Line, took to Ikebukuro, and then transferred onto the Seibu-Ikebukuro line to reach Tokorozawa. Got there in time for the youth church that is held on Friday nights.

Anyway, can't really remember a lot of details. And when I do, it wouldn't quite be feasible to put it up, cos there's way too much, so I'll just talk of a few instances.

God was really very gracious throughout the trip. He always provided for us, whether through the study of His word, or the people who were there. The people at the youth church were a great help, since I am argubly the most fluent in Japanese in the team (I'm not being arrogant. It's a fact. Haha.), and I cannot even hold a simple question and answer dialogue with anyone. Oh, and just in case you do know rudimentary Japanese, and think that's enough, you can forget about it. You talk to them in that little bit of Japanese that you know, and they automatically think that you are really a fluent speaker, so they blurb back everything to you in normal speed Japanese, which is really rather fast, and you probably won't understand.

But anyway, God showed His mercy, when Uncle L left his laptop bag outside the house, and we went to Saitama, at Urawa station. It took us 1 1/2 hours to get there, and then he realized he left it outside the house. S said he would go back and help him take it, so he drove back while we went to another karaoke place. And then about 2 hours later, he messaged back that he found the bag with laptop.

Oh and the karaoke place just mentioned, they've got this drinks station. 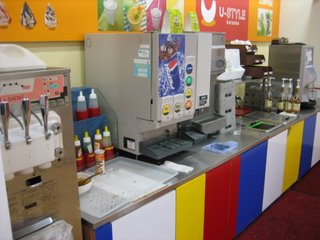 What's so cool about it? Well, there's hot drinks, and cold drinks, and ice cream, and soup. And it's free flow.

Finally, I shall show the only sunset shot I managed to acquire. It was at the bridge near Uncle L's place. 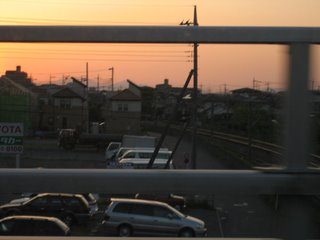 Yeah. The night before we left, we went to onsen, which is really great, and then while outside Tokorozawa Station, the people from the youth church and the team stood in a circle and prayed. And it was really great.

Then we left, and I waited 3 hours till A and Al left for the Philippines with their MEET team, and I had to take a cab over from Terminal 1 to the Budget Terminal and it cost me close to 8 bucks, which coincidentally, is actually more expensive per km than my flight from Narita. I calculated wrongly last round at M's blog, but now I realize that the cab fare (@!&^$#) was going at $2.63 per km, but my flight cost only $0.07 per km!! Rip-off!

Cheerio
Posted by ArkAngel at 3:59 PM

i never knew that anyone would calculate like that...

I would calculate like that, simply because it irked me that I had to pay $8 to travel 3 km.

i thought you were mad to wait such a long period of time.. but it's interesting to know that we cab into changi, while u flew in by plane. anw, that sounded like a great trip. :P

hmmm..am preeetty sure Gabriel would hav somethin 2 say bout all dat fare costin..welcome back home..2 Singapore..i nearli said Australia..Lord have mercy on mi a sinner!!