This is primarily due to the fact that I've got come down with some sort of bug that gives me stomach spasms and gastronomical gases. Which is very irritating, since I'm actually in my most comfortable position when I am in a sort of half-bow. It's not fun to try to keep yourself upright so as not to look like a sot.

Plus, the afore-mentioned gastronomical gases have actually given me something that resembles a small beer gut. Which is irritating, since I actually have abstained from alcohol since September 2003. Didn't really take alot to convince me of course. I'm not exactly fond of beer. And I don't know how people can sip wine and say it's good when sparkling grape juice tastes so much better. But that's besides the point. At any rate, I can be thankful that most of the time, the gastronomical gases (this is so hard to keep on typing. I think I shall just call in GG.) have usually manifested themselves in the form of burps, which while highly impolite, is still a damn sight better than if it came out from my bottom. (Alright... damn smell better, though not by much.)

What is also irritating is that on the bus from Tampines to church earlier on, I also felt like puking. Cos I was trying to alleviate my suffering by trying to force myself to burp (I was discreet and polite, so no one was offended. I think.). Anyway, that started to make me feel like I wanted to release my lunch all over the floor. And every bump the bus went over made it worse, since the bus doesn't exactly have excellent suspension systems. Thankfully, I had just purchased Cowboy Bebop and so I hurriedly grabbed the plastic bag and put it in my pocket, after asking God to help me hold in the lunch till I at least managed to get to church, which He did.

What is more irritating is that the GG and SS (stomach spasms, not social studies, or SchutzStaffel or Segregated Socialists or whatever else you can come up with) turned me into an almost total wimp, as the peeps in church can testify to. The last time I was this sick was when I went to Starlight in 2003. And for the 3 hours that I was in church, essentially all I did was to sort of loll around, usually with my head on the blue circular table outside the kitchen where S and L were doing work.

Here I must mention that I'm really grateful for all the people in church who tried to make me feel better, like F and S who were talking to me, and Y who tried to comfort me, and J who thought I might have gastric and told me to drink milk, and Su, JN, V and L who screamed at me not to drink the milk, but almost gave me a heart attack in the process, and R, D and A who just asked if I was feeling better. Really grateful. But I guess I seemed like an ingrate earlier on, since I was in a sort of stupor most of the time. haha.

But, the most irritating thing, is that I'M NOW AT HOME TYPING OUT THIS ENTRY AFTER HAVING SEEN THE DOCTOR, WHEN I COULD HAVE BEEN WATCHING X-MEN 3!!! Bleah. Plus, the doc told me that I shouldn't eat oily or fried food. Where's the fun in that?

On a side note that is totally unrelated, look what I managed to get in Woodlands yesterday evening. 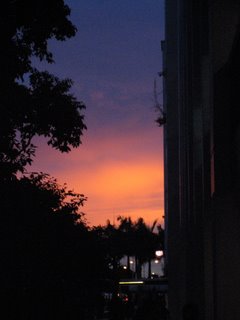 Cool, yes? We were going to Yew Tee to eat dinner and celebrate Y's birthday.

Cheerio
Posted by ArkAngel at 10:15 PM

good gracious, you are SO sick!

and u still have energy to blog ah?

my condolences Dan..i'd send u a Get Well Soon Card if not for shippin charges n by e time it arrived i would b home in Singapore for Christmas..so, Recover n Rest well..Xman 3 was weird btw..

all that burping made me think that you are starting to resemble adrian more:)