Got this from MS's blog.

Which of the X-Men Are You?

On another note, I just sort of returned from Global Day of Prayer, which was pretty cool, even though it was pretty warm. Aiya. You get what I mean. Even though I was expecting more individual prayer time, and less worship, because today's one seemed more like an FOP than a prayer meeting. But it was still cool. And the worship was pretty powerful. F was especially happy with the bass, with the 'multiple sub-woofers'. So here's a pic of the stage. It's not very good, since I'm only an amateur photographer at best (i.e. no tripod) and my Canon Ixus has only 3x zoom. But well. 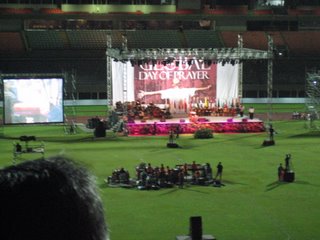 Oh, just fyi, we were at the National Stadium. Where I got this. Quite spur of the moment thingy. 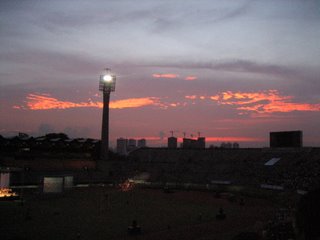 Just to note that these were bad examples, since during the prayer session, we prayed that we would not allow distractions to get between us and God... Really didn't take me long to forget what I prayed about... really bad...

And finally, on a totally unrelated side note, this is E and J. J is very happy, because E just bought for him the can of Seasons' chrysanthemum tea, which E has apparently never done for J before. So J got a big kick out of making a big deal about it. 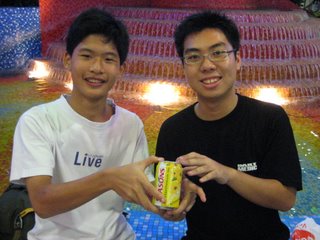 Cheerio
Posted by ArkAngel at 12:52 AM

i was there too! at the global day of prayer, that is.