Just returned from the VCF IFG planning retreat that was held in church. So I'm kinda bummed. And if I start losing coherence along the way, please be understanding.

It was mostly ok. The fellowship with each other was great, whether it was between old people, or new people, or the staff workers. And we all played a bit of floorball, even though A got hit in the face by a stick and broke his glasses. But he was ok, and he still played after that anyway.

To be frightfully honest, when I joined IFG, I was expecting it to be like SF, as in like there's the Exco, but there's also a large bunch of members who would be like forming the bulk of the SF community. Which was why when AF asked me to join IFG, and kept on pointing out that I could help JS in her ideas to start a Japanese outreach group, I didn't mind joining, since I thought I could just play some minor supporting role for JS. Then JS pointed out during the camp that it appeared that we all joined the Exco for IFG. I guess I had gotten so carried along with the whole planning thing that I didn't realize that was what we were doing. And it wasn't exactly why I joined IFG. Or at least, I was given the impression that if I joined IFG, I didn't have to be doing like something major, since as it is, I am already committed to Youth and Worship min in church, along with BB for SAS, and then I am a student too. And as it is, I'm barely surviving, much less take up a major role in a VCF sub-comm. Of course, now that I've committed, if C really needs the help, I'll do the work. But I might, like, drop to a 2.50 or something.

But C and S were really nice about it, and said that since some of us had gotten the wrong idea, then could we all just please go back and pray about it and see if we are able to take up any of the major roles, and if not, it'll be ok.

So anyway, that was two nights where I slept late. You should see what the few of us who stayed behind were doing. 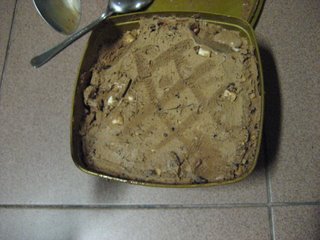 Yes. This is P and G playing tic-tac-toe on a tub of Rocky Road ice-cream that X bought for us to eat, but we were too full to eat it straight after dinner, and so some of us ate it later.

As some of us know, due to a bad encounter with a certain lady who is uncertain about the goods she sells, JS has a particular aversion to tao sa paos (red bean paste buns). However, she loves lin yong paos (lotus seed paste buns). So one morning, when me and C went behind church to eat breakfast, C called JS to see if she wanted to eat anything. And JS said she wanted a lin yong pao. This is where the fun started.

Me: Hey, we got you a packet of milo to drink with your pao.
JS: Oh! Thanks so much.
*Opens paper bag with pao*
JS: Wow. The pao looks so nice!
Me: *Desperately tries not to giggle.
JS: *pulls of a piece of pao, gives it a strange look, and takes a sniff* Hey, is this...? *takes a bite* HEY! THIS IS A TAO SA PAO!!!
Me: *bursts out laughing*
JS: YOU'RE TERRIBLE!!! YOU KNOW I DON'T LIKE TAO SA PAO!!! *looks miserably at the tao sa pao and contemplates eating it*
Me: Well, good thing I bought you a lin yong pao too. *gives JS lin yong pao*
JS: TERRIBLE!!! *glares at me*

Oh, and I went to the airport to meet M's MEET team. I was holding M's phone, cos that time when he left, he forgot to give it to his mum when she left, so he left it with me. So I went to pass it to him. And say hi to the team as well, who all had to some degree or another, had a case of the sniffles, as in like, flu sniffles, not sentimental sniffles. Ya well.

There. That wasn't too hard now, was it. I don't even think I coherent lost sleepy arglebargle $&1...

Cheerio
Posted by ArkAngel at 12:52 AM

how can u fool JS like that..... tsk tsk. but it is quite funny. hahaha

Just to note that my phone seemed all so big and foreign to me when you handed it back - like it was some piece of alien equipment - that's what one month without it can do to you...
And thanks again for helping me to take care of it and to fetch us at the airport - sorry i had to rush off so soon, see ya...