Was trying to see why I suddenly had an attachment to my Singaporean citizenship, and I think I know why. Essentially, for two and a half years of my life, that pink IC was one of the things that kept me going. (The others being weekends, the threat of DB, girls, my buddies inside, and well, just making sure I did a good job for God.) But I digress. So anyway, most of us guys 'suffer' for those 28 months, before we are finally reunited with that little piece of plastic when we ORD. And when we finally get it back, we gain a great deal of satisfaction, even though for me, the mug shot there is of a significantly chubbier me (which certain people remember me by, but I digress again.)

So that's it. I didn't like the idea of giving up that pink card. You can actually see how much I managed to change through army here: 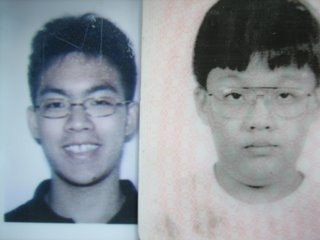 Now, just in case you are a total sot, the picture on the left is me in my university matriculation card, which, though I know is no Brad Pitt, is significantly better than the one on the right, which is what is on my IC, lately of my possession. And A didn't recognize me until she saw my IC photo.

So anyway, I went down to ICA on Thursday to give up my citizenship. My parents said the guy at the counter seemed rather cold when I went there and told him I was renouncing. And personally, I wouldn't blame him, since most of the people who came and saw him about renunciation (please note the spelling, it's not renounciation, much as pronunciation and denunciation are the correct spellings) are the guys who are trying to escape NS (like a certain pianist who deserved a whole lot more than a measly $3000 fine). But anyway, he said I needed to clear with MINDEF. And I gave him a 'huh?' look and asked why. And he asked if I had done NS. So of course I told him that I had.

This of course changed everything, and he started talking normally. (You must realize, however, that this is what my parents said they noticed. I can be very dense when it comes to certain things.) And then when it came to the question "Why are you choosing to emigrate?" in the checksheet, all the reasons there were not exactly positive. Things like "The cost of living in Singapore is too high" (which is one of the milder ones) and "Singapore is too rigid" (Wonder what they're referring to. Go figure.) So I ticked "Others". Reason filled in was "Because I can't keep dual citizenship", which is totally true.

So that was that. I met the lady who was dunno some registrar of oath or something like that, and essentially, she watched me sign the document, and far from what I imagined, I did not need to say an oath or anything.

So that's that. I'll be an American foreign student. How appropriate that I'm in the VCF's International Friendship Group.

And God has been gracious in that the people at NUS are helping me, so that hopefully, I can apply for the Foreign Student's Grant before the application closes. God has always shown me His mercy and grace, and I find it sad that I've not really been able to live a life that's pleasing to Him. Bother the fact that I'm a fallen being.