Long time since I wrote. So I will be lorsor and talk abit on some of the stuff I've been doing.

Well, first would be the Youth Day worship stuff. Cos this time round I was playing bass guitar, and it did take up quite a bit of time... ok well, definitely more than a Yachad practice, since we had like 3 big practices. And I found out the new best way of getting bass riffs. Used to be I would plug in my iPod to my dad's speaker system in the study room, since that one has a sub-woofer. But it takes quite a bit of straining to listed to the bass lines, since the speakers are really good quality ones. But the new best way, is to disconnect the two speakers, so there's only the sub-woofer to listen to. So although it sounds kinda muffled, it is alot better, cos I don't have to try to cut through the rest of the music.

So anyway, I managed to get most of Let Creation Sing, and Evermore. And I had to go and modify a couple other songs a bit. As in like modify it so that I can play the songs with my lower order skills. But the worship services were really good. And I'm glad that I put in all that effort, cos it's not right to give God sub-standard work. And the Open Sunday after that was really good too. As in like it was well-planned, and the games were fun. And we had refreshments. Heh.

Next major event was the prep for the VCF FOC and the IFG vid. Which was on Monday. So I headed down to school, and we had a short briefing, and I met my OGL I, before PP had to grab me and JS to go and do the vid. While there, we had lotsa fun laughing at each other, esp since JS looked like a psycho in her video, where she was acting as a student from India. They wanted me to do the Japanese bit, since I can speak a little Japanese, tho JS thought I could have sounded like an Irishman if I wanted to. However, since I definitely look more like a Japanese than Irish, it was pretty much vetoed.

Then there was FOC proper. To be frightfully honest, I wasn't that keen when I woke up at like 0545 in the morning. I really wished I hadn't signed up for the camp. But well. Went down and met I at Clementi macs, where we picked up A. Then we went to school and met the rest of the group. Who were really fun. There were ice-breakers, and then the faculty orientation, where I met JS sister who looks like N. Haha. Anyway, we showed them green tables, and then wandered around campus. Me and D. With GS and LJ. Yeah. D and LJ were in my group anyway.

After that was the exodus to SU campsite at Sentosa. We went on a shopping spree in the co-op before we left. Oh and the weather was really hot. Like burning kinda hot. Like I-will-sweat-even-though-I'm-standing-still-in-the-shade sort of hot. yeap. But we made it there without any casualties, and then had theme talks by E from Covenant.

Oh must tell of the good news. Cos WEFC youth leaders' retreat was there, and well, the SU building is still the same lah, but the Palawan Beach has been renovated. Yeah, I know. A renovated beach, such a novel concept. But the toilets there are like really nice now. It's open (not flashing kinda open lah. You get what I mean), and it's clean, and the showers are like mist-sprayers, so you get water coming out in a big mist cloud. If you don't know what I'm talking about, one day you just go there lah. And the restaurants and 7-11 building has been landscaped into something really good. But ok.

So yeah. The games, esp Lost? was really well-planned. And we had fun running all over the place, even though as I have said over and over again, the primary objective of Group Solomon was to get to Ben & Jerry's and eat ice cream. Which we managed to do. I was so happy to be able to get Chunky Monkey... But anyway.

The theme talks were really good. E is a really engaging speaker, cos I managed to stay awake even when I was sleepy. And he was talking about being witnesses on campus, and about how we need to walk our talk, and how to stay away from evil, and about how we need to have initiative to reach out. And I felt it was applicable, even though I'm pretty certain it'll be a challenge for most people (inc me).

Then we had finale night where we had to do an act based on the movie The Matrix and the concept of humility. So we had quite a lot of characters. Like... 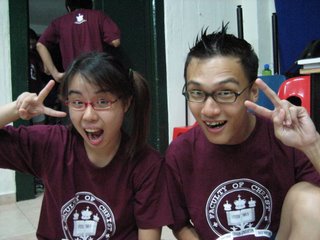 Bunny girl and the Dean of arts! (I'm pretty sure you can tell which one is which) 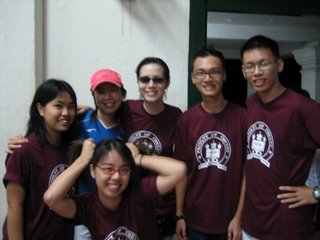 And Trinity! (The one in the center at the back) And fyi, this is half of Group Solomon. The other half is sitting on the floor, taking the picture, or had to go home.

Well, that's about it. We broke camp earlier today, and we left for Harbourfront to eat lunch, and ice cream (a pity we couldn't get B&Js, but NZ natural isn't too shoddy), before heading home, where I got to speak to Db cos she's one of the quieter members of the group.

Oh and what's this? I have to really wonder... 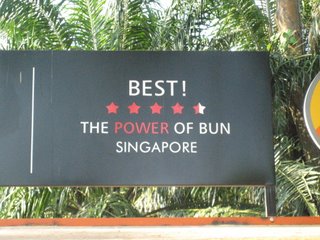 What in blazes is the Power of Bun?! Can someone please explain to me?

I'm just glad everything is in God's hands. And that He's sovereign. And I'm also grateful for the blessings He provided for the camp, and for the friends I've made. I kinda miss them already, as in like the fellowship that is everywhere, cos at home, there aren't quite that many people. Though I don't miss the lack of air-con in the un-ventilated bunk at SU.

Cheerio
Posted by ArkAngel at 11:39 PM

why didnt u mention that i kept bumping into you of all people.

I'm sorry Meisi. Yes, I kept bumping into Meisi during the camp. Mostly, it was because our bunks were next to each other. I think that's a pretty practical explanation.

but i dont see myself bumping into other guys from your bunk, for example, dean.

it's pretty freaky, if u ask me. and i ended my day with bumping into you on the NEL train too.

lol. u nv mention what the two of us kept doing..we kept hey-ing each other for 4 days. haha!!! such pointless coversations.maicie's so funny. haha if u need to explain tt, then i gotta find an explanation why i kept bumping into rachel also. tsktsk. haha.