And now my 2nd year as a university student has come to an end.

OK, so it really ended on the 2nd of May at 3pm when I walked out off my seat and started talking with K about the Japanese exam that just finished. It wasn't quite as hard as I thought, which can be both a good thing and a bad thing, and unlike what M confidently stated, 経済and 政治did not come out in the kanji section of the paper.

And unlike the previous time, I was not quite so free as to be able to post things in the middle of the exam studying time. More like I couldn't spare the creative juices to think up of how to write a post. That is not to say, however, that I did not engage in some mindless, random entertainment during the study period. It can be clearly evidenced by this picture, where GY and me balanced 4 M&Ms between two other candy-biscuit-chocolate thingies (I forgot what they're called). 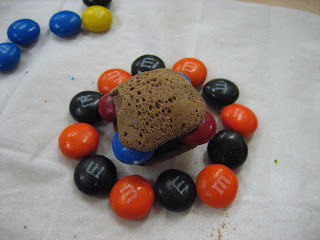 Didn't really get a lot of time to rest after that. I mean, I went out to buy a game, and stayed up late, but on Thursday, I went with F and PS to Batam for a recce for the church retreat. The place was ok, but we did see a place that PS remarked looked suspiciously like the Bridge on the River Kwai. 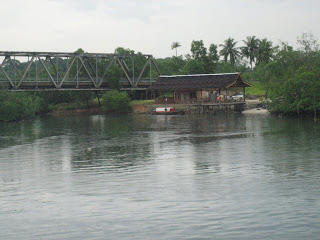 Next day, I went down to school to play basketball with L and friends, where I both found out that my basketball skills had seriously detiorated (not that I had much to begin with, but yeah), and that even playing under cloud cover can get you a serious case of sunburn. Had basketball again in the afternoon, and at night went for night cycling with the peeps from VCF. It was really quite fun, though I very nearly fell asleep while being R's V-com. Had to buy coffee to attempt to stay awake.

Sat and Sun had to play for worship. Was really quite zoned out cos of lack of sleep, so am really qutie grateful to God that I didn't like fall asleep during service.

Monday was games day plus FG plus AGM for VCF. Would've gotten sunburnt again except I was already sunburnt, so I didn't get quite so badly burned as some others I knew. Oh and after the AGM was the first time where suggesting to go to Jalan Kayu for supper was actually a viable option, cos there were enough people who stayed nearby who were eager to go. Except for C lah, he stays in Clementi, but came up all the way for prata anyway.

Spent Tuesday baking some cookies, bringing Grandma to SGH for checkup, rushing back to finish the cookies, and then go on down to 3rd place for yet another VCF event. Was kinda tired, so was a little bummed there. But eventually, it was ok. Wednesday I just stayed at home.

Thursday was going to JB day. Organized by A, for some VCF people, we all went across the Causeway to do shopping. Or at least, we all went across the Causeway. The shopping bit might not have quite been done by the collective 'we'. Sort of the 1st time I went there just to do a spot of shopping and staying in Malaysia for less than a day. Oh and also one of the few times there was someone else (in the form of LJ) who was forced to go to the 'All Passports' line instead of the 'Singapore passports' one.

Oh, and this is really old news, but the Mavs got knocked out in the 1st round. Which I felt was a bit of a bummer, since I would've thought that they could have actually won the NBA championships. Oh well.

And finally, couple more photos. Like this one, which was taken by my titchy little Ixus 55. I like the way it can have that sort of 'bowl' effect. Cool huh. 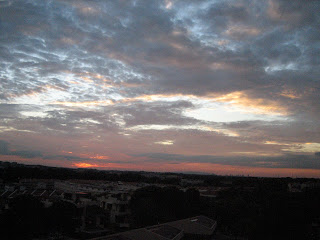 Yup. Just another one of those sunset shots that I was able to get from the balcony. Naturally, Dad was shooting using his massive EOS 500 thingy to shoot. Oh well. Just like fire in the sky. 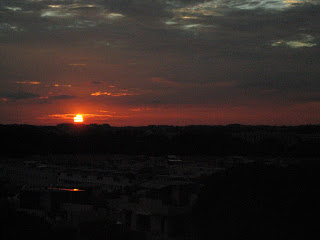 Cheerio
Posted by ArkAngel at 10:44 PM