Today I was kinda happy, because I managed to find a very nice dvd at HMV and got it at $30. Think it's a classic show, first saw it in Japan with Uncle L and family, and I believe that it had a great deal of influence on many of later movies. If I'm not wrong, it was made in '80s. I even bothered to take a picture of it, so as to show you all this wonderful masterpiece: 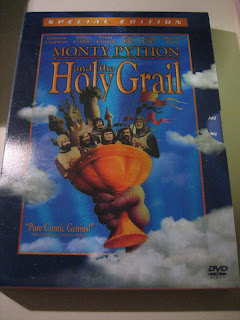 Haha. So anyway, I went down to town today because I was supposed to be having a meeting with C and HS and Y and a lady from Nav called J. Which was ok. Went to Soup Spoon for lunch, then almost fell asleep during the meeting... Good thing C was there to provide relevant input. Well, after the meeting, we went shopping. OK, more accurately, C and HS went shopping. C said she deserved it because she got deprived for a whole semester.

So after she got her track pants, and got a dress or something from M)Phosis (or is it M(phosis)? I'm not sure which side bracket it is), we went to this place to get ice cream. And it was here, that I got cheated. See, when I went to Japan, and went to the Karaoke places and stuff, there is this drink called melon soda, which is a nice green color and has a maraschino cherry on top. Really nice stuff, even though most of my team-mates think it's way too sweet. Anyway, it's a little hard to find it in Singapore. (I guess the closest is F&N Fruitade, but even that's hard to find now).

So I was pleasantly surprised when the menu in that Japanese restaurant had a picture of a melon soda with ice cream. Naturally, I ordered that. This is what it looked like: 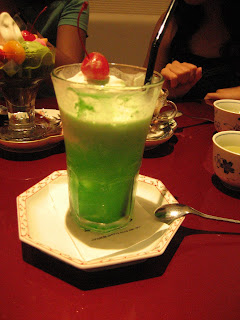 When it came, I offered it to HS first, and then after she had a sip, I passed it to C. Then HS asked me, "Are you sure it's melon soda?"

I certainly thought so, but C also remarked that it tasted more like some syrupy thing, but definitely not melon. Not beliving them, I took a sip myself. To my horror, they were right! It didn't taste like melon soda at all, even though it looked like it. It tasted more like... blueberry!

Ice cream was nice though.

Cheerio
Posted by ArkAngel at 10:06 PM

how bizarre - if anything was blueberry-flavored, you'd at least expect it to be blue in color wouldn't you...

Oh, and btw i hated fruitade while it was still around - so its absence will not be missed by me heh...

haha. monty python! thanks to me. =P