Have finally managed to cast off the shackles of laziness, apathy, and too much work, and now am able to add another post, which has some pictures, and promises to be a tad long.

So anyway, I was embroiled in the church retreat planning committee for quite a while prior to June. It wasn't overly difficult. Or at least, it wasn't quite as bad as what I thought it would be like. Then again, maybe it's because PS and A did a heck of a lot of work on it. (Though admittedly, sometimes PS does too much work on it, esp cos me and F have already done a sufficiently acceptable job). A few last minute changes nearly sent PS through the roof, but he didn't get a stroke or anything, so that's ok.

Handled the transport side, which wasn't too hard, except that it's a whole lot harder to control church people than like army guys. Had to be a little flexible, esp with regard to the buses on the return trip.

6th-9th June: Church Retreat. The retreat itself wasn't too bad. The place was ok lah, here's a photo of the place: 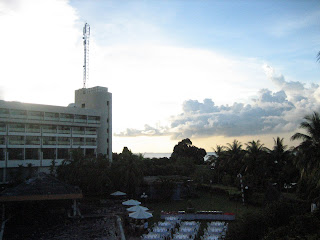 Here's a picture of the place from the room on the other side: 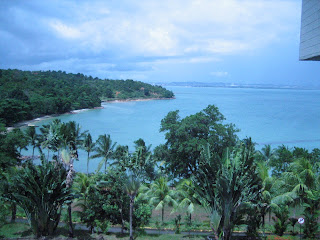 Of course, some of the peeps thought that the food wasn't that great. I mean, it was edible, but nothing really fantastic. Rev G was pretty good, both at the pulpit and on the guitar. Almost every thign went by without a hitch, kudos to the hotel staff, F and PS who was almost permanently on the verge of a stroke. Maybe only the final night event was not quite as interesting as we hoped it would've been. But thank God that it went well, and that most people had a good time, got to relax, and found a bit of time to connect with Him again. Without Him, it would've probably collapsed a long time ago.

Sub-point to note: I managed to crack my phone cover a second time. So now it has almost symmetrical markings on the face.

As mentioned before, the return trip to church was a bit of a hassle, cos we returned a bit late, and I had to scrap the nice arrangements I had made wrt bus seating and just stuff as many people as I could onto the buses as they came. It worked out, in that no one got left behind; additionally, the last bus was half empty cos I think I stuffed too many people up the first few... haha...

Service on Sunday was ok. Had more or less recovered by then, and it was good to be able to just attend service and know that I did not have to do anything after it. Supposed to have CG outing to Queenstown, but had to stay back to help the floorball comp, since I had already agreed to it before that. After that, I had to quickly rush down to City Hall to pick up T's birthday present, since she was gonna be leaving the next morning for Thailand. Was a little zoned after that, but well.

Monday was a fun day. I met lots of people. Started with me going out early in the morning to see J's Thai team off. J actually got caught in a traffic jam, so good thing he planned ahead. After that, lefft with JH westwards, though JH got off at Eunos to repair his graphics card (found out later that he couldn't), and then proceeded on to Gombak. Paid a short visit to Su cos she was sick from the retreat or something, then wanted to update my account at BBDC, since I had changed my citizenship, but forgot to bring my passport and student pass card. Bummer. Followed that by finding Su and C and E around Gombak for lunch, then left with C bound towards Bishan.

Bought some stuff at Bishan, and tried to burn a bit more time, but couldn't really do it very well, then headed over to AMK hub to explore a little. Ended up sitting in the basement stoning, as is my wont when I've got nothing to do, and saw P walk past. Later, after I linked up with Sh, we ran into her again, and said hi. Finished off that trip with ice cream, and then gave Sh her birthday present, then went off to find Mum and Dad.

Oh, and got me new phone. The afore-mentioned phone which I cracked was getting wonky again, and my parents told me might as well pick up a new one. So I went down to Compass Point, and ran into my good friend KW from army at the M1 shop there. Anyway, this is my new phone: 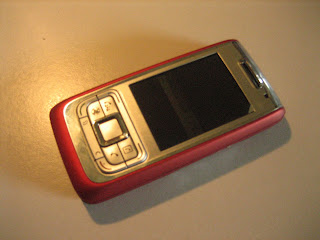 It's got like almost as many functions as a computer. And it's pretty chim. Pretty big intelligence requirement jump from my previous phone. But the great thing about it is that I can use it in Japan! haha woot.

So next day, I went down to the airport again, cos this time, Ji's family was going to Thailand. After saying bye and all, went with JH (who came again), Jo and V for lunch in T2. It wasn't very great, and suffice to say that on that particular day, this slogan: 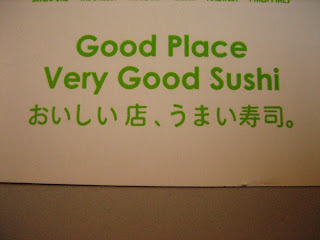 Was not very true. Especially the second half. うまいじゃないよ。。ちょっとまずいと思う。

Wednesday was when I did this: 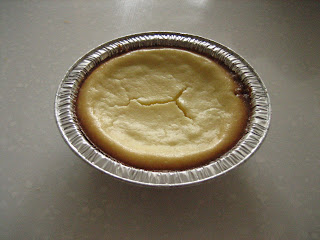 No, 'tis not an egg tart. 'Tis me first attempt at cheesecake. And so far, no one has gotten any stomachaches yet, so methinks it's ok.

Yeah, that about summed up my week. Went down to the airport (yet again!) this time to send Ad's team off. Kinda zoned now cos not 'nuff sleep, maybe I'll go rectify that problem...

Cheerio
Posted by ArkAngel at 11:50 AM

someone ought to give you a prize for being the most loyal supporter of ppl going overseas.

Actually, you should just swop houses with ryan. saves you all the trouble. I promise you, in 4 years time when you go japan for your longer trip, i'd see you off. If i don't, you have permission to clobber me. haha. then again, how would you do that when you're in japan? hmmm. you've 4 years to think how;)