I have much to be thankful for over this few days.

Most obviously, the first would be that the MOE SM3 camp went off today, and nothing major cropped up... for a while.

OK, must explain a bit. See, I personally don't think I did a very good job on it, since I would have definitely preferred to have had more prep time, as well as have everything totally settled, so that I can act all nonchalant about it during the actual running, since I would have known that everything was in place.

This time, however, it was a little different. Cos first, we only got the go-ahead from MOE in mid-November, which if you are a uni student, is not exactly the freest time to do an external camp project (read: project datelines.. or is it deadlines?). So it didn't start off with a bang. And then, at the end of November, that's when exams start, so it's also not a good time to do more than just a bit of planning. (Oh, btw, I did ok for the exams. Nothing great. But I passed!).

And then December was kinda busy. Like I had quite some stuff to do. So by the time I came back from Telunas, I had like 6 days (which coincidentally, is how long V is staying in HK) to try and complete the camp program. I mean I had the rough framework up by the 12th, I think, but it wasn't complete. Like, it wasn't complete enough for me to be able to let things go.

Then I fell sick. Was pretty bad on the 26th, slightly better on the 27th. And that was when I felt that quite possibly, I would have to ensure the camp would be able to run without me, as I might not even be there.

I believe at that point, when I was like kinda dead-ish, God decided to step in with all His power to help complete the camp prep. I mean, we were praying and all, but that was probably when I and all the other comm members really turned it over to Him to make things work.

So today, there were no major problems in the morning. I mean, I went to a doc to get medicine, and by the time I got down to Palawan, all the camp helpers were there, and C had given them the final briefing, and they were all praying, and R and L were setting up the group logistics. The campers came about half-an-hour later, led by Ri, SK, G and WX. I mean, the fact that we suddenly received replies from people volunteering in the few days between 24th Dec and 27th shows God's provision already.

And you know how I know God was really involved? Well, this was the first SM3 camp I've attended as a uni student that was like brilliantly sunny. Ok, it was more like scorchingly sunny, and I bet I've got a bad sunburn, just that it hasn't reached my nerves or something, but yeah. I mean, it was a nice sunny day for all of us to run around and play games. 1st time in 3 years. So most of the peeps had fun, playing games like Hunter, Fire, Earthquake: 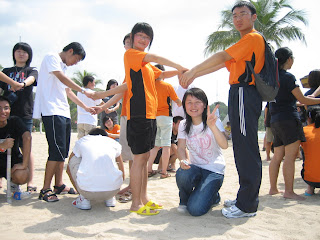 And the balloon stepping game, though I must say I was rather disappointed at the quality of those &@#*^@$ balloons, as a bout 2/3rds of them popped or let out air the disgusting things. No fault to L, but to those lousy QC people who aren't doing their jobs: 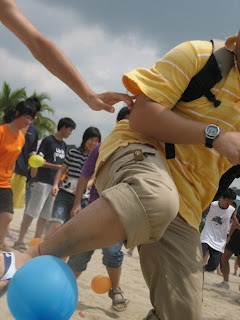 And also many other games that were either taken from last year's camp (which the students enjoyed previously), or which I pilfered from various Open Sundays. (Thanks guys, for the piracy lawsuits I know you're not going to level against me).

So all the games went ok. No one got heat exhaustion, no one drowned, only two minor injuries, and at about 5pm, when we sent them all off to shower and get ready to go for dinner, we all were able to take a well-deserved break from work: 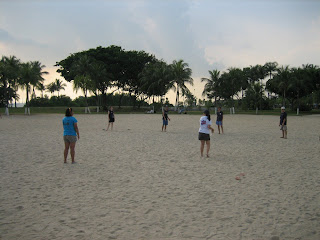 Or, at least, they were able to play a bit. I was kinda zoned, and somewhere during the course of the day, I lost my voice, and acquired Gary Busey's.

So everything was going more-or-less according to plan.

C was able to catch frisbees: 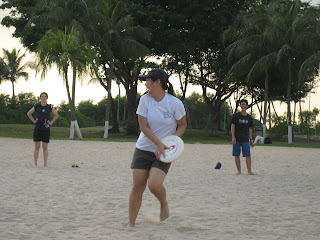 Everyone was having a grand time: 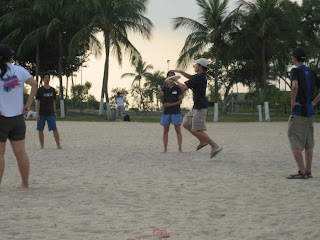 The sun was, er, shining brightly behind some clouds... 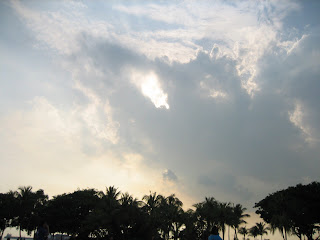 That was when disaster struck. Due to a matter of miscommunication between yours truly and MOE, there would be no buses to bring all the students from Sentosa to Marina for their dinner.

Now, having served as an MTO for 1-and-a-half years, this is arguably one of the worst scenarios that you face. You screw up, and 200 people are left stranded without buses. It's even worse than having to come up with WITS suggestions in 5 minutes. Worse even than realizing that you failed 2.4 by 2 seconds. It's really.... badong (hahaha).

So that was when we had to scramble. And so R and me finally came to the conclusion that 'boh pian, must give the SM3 students a crash course in Singapore Public Transport 101', and told them to take bus out, then MRT, and then bus to the dinner spot.

Fortunately, again, when we told the group leaders the bad news, it was only 5.30 pm, so there was more than enough time for scrambling. And though some groups reached later than the projected 7.30 time (even after we changed time to accommodate for slower movement), at least all of them got to the end point, and I heard from R that they had a satisfactory time over there.

So for this camp, things I can be thankful for are:
1. That most of the program ran smoothly.
2. That even the major hiccups were quashed.
3. That the weather was really good the whole day.
4. That there were enough volunteers who came down.
5. For a comm that supported me all the way, even though quite a bit of the problems that were last minute were caused by me. haha.

So on the way out, I could afford to take a bit more of a breather, and I managed to get this shot: 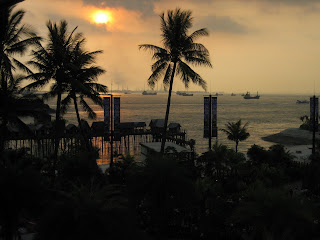 Which just about helps to remind us of God's sovereignty.

Oh and I finally remembered what I wanted to write about: Christmas Cards! Received some this year, some from expected people (including one via blogpost), some from unexpected people, but all gratefully accepted and cherished. haha. Yeah. Some are really nice, especially one that is like attached to a quadrilateral portion of processed wood pulp meant to help remove remains from around the main orifice wherein normal people put their daily sustenance.

Ok, enough nonsense for one night.

Cheerio
Posted by ArkAngel at 10:18 PM