By a rather fortunate coincidence, December in English is same as December in Latin, hence the 'English' title. I think it's cos it was imported from Latin. But that is just an aside point of absolutely no consequence to this post, apart from it being it's name.

December is almost over, rather quickly too I might add. Wasn't too long ago when I was complaining about having to study for JLPT (which was on the 2nd of December). So here's a rundown of what went on, and what's going on.

After NUS exams (ended 1st December) and JLPT, I was rather free. So first thing I did was to go and crash the Youth camp (Faithfool) that took place from 3rd~7th December. Brother was camp commandant, and must say he and his comm did a pretty good job, what with the rather short planning time they had. Lotsa pictures, lotsa videos, but I don't have them with me, since I only appeared every now and then. A few disturbances, but that's to be expected. Truly, God made a way for them, and blessed the lives of the youths who attended the camp.

Next major event was the Christmas in the Community. It was really cool. There was like publicity and stuff, and even though I wasn't quite as involved as last year, when I was drafted into the band as the bassist, I did help out a little bit... this time, it was to help Uncle H and E give out mikes during the performance. Was great. The Hokkien song done by Js was really funny and groovy, and some of the other performances by some residents of Woodlands was just awesome. The youth dance team from church also showed that all their hard work paid off. And about half the guys in the Youth Min fell in love with a certain young lady who sang accompaniment to her brother on stage.

Went for a spot of shopping with V on the 18th. To get Christmas stuff. Shopping is a tiring business. Shopping in a crowded place is even more tiring. But at least, I managed to find quite a bit of stuff that I could use. Ate some sort of glorified mee goreng for lunch at the basement of Takashimaya. Wasn't that great, though V said J like adored the stuff or something. I think the donuts were a lot better.

After that was the (at that point) eagerly awaited Telunas trip. Those that went the previous year wanted to get back again, and those that were first-timers wanted to see what was so great about the place. Some pictures below, some from me and others from F.

Must admit that it was pretty different from last round. Firstly, there were more people, but less of my kakis who were there. Secondly, it wasn't a completely relax camp, but there was some structured stuff. Thirdly, it wasn't quite as sunny as the previous time, and fourthly, P.J. gave us a healthy dose of his tekan on the third morning. 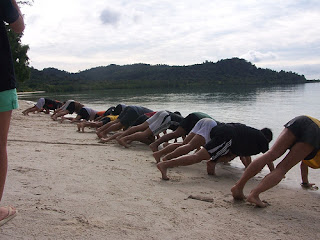 This here is the example of the tekan that P.J. gave to us. Doesn't seem too bad right? But this is after we had run about 2km (approximated by brother) in sand, along with numerous times we had to do push-ups and sit-ups. My fitness was totally shot through prior to this trip, and I almost died. If you look closely at the picture, you can see me. I think I should be that wimpy one who's leg is collapsing.

The scenery was still amazing despite the relative bad weather. Like this one, which was taken on the third day when the sun finally decided to come out: 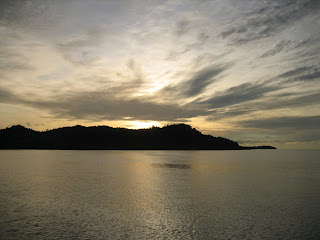 This was on the first day. One of the few nice non-sunny pictures I have: 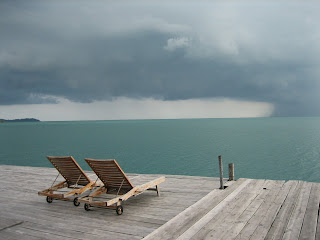 Strangely enough, if you turned 90 degrees to the right, you would have seen this: 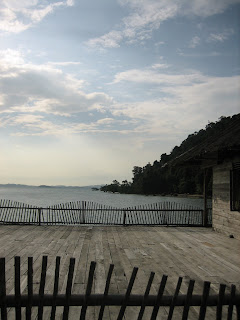 And finally, I must admit that ever since I started watching Miyazaki films, I have started to appreciate clouds more and more: 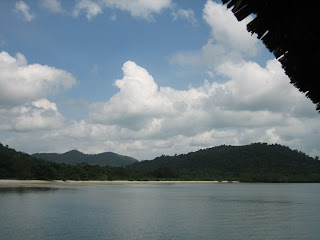 For other pictures, please take a peek at Farand's photo link.

After getting back on the 22nd, had to start doing both PRC camp planning, and writing Christmas cards for important people. Good thing I started earlier on both, but the PRC camp thing may run into some snags. It's like in a couple days time, and we're not fully ready. Managed to finish most of the cards for my CG people by the morning of the 25th though.

Sister got baptized on the 23rd. Woots! It may not have any sort of 'spiritual impact', since it is merely an ordinance, not like a charm or whatever, but it is still something the Lord called us to do, and is a public declaration of our faith.

Had had a mum-side family gathering on the evening of the eve, had lots of food and stuff. Oh and cousin MW is going to OCS. Haha... the poor sod's over there already...

Then it was Christmas! Went for Christmas service in the morning, so full that some of us ended up standing. Scrambled to write a few more cards before the whole thing ended. Then went for lunch at Uncle KC's. As always, he went all the way with food this time. After that, I toddled off to J-8 to go say hi to YL, then went down to town to join many others having an outing

So now all that is over already. Many nice pictures, much nice food, and many friendships renewed. But now is PRC camp planning time, and I'll just need to trust God to work His miracles, because darned if I'm able to do anything.

So yeah, pray for PRC camp, hope that the planning goes ok, and ask that I can recover from an irritating sore throat in time. I probably got it from S at the camp lor. Oh, and I cut my toe on a barnacle. Those devious little creatures are like the most evil things in the oceans of Telunas. (The bugs are also just as bad). Bled pretty bad, but good thing Auntie S was on site to apply first aid.

OK, that's about all I've got. Kinda losing coherence again, maybe write more stuff on Telunas next time. Must remember to talk about the stargazing incident. haha.

Cheerio
Posted by ArkAngel at 11:46 PM