Today, when I met J to do up the trip report, I just started wondering what I had been doing exactly a week ago. It seems so strange and far away, when I think about it, because last Wednesday was when I ran all over Tokyo to do my own last minute shopping. It was only last week, yet it seems like a whole world away. Which is somewhat odd, considering how I mentioned in previous posts (I think the depressed one) about how I felt that three weeks seemed really short and easy to remember what had gone on then.

So anyway, here's what I did by myself for the last few days I was in Japan.

On Monday, like I mentioned, I was depressed in the morning. So after I got back from the bus stop, I had to blog about it, hence the sadness in the post. I then managed to fall asleep for a couple of hours (since I had only slept an hour and a half that night) before waking up just in time to catch the train to Kotesashi for E-crew at Waseda Tokorozawa.

So I managed to get on to the Waseda bus on time, even though the way I got on would be reminiscent of the second time the team went for E-crew (read: I was rushing on to the bus) and met SW, sitting in his favorite seat in the last row.

Got down to the canteen there on time, but this time C wasn't there yet. So I took this shot: 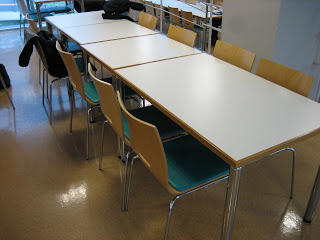 This really reminded me of Empty Chairs at Empty Tables. Remember, I was in a depressed mood, even though I didn't show it. And it only reminded me of the title. I don't think "Now my friends are dead and gone" is accurate.
E-crew felt really different without the team around. A whole lot quieter, everything was toned down a bit. And it didn't help that that particular day was a busy day, so only C, as well as (my look-alike) W were there. But it was nice to meet them both again.

Went back after that, and was contemplating going out to do some of the shopping, but I felt so sleepy that I ended up sleeping most of the time, and ate dinner from what I could find in the house, which for Monday night, consisted of half a can of Pringles, two packets of Pocky, and two fried fish that M had left in the fridge from the morning. Decided not to go to sleep in the room, so I slept on the sofa, like how I had been doing all day. It would prove to be a continual sleeping spot for me for the rest of my stay in Japan. 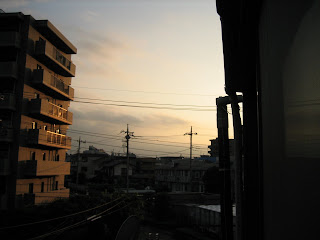 Took this shot in the evening of Monday. I wasn't quite so depressed as before, but this sort of sad shot sort of catches the mood. It was an Orange Time.
Tuesday woke up as per normal, did some QT, then proceeded to wash the rest of the bed sheets and stuff, and cleared out the tatami room, and cleaned up the place a bit. While clearing out the tatami room, I noticed a charger stuck to the wall socket. Now initially, I thought it was the Au charger, since I didn't know where that charger had been since first week, so we hadn't used that phone. On closer examination, however, I realized that charging jack was like no phone charger I had ever seen. And on even closer examination, I saw the "Nintendo" on it. And so I knew that it had to be that someone (who's name starts with W) had left it behind.

Went out to Mr. Donut to meet DL and Y for Bible study again at 3. Then after Y left, DL and me chilled out for a bit at the Mr. Donut (no donuts, only coffee. Strangely enough, I think the last time I ate donuts on that particular trip was when we went to Costco and everyone bought Lil' Donuts), then I bought my bus ticket. And when DL heard what I ate for dinner the night before, he and J invited me over for dinner at their place, as they had gone to Costco (wow. What's with the Costco connection) and had just come into ownership of food, so they could afford to have me over for dinner. Spent the evening watching Brave Story (not too bad a show) and chatting with them.

Wednesday, as mentioned, was when I did all my shopping. Morning was QT again, then I left at about 1130 to go out. First stop was the Christian bookstore at Shinjuku where I managed to spend quite a bit. Didn't go by Yamanote, took the Seibu-Shinjuku instead, and walked from Seibu-Shinjuku station over to Shinjuku. Not too bad.

After that I took the Yamanote all the way out to Ueno. Because it was at such an odd time, the train was really quite empty. 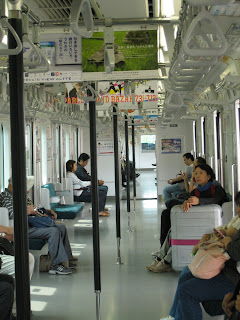 So empty I could've gotten a seat if I wanted to.
Bought some stuff at the anime shop again, then walked up and down Ameyayokocho trying to find a particular t-shirt for brother, but I just couldn't find it. Such a bother. Then was preparing to go to Ikebukuro, when I realized that Akihabara was just a stop away. One of my friends said she found a certain pair of ear pieces very nice, and I didn't know where else to go, so I took a short hop out to Akihabara, bought the earphones, and then went to Ikebukuro, where I did even more shopping in Sunshine City and Loft. Went back to Tokorozawa after that, met C for a bit, then ate dinner (a proper one at Matsuya) before toddling off to D&J's house to pass them some stuff and to chat a bit more.

Thursday morning was more cleaning. And packing. I started to feel worried that I wouldn't have been able to pack all my stuff into my bags, cos there was really quite a bit of stuff. But up till that point in time, I was able to stuff most of it in, so yeah. But I knew I had to stop buying stuff soon. Went to Shin-Sayama to help HJ do some furniture moving for her counselling place. It was like some dude's house, and it's really cool. It's a two-storey building, but with two separate houses inside. The bottom floor is where his mum lives. He lives with his family on the top. And there's no real master bedroom. He has a loft. Like I would have taken a picture, just that it's not nice to take pictures of people's rooms like that. I want to have a loft in my own house next time. As if. HDB flats aren't exactly very accommodating when it comes to wanting to have a loft.

The weather was like Singapore weather then. Warm, just not quite so humid. But yes. It was starting to get hot.

Went back home for a while first, then went to Takadanobaba to meet AM for dinner. Met him long ago in church, but only really got to know him from the 2006 JMT, and he's at Waseda Uni on exchange. Had quite a good time just talking and eating around Ikebukuro.

Got home around 10, hoping D&J would be able to make it for supper like they said they would, but they were both feeling out of sorts that day, so D called to say they couldn't come over. A bit sad, since I wouldn't see them again there. Did all my last minute packing, and managed to stuff everything into my luggage. It still weighed a ton though. Caught one and a half hours of sleep (just like on Monday), then ran to catch the Seibu bus. 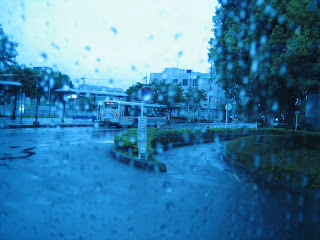 Why does it always rain on me
The trip to the airport was uneventful. Wanted to see if I could take any nice pictures, but I just sorta fell asleep (it's due to lack of sleep) and woke up at Narita. Did quite a bit of shopping there, especially for some chocolate biscuit that brother (and later I found out, V) really liked and wanted.

The plane ride back was pretty ok too. First meal, from Tokyo to HK, was decent. It was some sort of pasta with meatballs. But the best part was that I got this for dessert: 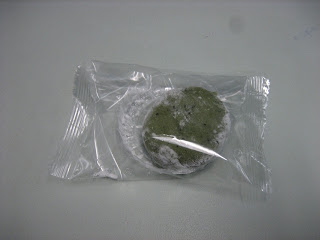 It's a mochi! It's really nice to eat. Sorry to hear that you didn't get any on your flight J!
The other meal, from HK to Singapore, wasn't that great. I didn't want to eat pasta again, and since J wasn't around, I thought I could eat pork. Tasted pretty bad though. Really salty. Good thing there was other food there to help get rid of the taste.

Got back to Singapore at about 8pm local time. Was really surprised (and touched) when I got through the gate and saw my team and V, along with my parents. Wasn't expecting it, since there was JPM on that night, and I had told them to go for the prayer meeting. Still, it was nice to see them at the airport. Was torn between going with them for dinner and going home, but went home in the end because parents wanted to go home, and V had to go meet her mum and so we gave her a lift.

Final installment for the JMT was as mentioned, today, where I met J at Ang Mo Kio Hub for lunch and then wrote out the report. Going through the itinerary, remembering all that we did, and typing it out, as well as remembering all that we did, and not typing it out cos it's within the team only, was quite a nice experience. But that's about it for JMT 2008. Maybe have to do a presentation, but if not, this is officially the end of JMT 08.

haha.. sorry bro. thot you weren't back yet so didn't ask at all. .sorry sorry.. haha.. nvm, i foresee the next time to be pretty soon! =)

Y thanks you for the bible cover, DW. It was too big for his OT bible though, so he puts his NT & OT together into the cover... kinda fits better that way.