Ok, the original plan for the mission trip was to write every few days about what happened about the past few days. That kinda failed, because of the busyness. So, I thought, as long as I could keep a chronological log of all that we've done, that should be fine too.

Well, that's about to fail, because the departure of the team has left me so incredibly depressed that I need to blog about it.

Yes, I know usually I don't show my feelings, and come off as a cold-blooded, emotionless person, but I do have feelings, and yes, I feel sad and lonely now. I almost felt like crying just now. Except that I had slept at about 4.15 and woken up at 5.00 and so I was feeling kinda numb, so I didn't feel sad enough to cry. But I shall explain a bit more lah.

When R left a week ago, I could feel the tug already. I mean, he's a decent guy, and he was living with us for 2 weeks, after being part of the team for 6 months. So on the Saturday morning when he left, and D and me had gone to send him off, I felt a bit sorry to see him go. It was out of necessity, of course. He had exams the following week, and I am really grateful that he was willing to come out on a mission trip just before his papers. But yes, there was a tinge of sadness as the Seibu bus pulled out of the station area.

Still, it wasn't too bad, mainly because the rest of the team was still around, and M was flying in that night. I mean, you know, when you've got something else to look forward to, to know that there are still some people around to be with you, it doesn't feel so bad. 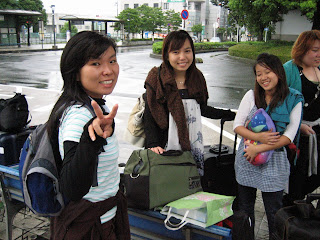 The team about to leave
This time, it was slightly different. The day before wasn't very hectic. They stayed up through the night to pack their stuff, of course, but it was still very relaxed. We all snoozed for a bit, then rushed out, because I thought they might be late, and really made them run, but we got to the bus stop on time. So we said a short prayer for the team, then the luggage was loaded up and they got onto the bus. And then the bus pulled out of the station.

Now, it was bad enough as it was already over here, since my mind was becoming more coherent, so I was starting to remember all the fun times we had (starting with Costco, I don't know why, and then Odaiba). Then as we (D&J and me) started to walk off, D&J were discussing where to go for breakfast, and they decided on Macs, and I said I didn't want to, then D turned to me, and said, "Well, ok then, I'll see you tomorrow at 3 at Mister Donut. Meeting M for Bible Study", and that was when it hit me.

You see, up till that point in time, almost everyday (except for the week of the OMF conference), the team had been meeting either D or J, if not both of them together, for ministry work, or at the very least, for briefing/debriefing. When D told that to me, it really struck me that this was it. The mission trip was over. It was like an end of an era (ok ok, give me a break. I know era is pushing it, but I'm depressed), and yeah. It was finished. And that made me incredibly sad. So sad that I almost started blubbing on the street between Tokorozawa Station's East Exit and Kusunoki Hall.

That is why I am now typing out this post on my laptop, even though I haven't talked about what we had done for the past two weeks. 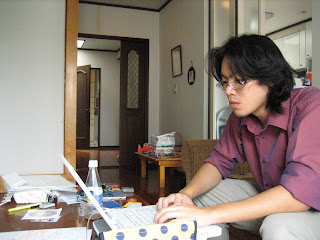 Me typing sadly on my laptop. Ya, ok I know, I don't look sad. That's just me being cold-blooded and emotionless
So to my team, even though you all left Tokorozawa only an hour and a half ago, I miss you guys already. Even though we had some tension moments, and some issues that we didn't quite agree with, you can't stay 3 weeks with friends without feeling the pain of them leaving. Especially when you're left at home in a big house.

And so now, as I look back on the past three weeks, I remember all the little quirks of the six other members, and all the random things we did together in the house. I already miss singing Veggie Tales songs with R, but there are so many other things that we all did, that makes me remember them. Like peer over W's shoulder as she types out a blog post, or hearing the sounds of Queen and Coldplay from the iMac because D was watching Youtube. To see L counting the day's expenditure and moaning the fact that she had too many coins, or see M either devouring the comic collection here or writing her own. And of course, I'll really miss J, I guess because she was my assistant leader, and I'll miss watching Lost 3 with her, or hearing her attempt to plink out As The Deer on the keyboard.

And I'll remember when we went to Costco, which marked the start of the trip, and remember all the great things we did together, whether ministry or frivolous. There are so many memories, and I'm happy to note that there were more happy memories than sad ones on the trip.

It's almost 8 in the morning now. At any point in the past three weeks, I would be have been up for about 15 minutes already, D, would probably be pottering around in the kitchen, and maybe J would have just woken up and gone to shower.

Oh bother it all, I'm almost making myself cry.

And in this depression, I don't know, I'm just reminded of what J did during the first kids' club. She was sick, and so in order not to pose a risk to the children, I told her she had to sit out. Now, for those of you who know her, you know she really loves working with kids. Furthermore, she was the one who had done most of the planning and preparation for the kids' club events. So asking her to sit out was quite a blow to her, since she had really been looking forward to this.

Yet, instead of choosing to mope about and cry, or kick up a fuss, she chose to use that time wisely, to use it to spend time with God in solitude, to find out His plan for her, both for the trip and for her life, and to pray that we would be able to have a good time with the kids at the event.

This solitude was not self-imposed. It was forced on her because of circumstance. I however, have chosen to be in this situation, and I had forgotten this lesson that my assistant leader taught all of us. And almost as if in confirmation, A also told me I should have a mini-retreat of sorts. I have this opportunity to spend time with God, and that's what I should be doing. So if you'll excuse me, I'll need to go and spend some quality time with the one person who has never let me down or abandoned me.

And as for my depression and the team, I'll just pray that we'll all get back to Singapore safely, and then we can meet again. 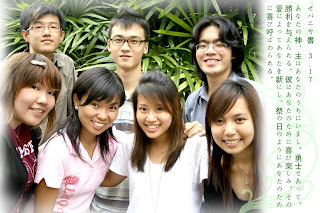 The team
Posted by ArkAngel at 5:59 AM

wow. we do NOT think youre a cold-blooded, emotionless monster! haha! you can't be a monster if you sing veggietales songs! hahaha (: veggietales rocks ((: