Once again, I just had to leave it till the end of the month in order to post to save the at-least-once-a-month record. Hard to imagine that the last time I posted was almost a month ago. Seems so much less.

The past month has been really kinda busy. In a way. I have now got a new-found respect for the people in the newsroom who cover school sports. Mainly because I had to do a bit of it, and there's really very little to show for the amount of work that you do. So if you ever go to the Straits Times Online and see all those scores for school sports, appreciate it, because the journalists who handle it have to call many different people to get information, and are usually swamped with the amount of data they do get after that.

I guess the most blog-able thing I have got today is that I left my job. Not because of school sports. I actually didn't mind it. But my contract ends today, and I chose not to renew it.

Even though it was such a short time, and I wouldn't exactly call myself close to my colleagues, it's still kinda hard to leave. For the past half a year, I've been going in every morning at about 10.55, dropping my bag, sitting in my chair, and logging onto my computer. And the process is always the same: Log into computer, log onto Lotus Notes, log onto Hermes, and then open up the Unisys Explorer, and then the Unisys Newsroom. Then start up Firefox (used to be IE, but then realized there was Mozilla in the comp), scan CNN, and then go to Yahoo Sports' NBA page. 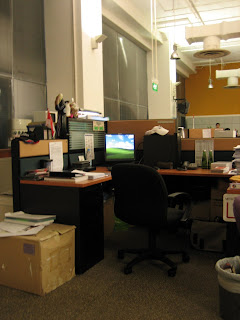 My workstation
The routine is so...routine, and I guess I'm quite comfortable with that. I'm not so comfortable with other parts of the job, like you know, talking to strangers, but generally, I think I really enjoyed my time at SPH.

When I started to pack up today, it seemed like only a few days ago, I was moving my stuff into the workstation.

Oh, one curious thing is that the first few days I was in, time seemed to crawl. And then after the F1 weekend, it suddenly sped up. And now, just as I'm leaving, it's crawling again.

So anyway, today, I said bye to the people I met, from the pix desk, from CCAB, from the PR companies, and even two friends I met from my first day during the training session.

And of course, I wrote a short farewell note on Lotus to the good people at ST Sports desk, who have had to keep an eye on me and make sure I don't make them look like the New Paper.

Naturally, it was a bit sad, but the good thing is that unlike in army, I can get in a lot easier. And I will probably take advantage of this feature, even though the sports desk told me not to return without food. 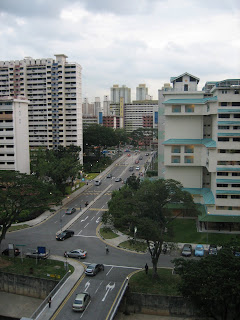 View from the roof, near the cafeteria
So it was a great experience being there. Now I'll just need to go off and do some other things first.

P.S. I'm so used to writing the articles that after finishing typing this post, I started to look for the 'Spell Checker' tab. Looks like I'll have to use manual version for a while.
Posted by ArkAngel at 11:23 PM