Was talking to my friend A last night, and he remarked that I hadn't blogged for a long while. The reason I gave him was that when you're doing a job that requires you to write articles, you kind of lose interest in blogging, mainly because you are forced to use your literary energy to write those, so there's less for blogging.

But since I had a long break over CNY, and I don't want to miss out another month like I did last year, I shall now write an article so that I won't miss Jan 2009. And it shall be a reflection on 2008, which had several major happenings which I shall try to recall.

Let us start with going to Phuket for a trip in March (I think). What makes this trip so special, is that this is one of the few times I really cut class to go for it. I mean, I have skipped some lessons before, but it was always like one lecture, and my parents don't know about it. This time, I went for a week, and my parents knew about it, but they did not kick up a fuss. I mean, they would have (trust me, even though I am 24, they would kick up a fuss if they know I cut class), but I was going to do a job. Sort of. So it was all cool.

I also graduated. I remember meeting up with H (since she was the only history major from VCF who attended) and going up to receive my certificate, and also remember Prof L giving me a slight smile (he's a really cool guy. He taught me in HY 1001E and also for History of Christianity. Plus, he speaks like 15 different languages or something). I also realize I didn't post up anything on that. 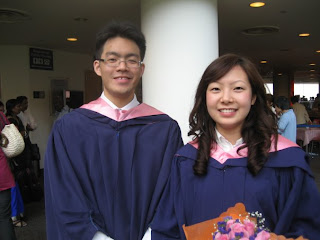 H and me. Sole VCF history representatives.
While it was nice to graduate from uni and all that, somehow, the graduation ceremony didn't feel quite as good as commissioning parade at OCS. Even though it was a rain out then. I guess there are different values in a way. While the degree will be my ticket to jobs and all that, I felt like I really had to earn my commission, so maybe that's why I felt a greater sense of accomplishment on the parade square at OCS. Plus, my mortar board was a bit too small. Bummer.

Next big thing was that I found a job, working at Singapore Press Holdings. It's quite an interesting job, and I quite like it. Plus, it has forced me to become a bit more active and outgoing, since the nature of the job requires me to be like that. Still need to work on that though. I always feel so paiseh to talk to people. Still, it has been quite fun. Started on the 1st of Sept, and have met quite a few friends there, both inside and outside office. The colleagues are also really good people. A couple of church people also found jobs at SPH recently, and once, the two of them robbed me of my candy. Even though they asked politely.

Guess the biggest event that happened was that my Gramps passed away. He had been deteriorating for a while now, and in early November, he was admitted to hospital. After a few days, he was discharged, but less than a month later, he was re-admitted, and he went to be with God on the 4th of Dec. There are quite a few things I shall remember about him, but the three that stuck most with me (which I told myself I had to post) during his last few days, are here.
I have one last point regarding the past year. I only cut my hair once in 2008. First time such a thing has happened. It was in July I think, just before I started applying for a job, as I don't think I would have made a good impression with long hair in an interview. Plus J told me I look better with short hair anyway.

So now, this year, I have got several other things to look forward to, to plan for and to prepare. I already have one big move that I hope to be able to make, but guess I'll just have to see how things work out from here. And trust God to guide me and do the rest.

you really DO have a gift for writing.. =) all the best in the coming year.. may He continue to bless you richly..

Were you hinting at me regarding the hist vcf grads? haha =p Anyways good to reflect on the year past (when my grandma died the dec before before, it was pretty similar to what happened with your Gramps - at the end of the day we know that God is sovereign), have fun at work and all and catch ya around one day :)