So I've put this off long enough as it is... Doesn't help that I don't have internet access at where my place. Thanks to Uncle L who allows me to use his place for internet for the time being.

Anyway, the good thing about going out when I went out was that the cheapest air ticket in the 1-year category was with SIA. And they use the Airbus A380 to travel between Singapore and Tokyo. And it's really spacious. 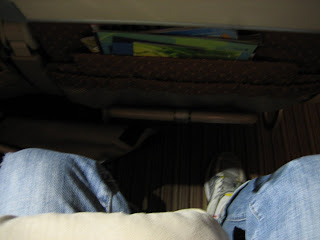 So much leg room...
Here's another shot of the plane aisles. Not sure why, but it seemed a bit bigger than normal plane aisles. 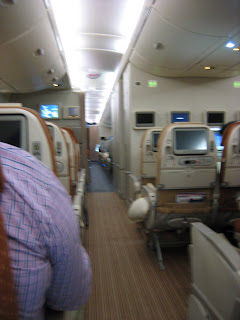 No, I wasn't trying to get a photo of the air stewardess...
The chairs were comfortable, and there were quite a lot of movies there, even though they didn't have Star Trek like I was hoping for. I had intended to sleep though, so in the end, the only channel I kept the screen at was the one with the flight data.

Food was pretty good too. I mean, I think it's as good as airplane food can get. Here's the breakfast I ate. It was a cheese omelet with hash browns: 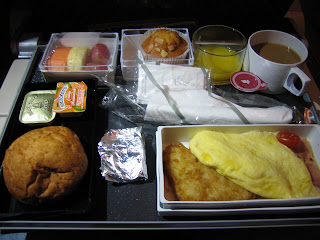 Breakfast!
I didn't quite expect them to stick to the description in the menu though. "Cheese Omelette with ham steak, roasted tomato and hash brown". No kidding, they really gave me one cherry tomato. Not that I really wanted to eat tomato or anything, but I was kinda expecting it to be like a halved-full-size tomato.

They served it rather early, at about 5 in the morning Singapore time, but it didn't affect my sleep, since I had trouble sleeping on the plane all night. I'm not sure why, maybe because I stat cursed myself when talking with Fr at the airport, about my ability to sleep on the plane compared to his inability to do anything other than cower in fear in an aircraft.

However, on the bus to Tokorozawa, I did manage to catch a short nap. Though I kept on getting that pre-neck strain feeling, so I had to move my head about a bit.

Finally reached Tokorozawa, and was supposed to meet Uncle L at the station, but I didn't see him, so I started walking by myself over to his place. And he introduced me to my new house, as well as to my room-mate for one month, JP, who's a dancer from Brazil who lives in Northern Ireland. Which sort of makes us similar, since we both live in places we were'nt born in.

Anyway, it's great that I get a roomie so early cos it helps me deal with an feelings of loneliness.. It is kinda hard to feel lonely when you have a cheery 6-foot Brazilian living in the same apartment as you. And his life is also a great inspiration and encouragement for me, in his vision for Japan, his plans for his life (he'll be doing full-time with OMF in October), and his love for God.

Ok, I'm about done for the time being. Just wanted to end of with a big thank you to all those who sent me off at the airport. Even though I felt kinda paiseh because there were so many of you, I'm really glad to have been able to meet you all there. I was really touched by your care and concern, even if I didn't show it, since according to PI, I'm rather "cold and aloof". But that's just me being 'emotionless'. Or as F puts it, being the 'Freezer of the church office'. Ha. 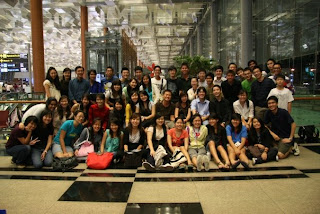 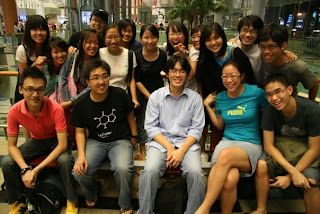 The VCF group.. though you can't really see MS. 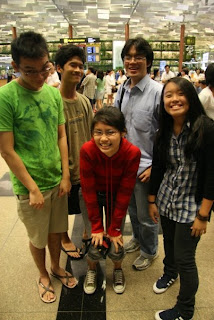 The family. Though I must admit we do have some rather weird people inside... *cough* guy in green shirt *cough* 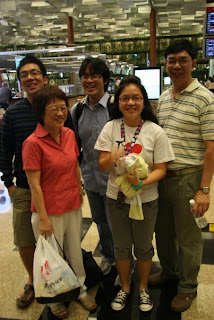 Hey Dan, good to hear you arrived safely and now have a (seemingly nice) roommate! XD

hey bro, really good to hear you're doing fine. that's a heck of a breakfast u got on the plane there.. =) keep us updated with what's going on there ya? God Bless! =)