How quickly time flies by. Can't imagine it was a week ago that I last blogged. Have been meaning to, but just have not been able to get the chance to do it.

Anyway, after a week or so, I've more or less settled in to my place. Have got most of what I need to survive, though along the way I do notice things that I need to purchase when I get the chance... The latest things I bought were a small frying pan for frying eggs (it's the only thing I can cook, but the other pan was way too big), a squirt bottle for ironing, and a pair of long chopsticks for doing instant ramen (ok, so I can make instant noodles too).

I try to do laundry on my free days (or when I run out of socks), which at the moment is either on Monday (real free day) or Thursday (originally for language class but had to leave so temporarily free). Friday is my only language class day at the moment, and even though I've forgotten most of my Japanese, the volunteer sensei at the class (it's only ¥100 for 1 and a half hours!) seems rather pleased that I'm relatively easy to teach, since I have some background.

So today I went for language class, but after that I went with Uncle Louis to visit Shiraishi-san in the hospital. He's a slightly older guy who's retired, but apparently, was pretty well known as he had gone on TV before as like a host for fishing shows or something. Here's a picture of him and his wife: 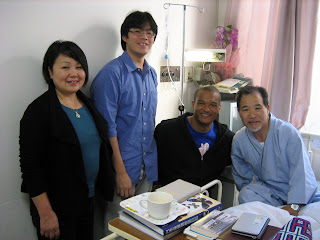 (L-R): Mrs Shiraishi, me, JP, and Mr Shiraishi
He was in hospital because he had a stomach ulcer, and when I visited him last week with Uncle Louis, he was still on a protein drip, which I figure is not all that fun because first off, there's a needle stuck in your arm, and second, you don't get to eat food. Still, despite being in hospital and having that needle in his arm, he was a pretty sprightly old dude. Oh and he speaks English really well. He seemed pretty happy to have guests, but I guess that's also because the hospital isn't exactly the most interesting place, and the needle is in his arm.

Anyway, Uncle Louis visits him every week to do some Bible Study with him, and so far it seems like it's pretty good. Last week, Louis used the passage which he was preaching a sermon from, and this week, Louis asked him to share about something he read during QT.

One more interesting thing about Mr Shiraishi is that his hobby is in catching butterflies. Yeah, I know right, how often do you meet people who have such cool hobbies? After he fully recovers, he intends to got to Kyrgyzia to travel about with a group of fellow enthusiasts in the mountains to catch butterflies, though the doctors are cautioning him about it.

So please pray for him as he continues to recuperate from the ulcer, and that he'll be able to get the chance to go and see his butterflies in central Asia. 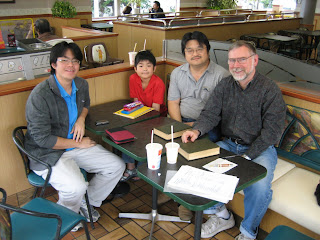 (L-R): Me, Ken, Rekiji and Steve (in case you didn't realize)
Rekiji is a relatively different case from others, since as Steve says, Rekiji approached him for Bible study, and this is the first time that Steve has been able to do discipleship with a Japanese man one-to-one. Usually, in Japan, it's the women who are more receptive, while the men don't really care. Please also pray for Rekiji, that God will reward his interest, for Steve that he will have wisdom in leading, and for Ken, that he will understand what is going on during class.

Usually on Tuesdays and Wednesdays, we go to Waseda University to do work with Yoshitaka and his group of people, who are from a nearby church. This past Wednesday, I was paired up with this guy called Yasutomo, who took leave that day to see what his fiancee was doing, and God allowed us to meet Mari-chan.

So anyway, Yasutomo started to talk with her, using the survey form we had, and I tried to keep up. A bit difficult since my Japanese is not good, but the conversation went pretty ok. And the good thing of course, was that she was a rather bubbly person, so she was willing to talk with us.

Initally, we were supposed to do this survey/conversation thing with students for about 1/2 an hour, but we ended up chatting for about 1 1/2 hours, and Yasutomo shared with her some about Jesus and His love for us. And the Holy Spirit definitely was with us, because she did listen to us talk, and after that, continued to talk with us about religion stuff (I think) and things in her life (I think).

At any rate, after a while, Yasutomo realized that he was pretty much incapable of continuing to talk with Mari-chan, because I think it had reached the stage where girls feel more comfortable talking to other girls, rather than two strange guys, one of whom barely understands Japanese, so he asked his fiancee, Mai-chan, over and the two girls hit it off really well. And at the end, of the long conversation (we started at about 1:35 and it was already almost 4:00), Mai-chan prayed for Mari-chan.

So also, please pray for Mari-chan, that this encounter with the people from the church, and hearing about God, will be the beginning of her walk with God, and that she will also come to know His love for her.

Would post up a photo, except I don't have one. Would've been wierd anyway, to ask to take a photo with her.

So to recap:
Will blog a bit more, but I think I've put up quite a bit of information already, so think I shall stop here.

Cheerio!
Posted by ArkAngel at 6:08 PM

What does Shiraishi-san do with the butterflies after he catches them?

He squeezes them in the middle, and then preserves them I think.