Went out in the evening to pick up something important for dinner.

Though I'm not even officially from the country, there are still some traditions that I feel, need to be kept.

In fact, it's not even about the nationwide celebrations, so much as this is one of the few times I know when everyone in my family makes it a point to be home (this year, it couldn't happen). And while it may not seem like much, it is symbolic, in a way, of what we do every year (except for one year when we had to settle for inferior goods).

Two stations out isn't really that far to go anyway, compared with some places I have been to in the past few days.

I guess, the thing I'll miss most, apart from the family time, would be that I will be unable to join the LAN sessions/Xbox sessions/Wii sessions that will undoubtedly take place tomorrow. 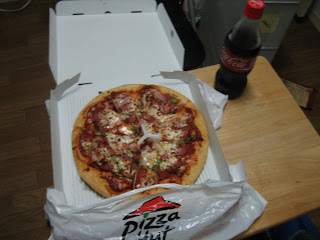 P.S. ->Jo: No, we didn't sing National Day songs (you all sang it two months early last year anyway), and there are probably some parties but since I'm not Singaporean... Karen did mention that one Singaporean restaurant was offering 44% discounts to people who could show their pink ICs.. How very Singaporean...

P.P.S. Ooh there was a major quake off the coast of Japan, registering 6.9 (or 7.1, depending on sources) on the Richter scale. I could feel it!! The ground was moving!
Posted by ArkAngel at 8:00 PM