So yes, I know it's almost a week since I went down to Yokohama. But I was busy. Sort of.

Anyway, before I had the chance to go on a bit of sightseeing in Kanagawa prefecture last Friday, I went up to Ibaraki for the monthly "Support Ibaraki Housechurch" journey, though since Louis has gone back to Singapore, this time was with Yoshitaka and Kodaira-san.

Generally speaking, the trip was rather uneventful. It was the first time that Yoshitaka had gone up though, and I made the same remarks to him about how the place reminded me of Miyazaki anime, so he told Shirai-san (the lady in charge of the housechurch) that she could name the housechurch the "Totoro HC".

I bought some candy bars to eat in case we got sleepy (specifically for the driver [Yoshitaka] if he got sleepy), and put it in the car. On the way back, when he started to get drowsy, he asked me to help him get some eats out, whereupon I discovered that not one, but both packets of chocolate had become squishy.

I was somewhat surprised, since the day itself wasn't terribly hot. But then we both realized it was because I had left it at a spot in the car where the engine heat was getting to it. (Don't look at me like that. It's where people usually keep candy in the car. Between the two front seats!) Which of course, naturally resulted in this: 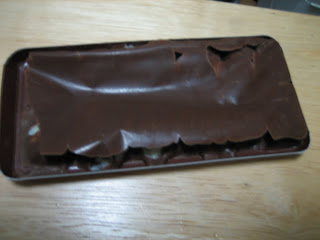 After refridgration, of course.
So anyway, back to talking about Yokohama. I woke up late and left home later, it was close to 12 noon by the time I got out of my house. I was considering going on another day, but then I felt that I had been cooped up at home for too long already (due to my overspending last month and the need to save money), so I toddled off to the station.

It was rather cloudy when I left Tokorozawa, and as I was heading to Ikebukuro, it seemed to get darker, which to me, was a bit of a bummer. It didn't look like it would rain, but when you go to a nice port city like Yokohama, especially if you want to see the sea and stuff, generally, you prefer to have sunny skies.

Fortunately, as I traveled further southwest, the weather got better and better. And I started to feel all sunny and excited inside as the train continued rolling along. I'm not sure why. Guess part of it was having been cooped up so long, and part of it was that it was sunny (the weather had been cloudy for close to two weeks already), and also part of it was that it felt like an adventure. Going to somewhere similar in Tokyo, like Odaiba, probably wouldn't have elicted the same emotions in me.

Following the recommendations of a guidebook I inherited from one of the Lau families, I did not stop at Yokohama, but went straight to Sakuragicho. Especially since I wanted to see the ocean. This is what growing up in a small island nation does to you. 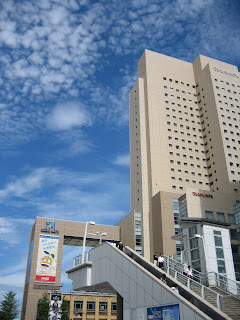 View after stepping out from Sakuragicho station. Pretty. Plus, I like clouds.
The place, of course, is really beautiful. I guess the clear blue skies and bright sunlight affected my judgement as well. As I mentioned, Tokyo had been kinda gray the past few days. And being surrounded by buildings all this while (when not surrounded by the four walls of my room) made me forget just how... liberating it was to stand in the middle of an open plaza. Even if it was beginning to get a little warm.

So I started my little tour of the place, roughly following the coastline. And of course, with two batteries fully charged, I started doing touristy things! 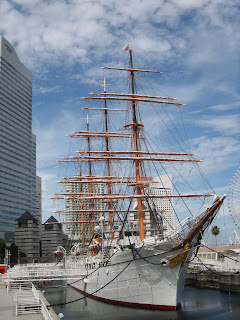 There's something appealing about sailing ships...
Being the stingy miser that I was, I didn't go on board this ship, though I did admire it from a distance, and through my camera lens. Generally, I made sure I went to places where I would not have to pay entrance fees. And there were enough there to occupy me for half a day, so no complaints. The specter of my overspending still hung over me. 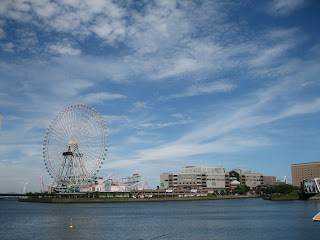 Pretty, oh so pretty...
Did I mention that the place was scenic? This pictures currently sits on my desktop. And it looks even better if it is like large. Like if it was on your desktop. The ferris-wheel-and-island also reminds me a lot of Odaiba, which is another place I enjoyed going to (haven't gone there yet this time). This is an artificial island, I think. There's a small amusement park, and a huge shopping mall. Didn't really explore the entire place, but one of the points of interest of the island are the old red-brick warehouses. 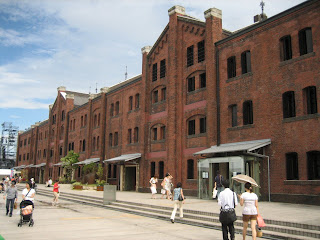 Looks European
They aren't used as warehouses any more, though they still stock lots of goods in the form of a shopping arcade. And a rather atas one at that. As you can probably guess, apart from admiring the place, I did not buy anything. 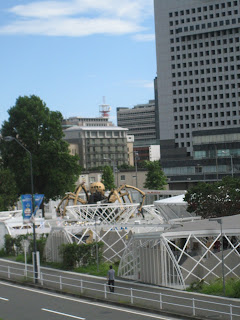 Spider!
Incidentally, this year is also the 150th anniversary of the founding of the city. So they have all sorts of fairs and attractions as part of the celebrations. One of the most iconic shows that is there is this giant mechanical spider. Think it was a rest period or something, so it wasn't moving. But I'm pretty sure you can find videos of it on youtube. Think I heard it was 15m high. 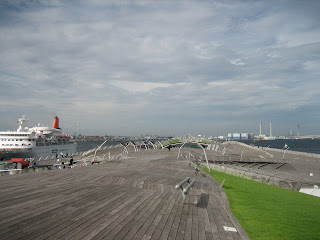 Reminds me of Singapore!
Next up was a visit to the roof of the International Passenger Terminal (Osanbashi). It kinda reminded me of Marina Barrage, with the large open air space, the grass on the roof, the view over the sea.. And you can get lots of good photo opps from here. 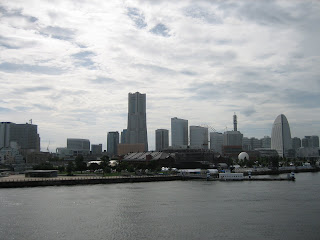 City skyline with waterfront... reminds me of Singapore too!
This was just one of the shots I got from the roof of the place. Admittedly, Singapore has many more skyscrapers, but I'm not the only one to think that there is a similarity. Yoshitaka thought so too. Maybe if I put up the nightshot I took... 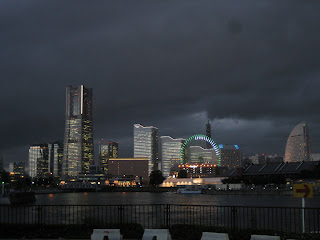 Reminds me of Singapore!
...here. There, this does look a bit more like Singapore right? Ok maybe not really. But well whatever. Incidentally, the tall building on the left is the Landmark Tower, and is one of the tallest buildings in Japan. You must remember that Japan is earthquake prone, so unlike Singapore, they have to take that into consideration. 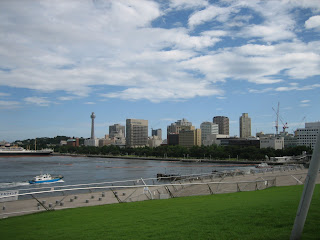 From the same place...
This is the other side of the terminal. The front part with all the trees is Yamashita Koen, which is good for taking night photos of the bay area, and famous as a lover's park. Many couples go there together, though it seemed like a normal park when I went walking through there. Maybe at night... 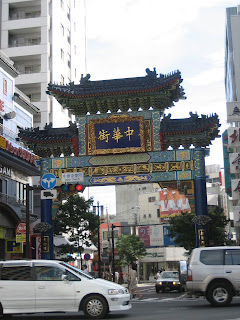 One of the five gates leading to the Chinatown
And of course, part of the reason I went to Yokohama was to visit the Chinatown. According to guidebooks, it's as old as the city itself, and is the largest Chinatown in Japan. It has a lot of history. Though I would be lying if I said I was going there for the history. As much as I enjoy history, I was really going there because they had char siew pau. 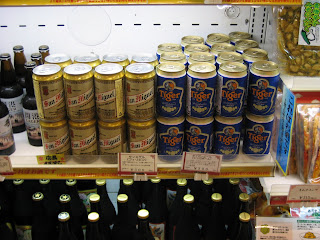 Reminds of Singa.. no this *is* from Singapore!!
I went wandering through the streets, and through several shops as well. There were quite a lot of food places too, serving Japanese style Chinese food. I must admit that although I was hoping to get nice Chinese food there, during dinner time, none of the shops appealed to me enough for me to go in. I did get my pau though \(^_^)/

So that's about it. I went back to the Osanbashi to take several nightshots, then went down to the Chinatown again for souvenirs before heading back home.

It was fun. Maybe funner with more friends but oh well.

Cheerio!
Posted by ArkAngel at 9:16 PM