So I've been back in Japan for just over a week, and I'm happy to note that I have not forgotten quite as much Japanese as I thought I had, which is quite funny, since the first week or so back, I just could not get the Japanese-ness I had picked up out of me.

At any rate, by the 2nd week I was in Singapore, I realized I had started to forget my Japanese, but on hindsight, I guess it was kinda like getting put into the storage area, instead of the common use area of my brain.

So the weather is ridiculously hot now. Still not the worse (I think that comes in August) but pretty close, and the humidity is pretty high too. Yeah, it's about 35 degrees about now, though it looks like s storm will be in for the whole of next week, which should cool things down a bit.

On the way in, there was one thing that I was really thankful for. See usually, when you take a flight, as the plane ascends or descends, pressure will build up in your ears. And you can usually alleviate the pressure by yawning or swallowing. Unfortunately for me, the past 4 or 5 flights I've taken, I've always had problems 'popping' my ears on the descent. Which usually leaves me with a dull pain in my ear for about half an hour after I disembark.

But this time round, I'm not sure why, but the pressure never got to build up fully. I guess I can thank God that this time round, He helped me through that little bit. (It might seem little, but it really irritates me when it happens).

I also went to a summer festival last Sunday at Hana-Koganei. While there, I managed to meet up with the Komai family (they live at Hana-Koganei) and talked to them for a bit. 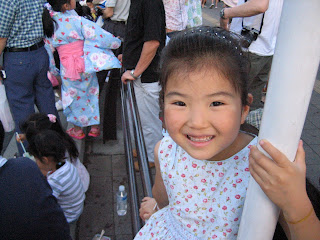 Miru Komai. Last I remembered, she didn't like taking pictures, but maybe that's cos the other person was using a DSLR and I was using a titchy little IXUS.
Couple of prayer pointers, in case you don't get access to MW from my church:
Ok that's about all I have for now. I really should get down to doing my assignments for my CMS course, but inertia is such a difficult thing to get over...