Being in Japan can get lonely at times... I have to live by myself, my family is 7000 km away, I can't easily call out my friends to go play CoH, or do many things that I would otherwise be able to do at home in Singapore. 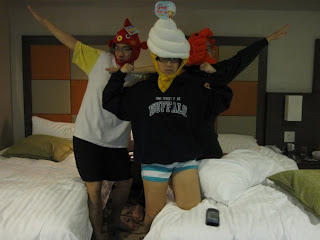 Super Sentai Team: Not really possible right now.
However, being in Japan also affords its own perks. For example, I can get Japanese food at relatively cheap prices. I can also find lots of Japanese anime music which I either 1) will not be able to find in Singapore, or 2) cost $70 for a 5 track CD in Singapore.

And I am also able to pick up various things that may interest me, like martial arts.

See, as a kid, my dad didn't want me to take up karate or judo or taekwondo because he was worried that such martial arts training would lead me to grow up to become a horrible, violent, sociopath. His fears were pretty much unfounded; I have grown up to be a horrible, violent sociopath even without the martial arts training. But now that I am in Japan, I thought it would be nice if I could just go and try out some Japanese martial arts that I may not have the chance to do in Singapore.

One of the classes I picked up was the naginata. I started this earlier this year, and the net result of that is that I am now having to teach two 5-year-olds English. I will explain this some other time, since I want to post about naginata as well, but that's not what I want to focus on.

Then recently, I got the chance to try out Japanese archery. I've always thought the kyudo practitioners were really cool in the way they went through all the stylized actions of shooting. And as there was a beginners' course being taught by the local kyudo association, I thought I should join in just for fun. 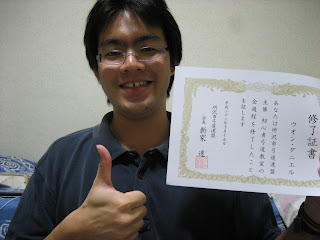 I would post a picture of how cool kyudo looks, but since I wasn't able to take any photos then, this photo of me being happy with my beginner's certificate will have to suffice.
One of the interesting things about kyudo, as I read up on wikipedia, is the whole objective of the sport/art. In western archery, or most shooting sports with targets, the aim (pardon the horrible pun) of the whole exercise is to put your shot as close to the center of the target as you possibly can. And naturally, in kyudo, the closer the arrow is to the center of the target, the better.

The big difference is that that is not the main aim. The main objective of kyudo is to be able to have the correct form and actions, and the correct attitude in shooting. Which is really almost quite zen in its explanation, but it boils down to this: if your form and attitude is right, then the arrow will hit the target. But even if it doesn't, you've still managed to attain your objective. Conversely, if you hit the target, but don't do things correctly, then you've pretty much failed at it. You can go read up more on wikipedia if you're interested.

And I was thinking how this could easily be an analogy for many other things we do in life, where we have a target or objective that seems to be the main aim, but is meant to act more as a guidepost to getting the real lesson. (*Koff* studies *koff*)

And in life, we (generally) aim to be a 'good' person, and I'm thinking, being a 'good' person is a nice ideal, but that would be more like the target in kyudo. The main aim in life should be to become the person God wants us to be. And like an arrow that is shot when the archer's actions and attitude are correct, if we are able to find out what God wants us to be, we'll naturally be able to be a good person in life.
Posted by ArkAngel at 10:50 PM

the way u draw the analogy is neat.