Today I went to 'teach' English to the two 5-year-olds that I got to know through my naginata instructor. I use 'teach' because as always, I'm not really sure if I am really helping them develop their English. In fact, today's lesson was almost half science, since I was talking about colours and was using this to show them how to form secondary colours when you mix primary colours: 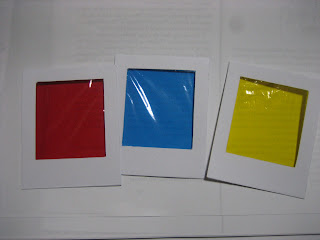 You won't believe how excited they get over being able to see the colours being held up to the light. Then again, I'm still excited over holding these things up to the light and looking at them.
But as fun as today's lesson with Yuichiro-kun and Chi-chan was, that is not the point of today's post.

See, somewhere around last winter, I had this sudden urge to go walking about. It's a rather cheap way of being able to explore parts of Japan that you normally wouldn't be able to take a look at. And it saves on train fare. Plus, it's fun, as Gracia (who is probably a distant clanmember since we share the same surname) can attest to.

The thing is, two Tuesdays ago, after the English class, I decided to try walking back. And while I initially decided to follow the route I took in February (since I'm familiar with the path), halfway through, I suddenly decided to take a different path along the way, that was still heading in the general direction of home, but with which I had absolutely no experience with.

And I don't know why, but that was one of the most enjoyable times I had, just walking along, looking at all the 'new' places, while trying to follow my internal compass.

So today, I started to walk back, somewhat along the same route. I had wanted to follow the same path I took, when once again, my random leanings kicked in, and I decided to follow a different path.

And the same feeling of fun came back.

It's looking around, and realizing that you've never actually seen the place before. It's the slight thrill you get that you don't know exactly where you are (since I choose to go without a map, a singularly bad idea according to my JCC instructors). It's how your eyes play tricks on you, making you see shades of a Singapore from my childhood in the buildings and streets of a suburban Japan in the present, mixed with memories of Taiwan, while at the same time toying with the illusion that this is similar to what it would be like in Bangkok, all the while connected to an idealized, Age of Exploration-esque fantasy.

And I guess, for me, it fulfills a sort of psychological need to go on an adventure. Admittedly, in the unlikely (yes I do have that much faith, as well as residual arrogance, in my navigational training) chance that I do get lost, it won't be that hard to find my way to a train station. But I guess it is that possibility, the fact that I'm not exactly certain of where I am, but that wherever I am is a wonderful new place to explore, that makes such long rambles fun.

And I must also confess that whenever I come to a place where I recognize where I am, I actually do feel a pang of disappointment, that I know how to get back, that I've returned to the 'normal and mundane'.

But until that happens, I guess I'll continue to walk around, trying to find different ways to go on adventures (without having to spend ¥¥!), just me, my iPod, and the joy that God in His wisdom and generosity allows me to enjoy in my odd little endeavours.
Posted by ArkAngel at 5:20 PM