Prologue:
Almost immediately after the 'quake happened, I wanted to go up to help out in some way. When I heard that Crash (which is where I'm volunteering at now) was going to organize teams to send relief, I wanted to be on one of them. However the teams were meant to assess the situation, and they needed people who were familiar with the region, and were fluent in Japanese, both of which I was not, so I had to wait.

Then they started to send up work teams. And I wanted on. I thought, since I don't have any familial responsibilities, and I'm fairly able-bodied, I can go up and do some stuff. Then OMF told me I couldn't because as a short-term worker, I was to be treated even more 'importantly' than a child of a missionary worker.

So of course I was upset, and chafed under my circumstances, bemoaning my being stuck in Tokyo, and berating the lack of logic (illogicy? illogicity? unlogicity?) that would put me, a grown adult (who learnt how to kill people in the army) on a plane out of the country earlier than a 5-yr-old child, if the situation was to deteriorate.

But after considering some things (and getting a talking to by a few friends), I resigned myself to work hard in the Crash office, and not think too much about going to Tohoku. I guess part of it was because I may not have been ready to go up, or that even if I went, there would not be much I could do. And I will confess that pride in being able to say: "I'm doing something!" would probably have been a pretty big stumbling block for me. So I stopped thinking of ways to sneak up, and focused on the tasks at hand (and hanging out with friends at the office).

And that was when Doug called me, saying he was going up on a short trip for the OMF workers there, and asked if I wanted in.

* * *
The trip was fairly normal I guess. I had to stay the night at Tim's place because Doug wanted to leave from there at 6 in the morning, and I didn't trust myself to wake up and get over in time. We packed what they had bought the day before (thanks to funds from Saitama Intl), and then we headed over to the HQ at Ichikawa to meet up with the Jaes, and pick up more supplies that the Chapel of Adoration at provided. 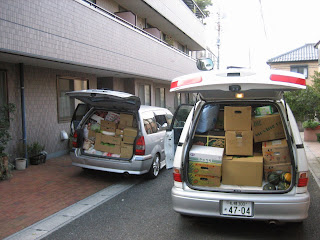 Not quite overflowing, but it was pretty full of food, hygiene products, and clothes. It's hard to see from here, but we were stuffing vegetables into every nook and cranny we could find.
Moving up to Sendai was uneventful. We stopped a couple of times for rest and for petrol, and we didn't feel any different when we passed closest to the damaged reactors in Fukushima (about 80km away I think), but we opted not to hang around in that area too long anyway.

When we got into Sendai itself, the city looked very normal. There were some rather long lines at the petrol stations, but if not, you would not have thought anything was out of the ordinary...until we started to get nearer to the beach areas, and then we started to see some damage. 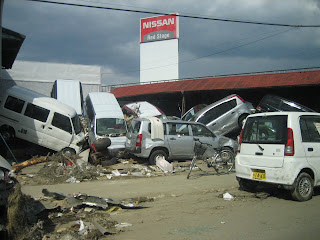 Just some of the evidence that this place was wrecked...and it wasn't the worse.
The roads were clear; it was more than two weeks since the earthquake and tsunami, but all the stuff was just piled up to the sides. Cars, trash, rubble, debris, there was just piles and piles of the stuff. Some of the buildings showed the aftereffects of the quake, but most of the damage was done by the tsunami I guess (and also when they just shoved everything out of the way for the relief convoys to get through).

We linked up with one of the OMF missionaries, Rod, who was actually next to the sea when the tsunami came in; his house was on high ground so him, his wife, and a few neighbours were safe, but his car got swept away. He brought us to one of the distribution centres, where we dropped off most of our supplies (it was good to finally be able to sit normally in the car), and then we went to pay a visit to his house. Along the way, he brought us through Shichigahama, which was one of the worst-hit areas. 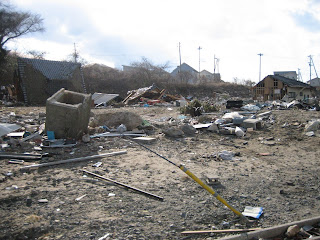 There used to be houses here. Now it's just flat. 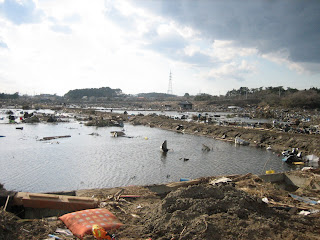 Think this was farmland. It got inundated with seawater, and they'll have to desalinate the fields before anything grows again I reckon. 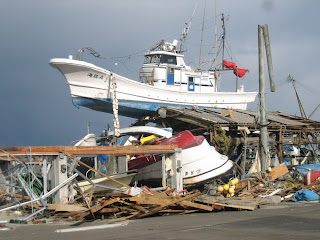 This scene came out in several newspapers and stuff I think. 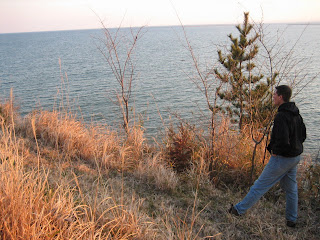 There used to be about 2 more meters of land beyond where Tim is standing. It fell off during the quake.
The next day, we helped to transport some stuff around, and then went to help Rod and his wife start doing some work near his place. We cleared a bit of trash, helped set a couple of fences back in place, and picked up some recyclable materiel that washed ashore. I realize now that my 'able-bodiedness' was not quite enough to do some of the heavy lifting there; I had to carry a 12-foot plank, and boy did I suffer carrying it. 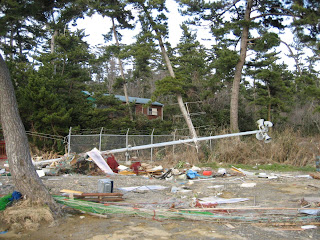 We managed to get the fence in the picture to stand again.
While we were there doing repair work, Tim found an envelope with some photographs showing a childrens' play. The photos were dated 1988, and they were probably washed out from one of the houses. I also saw things on the beach that were clearly personal belongings; a shoe, a stuffed animal, a CD.. and you realize that this is not just 'stuff that was washed up', but that these things actually belonged to living people, who were in all likelihood killed during the disaster, and that's when the weight of it all starts to sink in on you. 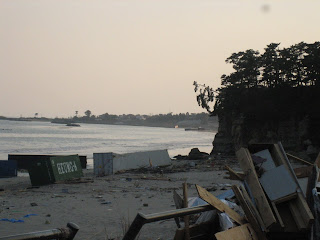 Looks like some scene out of a disaster movie...except this is no movie set, and people did die here.
In the evening, we helped to move more supplies in one of the warehouses, and while we were doing it, some relief workers from Malaysia came by with a couple of trucks to deliver water. There was quite a bit of water, and my arms kept on feeling like they were about to drop out. It was kinda nice to hear people speaking English with the Malaysian accent, reminded me of Singapore. We went for dinner with another of the OMF missionaries, Jim, and his family. (Another odd facet of our trip there was that quite a few of the restaurants were open for business. The conbinis could be out of food like bentos and onigiri, while the restaurants were able to give you steak. Odd.)

Our third day was pretty much just packing up and going back, though we were able to meet up with the third missionary, Joel, and his family. Somehow, I ended up being the caretaker of his younger child, a boy named Leo (I think), who was about 3 (if I'm not wrong). Doug and Issac also got to experience waiting in line for fuel, as we were skittish about going on to the highway without enough petrol in the tanks, and though it took Doug two hours, and Isaac close to four, we were able to leave Sendai around noon, and head back to Tokyo.

* * *
Overall, it was a rather eye-opening trip. There was lots of physical damage everywhere, and the army was there helping to clear things up, but it seemed so atypical of a disaster zone; everyone was calm, you didn't sense there were any shortages, there was no screaming or crying. Maybe it was because it was two weeks old, but it still seemed too placid, too utterly 'normal' for a place that had such violence visited on it.

I guess it was eye-opening for me in the sense that I now know how little I can do to help. I don't have medical training, I can't do construction, I'm not able to help counsel people, and even if I did, my Japanese is not good enough to do so. Even removing debris, I realize is not as easy as I thought it would be (I didn't think it would be easy, but I didn't imagine it would be quite that hard either).

And while the people were going about as if this was all in a day's work, there's no telling how much damage they have inside them, that they are hiding and that we can't see. So I guess right now, we should pray for the people, that Jesus may be able to send His peace to them. Because in the end, food and clothing will not fill them, and will not be able to heal their hearts. Please pray that in this time of pain and suffering, the people may be able to find the One who loves them so much that He is hurting with them. 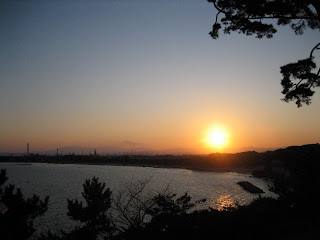 Thanks for this comprehensive post. The last part of your post really touched me. Take care still, and stay safe.

With His love,
Bethia