So having been working helping out at the volunteer organization that is Crash for the past 2-and-a-half months, it would be really remiss not to talk about what I had been up to, especially since I haven't updated this blog in a while. So here goes.

First things first, let's talk about what Crash is. CRASH is actually an acronym that stands for Christian Relief, Assistance, Support and Hope. It was started by a missionary (I think. But he's been in Japan for a long time, and his wife is Japanese) called Jonathan Wilson, who was thinking of how to help Christians coordinate their efforts in order to help people who have been hit by a natural disaster. And they helped out in Haiti and the Sichuan earthquake and a few other things.

So, I originally went down on the Monday immediately after the 'quake. I had watched the livestream of the meeting they had on Sunday, and I thought, 'hmm, people are gonna be wanting to help, and I can't do much, but I *can* buy coffee and donate that!', so I bought some coffee (and other things) at Seiyu (the queues were really long that day), and lugged it over to the Crash office. And I thought, 'hmm, maybe I can help out a bit, because they probably need volunteers, and I can help out this week maybe, and then I'll be done.' And so I asked an OMF missionary there if there was anything I could do to help out just for a bit. And now I'm still there, so obviously, the part where I said, "Just for a bit" didn't really get transferred across.

Initially, I was under this guy called Corey, and we started off with a sort of Registration/Reception hybrid, that slowly morphed to include office management, which was what we were called for about a month or so. It should be noted, of course, that most of the volunteers did not have much experience in the category of "Setting-up-relief-work-company-quickly-and-with-mostly-volunteers-for-staff", so it was really messy. It kinda still is, but we're slowly getting more organized. 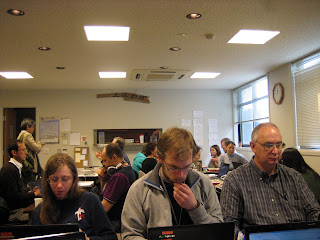 So this was the old Reception/Registration/Office Management/Placement/Screening/Registration+Reception in that order I think. Incidentally, all three of these people are no longer working at the CRASH HQ (maternity leave, gone to Aomori, gone on Home Assignment)
So my first job was to call up volunteers to ask them when they could be free to come in and what they could do to help out. And that would explain my astronomical phone bill for the month of March. And then we had to grab all the new people and get them to register. And we sometimes went out to buy stuff for the office, like ink for the printers, paper, pens, post-its, more ink for the printers, scissors, tape, even more ink for the printers, and nametag holders.

I ended up making nametags too. In my personal 'room'. 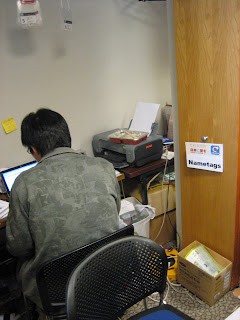 No it's not a closet! It's a room I tell you! A room! *controls sobs* It's a room!
And then they started to do some restructuring. This was about the time some people who had experience in the category of "Setting-up-company-from-scratch" came in, and they started to reorganize. And that was when I, because I was making nametags, ended up in the Logistics unit.

And now I know why I was posted to do Log work while I was in the army, because now I have some idea as to what working in Logistics will require. (Yes, you may have to move big boxes of heavy stuff around. No, you cannot eat the food that people are donating). 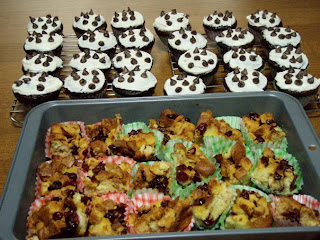 And people do donate food. But these ones are for staff to eat, so we can eat these ones. Thanks Bola!
I have also developed a slight amount of IT ability, because of my proximity to the resident IT expert, who incidentally also goes by the given name of Daniel. While I'm sure some of said ability is due to the IT aura which surrounds him, most of it is the result of the following scenario:

Person A: Hey, I need help with my computer.
Person B: What's up with it?
A: It's this problem.
B: Oh, hmm I don't know. Go and ask Daniel for help *waves vaguely in the direction of the room where both Daniels reside*

And because they don't specify which Daniel to ask, they end up asking the one nearer to the door, which is me.

The worst part of course, is that sometimes, I actually do solve their problems, which makes me look like an expert in things IT, which I am not, but which continues to feed the myth that Daniel-Logistics can do IT. 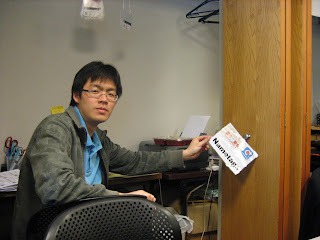 No, I'm telling you, I just make nametags. I don't really know how to solve your IT problems! You've got the wrong Daniel, I tell you! The wrong one!!
One of the really nice things about working in such a community is that you get to meet friends. Now, in my normal work with OMF and housechurches and stuff, I do get to meet quite a few people, but it was quite...limited, I would say, in that all the people I meet are somehow connected through OMF. Which is not a bad thing, just that it's a very specific group.

Now however, with so many people volunteering at CRASH, I not only meet the OMF friends, but people from other places, whether it's from other agencies, or they are Christians who have time and just want to help serve, or even some who may not be Christian, but have come down to help out in whatever way they can. 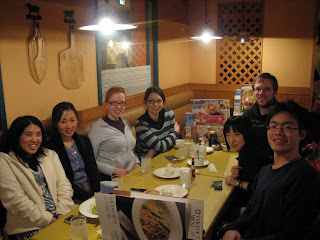 Some friends.
But the greater thing is being able to see how God is using some of us to help serve the people in Japan. And I don't really see much because I'm in the back room of the HQ, but we do get reports of how people have been helped through our ministry, and even more than that, that people are able to see God through the work that we do.

So perhaps I'm not getting paid very much (read: none) for this, but it would be hard to deny that it is fulfilling.

Prayer Points:
Ok, that's about it.
Posted by ArkAngel at 8:07 PM

Hej! Finally ended up on your blog and it's fun to read your stuff. I can see your facial expressions with it. Also the one that comes up on your face reading this right now. (I think) ;)

Keep up the good work at CRASH! It's great that you can be of such a help there. I would love to hop in there! Pray for you guys.