Took a little too long to get back to this.

Our final work day at Ichinoseki was a little different. We knew before we got down to the volunteer centre, that Onodera-san was not getting volunteers, as she had requested none on that day. So Nobu said that the first one that comes along that can fit one of our groups, we should just take it. And so we were separated from the CCC team.

We were assigned to do photo-recovery work at a nearby sports hall (I think), and we did not take our car with us this time. One of the volunteer centre staff dudes drove a few of us out in a van, and he took us through the part of Kesennuma that was hit the hardest by the tsunami, and by the fires that broke out after that. We had seen damage of course, but it still kinda cast a pall over the entire car when we were driving through it, and he was telling us his experience. 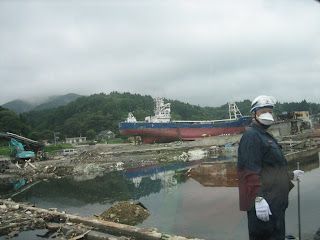 Yes, that is a container ship that was washed inland.
Photo-recovery work was a lot different from what we had experienced up to that point. We were working indoors, so it was cool. There was no construction work going on, so it was quiet. There were chairs and tables, and all we had to do was to salvage as many photographs as we could from photo albums that had been pulled out of the wreckage, dry them off, and put them in new albums.

Now, if you know what some of those albums are like, each 'page' is made of stiff paper which may be sticky, so you can plonk your photo on it. And then there's a plastic film for each page that goes on top so that it can be protected from spilled drinks and the grubby hands of people. What we had to do was to slowly peel the film off (hopefully without peeling off the picture), and then cut the picture off the 'page'.

And it seems like a relatively cushy job compared to the physical stuff we had been doing, but now I realize that finesse can be as stressful as doing hard manual labour, bending over the tables, controlling your movements so that you don't damage it any worse.

And the albums smell bad, because they were in the sea. The moment we opened it up, we got a powerful whiff of it. And we have to keep our faces near the books so that we can see what we are doing (though we kinda get used to it after about an hour or so).

And this is also where it kinda hits you a bit more, that these pictures may be the visual remnants of someone who may be dead. When we were working before, it was physical stuff, and the owners were still around, and they had friends and family who got swept away, but, you know, you're still kinda distant from those other people.

Now? You're looking at them smiling at you from the pages of a photo album which were meant to be a memoir for them, but instead, is giving you a window into the life of a total stranger who you will probably never meet.

There were photos of vacations, and houses and plants, but the ones that really struck me were those old photos of children, or a child with his mother, because they remind me of the photos my grandmother had when she was young and my dad was a kid. And these are treasures, because those are the only copies. In our digital age, where we can take thousands of photos and have backups and store it on hard drives and print out a billion copies, we forget (or don't know, perhaps) how valuable a photo was.

It was only 4 hours of work, but it was a lot harder than we thought. We got a ride back to the volunteer centre, and then we headed back to base, and that was the end of our volunteer work in Ichinoseki.

We also went out to Rikuzen-Takata to do a short prayer-walk around the tree. This tree had been in a grove of 70,000 that had been a park/breakwater, but now it was the only one that remained. It gave hope and courage to the people I guess, in the '頑張れ (ganbare)' way, to just push through adversity, and they are desperately trying to save it from the seawater that had gotten into the soil. (Side note: On the way down from Tono much later, we drove past the tree again, and it looked a lot worse.)

The pine tree
On Sunday, we went to a church in Kesennuma. They did not have a sermon, but a guy shared his testimony of doing volunteer work (he had been helping out at the volunteer centre as one of the staff). It was somewhat sobering to hear that everyone in the church had lost someone they knew, but the church members were all very kind to us, and welcomed us warmly.

The CCC team left for Ichinoseki station after that, to take the train back down to Tokyo. Our team went to find a ramen shop (someone wanted to eat local ramen), and then we went to the summer festival in the town (Murone town) near the base. We had been invited by this guy who had driven all the way up to the base, so we felt that we should go. 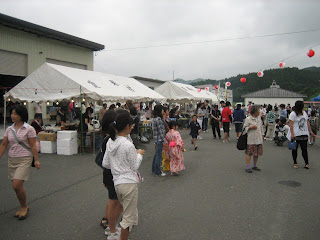 Summer festival at Murone
It was a lot smaller than the ones I had gone to before in Tokyo, even the one in Tokorozawa, but then Murone is a pretty small town, and they were using a rather large place to stage it. It also felt a little too cold for a summer festival, as it had been cloudy and rainy all week long, so the temperature had dropped quite a bit.

We met the guy who invited us, and then we found out why he wanted to invite us; there was a log-cutting competition, and he was supposed to get people. So he signed all four of us up. I ended up squaring off against one of the local guys, and the result wasn't exactly pretty. I am not particularly strong, and I was not used to the small one-handed saw they gave me (it cut on the backstroke, whereas I'm used to a two-handed hacksaw that cuts on the forward stroke). And then I cut myself. 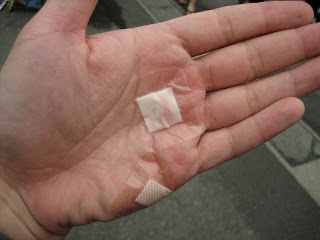 The aftermath. This was after the 'first-aid person' (in apostrophes because the first thing she did was to stuff cotton balls on the wound) and Marie had nursed me back to health. Incidentally, I noticed all the contestants wore work gloves after that.
But it all turned out well. We got to see fireworks that nights, and I got an iMax experience because I was lying down on the road and the sky was my screen.

Monday was our off day too, and after kinda lazing around hanging around the base, some of us took a walk around. 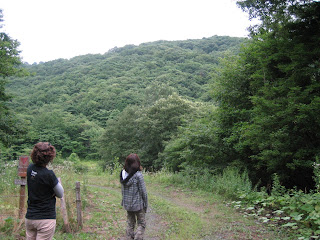 Ichinoseki base is located in a really beautiful area.
Near the end of our travels, Laura, who was trumping around the area with us, started to feel pain in her foot. She had tripped while walking around the base before we left for our hike, and when we got back, her foot was purple. Roberta prodded her a few times (she has some real nursing knowledge), but it seemed to only be a bruise. We found out after we got back to Tokyo that Laura had broken her toes in five places.

And that is about all. We left the base the following morning, saying goodbye to Woody, his wife, and a couple of new staff that had come by the night before, and reached Tokyo around 8.30 or 9. It was a really good trip, got to see (and help out) in some of the work there, and got to know each other better during the trip.

And now, a final word from the 'safety officer', who cut his hand sawing a log: 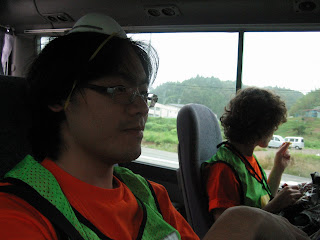 They always say to wear a breath mask and a helmet; I combined the two and wore a breath mask as a helmet. Remember, 安全第一！
Posted by ArkAngel at 7:29 PM