We'll now have a break from the Ichinoseki recollection, and have something about what's going on in Tono.

I came up to Tono (in Iwate Prefecture too) almost a week ago, and three days after I had returned to Tokyo from the Ichinoseki trip (just enough time to wash all my underwear). It was hard to leave at first, because unlike Ichinoseki, I had to come up by myself, and I had to leave stuff in Tokyo that I did not really want to leave. But I reached the base fairly uneventfully (though the trains here don't run quite as... often.. as the trains in Tokyo).

I've had to do the dinner cooking and stuff, and so far, it's not been too bad. Fortunately, the first few days, I only had to prep food for about 12 people, though right now, I have to get enough food for close to 30.

And last night (Day 5), was when I started to get a little stressed. Now generally, I don't get too affected by work stress. I tend to just sleep it off. But last night, I decided to make spaghetti, and I foolishly did it without looking at a recipe. I decided to try it with a small batch first, and at around dinner time, it was still kinda bleah (I thought. The others thought it was fine). It didn't help that everyone was coming back late, so Plan B, which involved going out to buy instant sauce, was not gonna be easy to coordinate. After all, everyone was tired and asking them to drive to run errands would have been hard.

But I got encouraged by two people. One of the guys from the American team, Jon, offered to drive me out to the supermarket when I mentioned the need for a driver, even at the expense of a trip to the sento for him, and after a full day of work. While on the way there, I got some more encouragement in the form of a virtual bottle of energy drink from Marie in Tokyo. Stress was still there of course, but it was a lot easier to bear after that.

The following day, base management decided to bring everyone out to eat dinner, which meant I did not have to stay back and think of what to prep for food. So I was able to go out with one of the teams to do some work.

I ended up being part of a group that went back to Rikuzen-Takata. The job that day was to go to pick up rubbish in a spot where the tsunami had kinda gone through. II really couldn't understand much of the briefing, but when people started doing work, it was pretty easy to just take a look and follow. 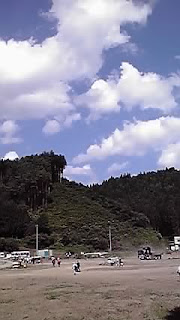 We were picking up pieces of rubbish from the sandy area.

At first, it seemed a simple enough task. I mean, it was just picking up rubbish right? But as I was picking up some trash, and noticed that there was even more trash that had been buried in the soil, I started to wonder, how meaningful was our work? After all, prior to this in Ichinoseki, we had worked in a way where there were clear results happening, whether it was cutting weeds or talking to people. But as I picked up one piece of garbage, I saw 3 more pieces. And it just did not seem to be getting any less. It was not being done in an organized manner ("just go and pick up rubbish around here" *waves hands in a vague circle*), which meant that groups coming in the next day could, and probably would be working in the same spot, which would not be altogether pointless considering the amount of rubbish still there.

But even as I was thinking that, I knew that I was picking up one piece of rubbish, and that that piece of rubbish would be gone from the site, and even though it was just a bit, it was still that little bit that was gone from the area as they try to make the place livable again. And I guess what I was doing that day was just a 'drop in the ocean' so to speak, but eventually, all the rubbish will be cleared, and the little bit I did to help would have played a part in making that place habitable again.

your blog & article is very nice!!