The first I heard of my being sent for the basic reporting course (BRC) was when we had just come back from dinner one day, and Janice (who sits behind me) turns around and says, "I didn't know you're going on course."

Now, I didn't know it either, but she had been looking at the subs roster that had just been sent out, and I was penciled in as being on course for most of the month of September.

I was not particularly enthralled to be going on a basic REPORTING course because one of the main reasons I wanted to be on the subs desk is because I'm not a terribly extroverted person, and I  would very much have preferred to not have to talk to people I don't know (which sounds incredibly weird for someone who's entire job experience up to that time was being a reporter and a missionary and which kinda requires you to go out and talk to people).

The other subs were strangely envious of me when I mentioned it to them though. Quite a few were going like, "Wow, you got a month-long holiday!" or, "It would be great if I could get normal hours for a month." (Just fyi, subs work from about 4.30 in the afternoon to 1.30 am). I was somewhat surprised, since I was rather happy at the subs desk, and I was just starting to get the hang of things after a month of work.

One of the other subs called Rajan (who's user name is the incredibly cool 'Trajan', thus making me think of the Roman emperor every time I see it in the system) told me that his time on the BRC was the best time of his life in SPH. And how he would always go drinking with the other dudes on the course, and how he still kept up with some of them. He told me that I should just try to enjoy myself. He did mention how part of the course was going out to actually get stories, which only made me feel bleah.

The email from the head of training didn't help much either. He talked about how he expected us to be like good reporters, always questioning and asking stuff and all. But the other subs told me on my last day there, that I should just go with an open mind and see what I could learn and stuff, which I resolved to try and do.

And surprise surprise, I actually enjoyed myself on the course. The email from the head of training, Paul Jacob, sounded really serious and all, but he wasn't that frightening, and he had quite a few good points for us, even though he did tend to mumble a bit at times. The course itself had lots of useful information, even though it was meant for reporters and not subs, and they gave us free food every day!

The other good thing of course, was that I got to meet quite a lot of other people from SPH. I got to know a few of the other ST reporters, who's names I've seen in bylines but whom I've never met before, as well as many others from different parts of SPH. 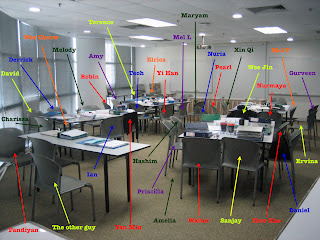 Got to know most of these guys in my time there. Even though I never knew who the guy who sat at the back was. Incidentally, while most of the names point at the chairs the people sat in, Amelia's and Wee Cheow's chairs got moved because they had to go on a different course for the last week, so their chairs got moved around too.

In particular, I got to know Sanjay, Chor Hao, Hashim, Terence and Elrica, since this was the usual lunch group I hung out with. Think Terence was the one that said that the good thing about being on course wasn't so much the stuff that you learn about work, but in getting to know others from different departments and seeing how they work. At any rate, we managed to form a pretty good bond (along with several others), and hopefully, we'll continue to be able to chill out in the future, though it may not be that simple, since I work at night and Hashim works in a completely different building.

In the last week there, it was kind of a bummer knowing that it would end soon, and our relatively relaxed lifestyles over the past month would end. Back to work, where instead of hanging out in groups, we'll be expected to work independently. But it was a good run, a good time, and maybe some day, we'll end up on the same course again.

So see you guys around the newsroom sometime. After all, it isn't that big, right? 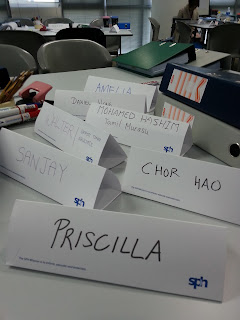 The guys on my table. It was great spending about a month with you guys.

P.S. I never had to go out and get stories. They scrapped that part of the course, for which I am exceedingly grateful.
Posted by ArkAngel at 3:22 PM