Just before I left Japan in June last year, the ladies of the E-moms group threw a farewell party for Steve and I. It was really nice, good food, a homemade cake, and laughs all around.

They also gave us a cup each. Like so: 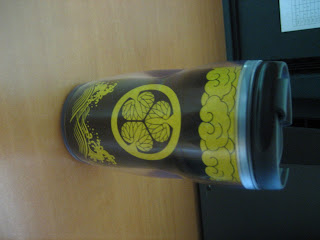 The cup they gave.

Now I was rather pleased with it, since being a history buff, I instantly recognized the crest as belonging to the Tokugawa clan. Plus, there's this famous Japanese drama called Mito Komon (水戸黄門) that like everyone's heard of, and which I sometimes use to tell people what my kanji surname is (黄), and the main character in the show has this Tokugawa seal that his adjutant displays near the end of each episode to kind of establish his authority and judge the bad guys.

The old guy in the yellow and red suit is the Tokugawa fellow, who's like the hero of the show.

But I digress. So anyway, this cup has proved most useful to me as it has allowed me to contain liquids of personal sustenance that I desire while I am at work. Most of the time, it is plain water from the cooler out at the back, especially when I have cycled to work. But since one of its properties is heat retention, there are a couple of times I desired hot drinks.

So one day, it was cold. And I was exceedingly sleepy, for some strange reason. It got so bad that I finally decided, ok, I can't take this anymore, it's time to use one of my coffee sachets and make instant coffee.

So I emptied my coffee stick into my cup, and still feeling kinda sleepy, I toddled off to the pantry to fill it with hot water. As the hot water went in, I realized, rather unhappily, that not all the powder was getting mixed; instead, quite a bit of it was stuck under the top layer that was mixing with the water, and was not getting dissolved. You can sort of realize this when bubbles start appearing, which means there are lots of air pockets which in turn implies lots of powder not getting wet.

I was stuck, as I did not have a stirrer or spoon with me, and as the water was rather hot, I was not inclined to use my finger. In my sleep-addled state, of course, I had forgotten that there were probably stirrers at the nearest coffee-maker, but of course, I did not realize this at that point of time.

I was somewhat bummed out, then I had this absolutely brilliant idea. I decided to simply cap my cup (since it was fairly watertight), and swirl it around.

Brilliant! I thought to myself as I started swirling it. This should do it. And then, another even more brilliant idea popped into my head (though later events would prove that it was not as brilliant as I thought it was). I decided then to shake my cup, to make sure everything was well-mixed.

Unfortunately for me, after about two shakes, the coffee exploded out through the side of the cap, due to some effect involving heat, water and air in a confined space that some physics major can explain to you. Not a lot of coffee mind you, but it squirted out in a fairly violent manner, essentially painting the partition and part of the CPU with coffee (you can see the area that got hit. It's just behind the cup in the picture above).

It was after this, while scurrying about to clean up the mess I had made, that I remembered about the nearby coffee-makers and the stirrers that were in all probability there. Fortunately, not a lot of coffee came out, so I didn't really scald myself, though the area smelt of coffee for the rest of the night.

I did wake up fully after that though. Nothing like a major shock to your mind to get you out of your stupor.
Posted by ArkAngel at 2:55 AM

Labels: Not the brightest idea