About a month ago, one of my really good friends from St. Andrew's School (no, we don't have the word 'secondary' in our school name) got married. Alvin was the only guy I was classmates with for all four years there, either through chance or misfortune. But whatever it was, while we didn't always hang out together all the time back then (something to do with the fact that he was a prefect, I believe), we struck it off really well in Sec 1, and remained close friends till now. 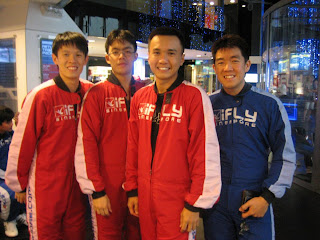 Alvin is the one on the left. Coincidentally, this was taken almost a year before that, when the other Alvin (2nd from right, also known as Fuzzy) was about to get married. And even more coincidentally, both are married to girls called Amanda. The dude in blue is Joel, Fuzzy's best man.

A couple of weeks later, another of my secondary school mates tied the knot. Unlike Alvin, Sam was my classmate for only a year in Sec 2, but we were mates for all four years and then some, as both of us were in the Boys' Brigade. When you suffer together (since the 7th Singapore Company was an old school unit that believed in the value of corporal punishment to instill discipline), you do form some pretty close bonds. 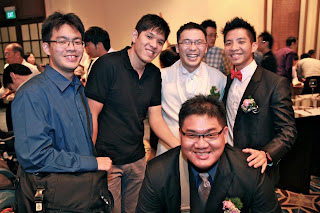 Sam Tan is the dude in white with the biggest smile on his face, as befitting his happy day. In Sec 2, myself, he and Gerald (with bowtie) formed a little clique that came up with rather... embarrassing names for each other. Shaun is the fellow in front, and incidentally, there's another Sam, in the black polo.

Two weeks after that, another of the old BB boys from my cohort got hitched. Marcus was always ready for a joke, and I have to admit, he still hadn't changed at all much since we graduated more than 10 years ago. 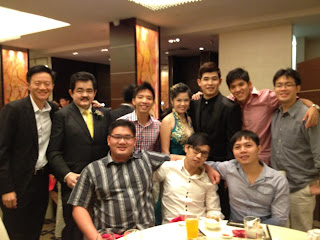 BB 7th Singapore Company Charlie Batch ('97), plus Marcus's bride and his father. Marcus is the guy to the right of the only lady in the picture, Darius, is the one all the way on the left, and in front, next to Shaun, are Kelvin (in white) and Jiancheng. I'm pretty sure you can therefore figure out who the father and the bride are.

It's always fun to be able to meet up with old friends, to find out how they are doing, to see how their lives are like. And over the years, I have made many friends (hopefully not so many enemies). But one thing that always stands out whenever I meet some of my secondary school friends, either one or both of the Alvins or a group from the BB, is that no matter how long the interim, or under what circumstances the meeting, it's like time has never passed. We all slip so easily back into the bantering as if we were once again carefree youths, old enough to have some independence, but still young enough to not have to deal with too much of the responsibilities of life that invariably weighs us down.


I have to admit, of all my time I spent in school, I have always had the fondest memories of secondary school. And I do believe, part of that is due to the people I met there that I'm proud to call my friends.
Posted by ArkAngel at 1:19 AM