Had a slightly longer day last night, thanks to the readings I was trying to finish reading for the tutorials this morning. In fact, I stayed back later than normal, and only left when J ran into me in the SMC and sort of persuaded me to leave with her. Yeah, I even had to skip the first Kairos Course class to try and finish off all my readings and even then I didn't.

Regardless, the week has been pretty ok, despite the double mid-term test I had at the beginning. I know God was with me for the tests, cos in the language one, I did manage to get most of the stuff, think I can pass that one. And even for the US history one, I believe God granted me the peace of mind, so that I wasn't quite freaking out during the test.

To cap things all off, I have declared an S/U on my Physics mod, since I really don't think I can handle it anymore. Haha. Thought my JC level physics was enough... I was so wrong. Anyway, at about 12 noon yesterday, I declared the S/U while in Science. And, I found something interesting.

Take a look at this. This is the screen after I had just clicked the "confirm" button. 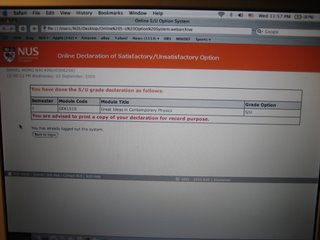 Oh. You don't see what I'm trying to drive at? That little phrase above the "Back to Login" button? OK. Let me enlarge it a little bit more for you. 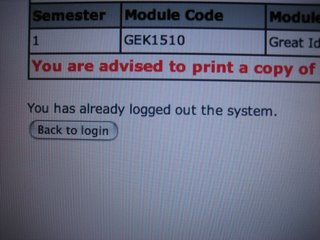 Wow! Please remember, that this is coming from one of the world's top 18 universities. And it is English based, so although we aren't exactly a English-for-mother-tongue country, I think is not quite inexcusable... In fact, it reminds me a little of another rather famous quote, or at least, it's a video clip...

Yeap ok. Back to work for me. Got the Film and History essay due in about 12 hrs time.

Cheerio
Posted by ArkAngel at 11:23 PM

Well, in the words of many an American whom i've encountered here so far:

"You're from Singapore? Wow, your English is so good!"

Maybe they was wrong after all...

My guess is that the program might have been written by a prc :P