Some stuff went on the past couple of weeks, so I've got a bit to ramble on about. Plus I was trying to wait for photos from F, and I was lazy (as usual).

So let's start from the most recent happnening. Which was that today, some of the peeps from VCF CG came over to do baking, and play a bit of Xbox. Or at least, that was the idea. It kinda ended up more like playing Xbox with a bit of baking. And being sick as I was, I fell asleep again in the mid afternoon, just after I had finished with the cookie stuff and the other 3 were screaming about how Darth Vader was coming to kill them. At any rate, the oatmeal raisin cookies came out surprisingly edible, despite my mom not being around, and yours truly not having had any prior experience with oatmeal raisin cookies. Maybe a bit too clove-ish, but well, still edible.

Yesterday was when we were supposed to do our church C@tB thingy at the CCIS thingy at Orchard Road. And we were all prepared for it, and I was coughing (as I am wont to do when I have a bad cough) as if I had TB. Anyway, it was raining when we got there, and the rain sort of seeped into the bus, so my left shoe got wet, and my bass case got wet, but thankfully, the bass stayed dry. Then we heard that it was cancelled due to a short circuit in the system.

C@tB on Saturday was really fun. Even though I made quite a few mistakes while playing, the whole Christmas message and stuff was put across, and it was good that we as a church could reach out to the community. Must say that the group of youths from the CC who put up a hip-hop dance were really good. And our church dance group also was quite nice. It was rather warm though, since there was lots of plastic tarps used as shelters, and it got kinda humid. But also, really thank God for the good timing and weather. It didn't really rain during the time we were having the event, so people were able to come down and play at the game stalls and stuff. And near the end, when we were playing our finale piece, the floats from Orchard Road came by. As in there was an arrangement for them to come up, but it came just as we were playing Feliz Navidad, and I thought that it was certainly rather timely. So thanks God, for arranging it like that.

Thursday and Friday were the practices for the C@tB. Nothing much else happened then. Just that I was coughing with me TB-like cough. And after Friday, my fingers hurt, cos playing bass causes some minor damage to fingertips.

Monday to Wednesday was really fun stuff. We went to this place near Batam called Telunas Beach for the senior youth camp. It's a really cool resort place. It's like built on stilts over the water, a bit like a kelong. And it does have white sandy beaches and clear waters, open skies etc etc. And the dude who was like the manager in charge, this American guy called Eric, he was really hospitable and friendly. And it was a really cool camp, because unlike last year, P.J. took it easy this time. It was more a relaxed camp with some teaching and much fellowship, as opposed to last year's training camp. Here are some pictures: 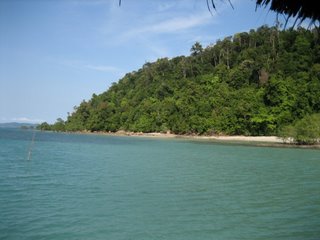 I wasn't lying when I talked about the white beaches and clear waters etc. This is the view from the back of the older guys' room. (We were kinda segregationist, and the lot of us took this room. All the rooms have the same sort of view though). 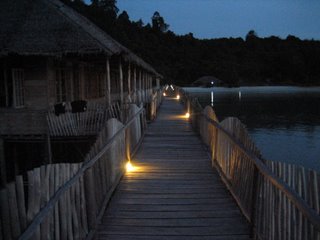 This is the view from the dining hall to the rooms. Our room is the first one directly in front. 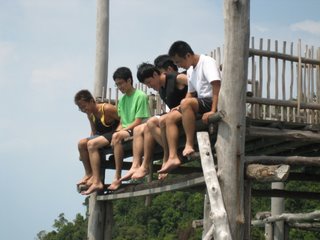 This is the Guyros guys looking on in trepidation from the top of the high jetty jump. Just so that you know, one of the fun things we did there was to jump off the jetty into the sea. The jetty itself is about 2 meters above the sea, and just about everyone jumped off it. But the high one, is probably about 4 meters up? It's really high. And I think only half of us jumped off that one. 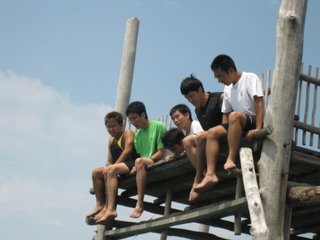 This is the shot immediately after the one above it. As you can see, only my eyes and nose are visible from the edge of the deck. This is because I had looked down, and realized that the water is a lot further down when you look at it. 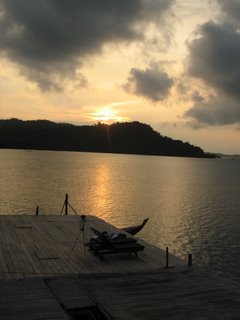 This is the view you can get from the top of that 4 meter high deck that we were talking about, albeit with a little bit of altering by me in the form of length of exposure. But yes, notice the wide expanse of sea, and the skies, and the island in the distance. I tell you the view is great. 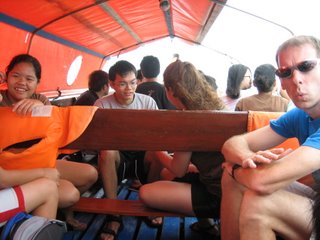 And finally, this is the boat ride back. Yeap, that's Eric at the right hand side. He's a really cool dude.

So anyway, this camp was really great. but the best part was being able to sense God with us when we were singing songs on the deck on the second night. The first night was kinda cloudy, but we had quite a fun time on the deck just hanging out there. The second night was a really clear night, and there were thousands of stars in the sky. And even though we didn't really pray it out, I think God knew we wanted to be able to take a look, and He answered our prayers. And I must say that standing there, and being able to see the awesome wonder of the heavens, is something that really does help you draw a little closer to God.

Oh and the other great thing about how God answers prayers? We had no rain for the time we were at Telunas. Dark clouds started gathering on the trip back to Batam, but it only really started raining when the ferry left Sekupang port for Singapore.

Oh and one more thing. God also helped A get into Batam, cos his passport had just under 6 months left. But God was gracious, and the dude at the immigrations didn't make a fuss out of it.

Please go to Farand's photo link to see more photos, if you're interested.

The Saturday before that, which is 9th of Dec methinks, P gave me a belated brithday present. It was really sweet. Like, literally. Haha. OK. It was a nice edible apple thingy, but it kinda leaked, so I had to quickly eat it and could not bring it home. And in my haste, I forgot to take a picture of it before consuming it. Oh well. Thanks P! And on the subject of birthday wishes, some of the CF people in school swamped my phone with SMSes, wishing me a happy birthday along with a happy exam, since I had a Japanese paper on that day, and D sent me a birthday sms from Aussieland again this year, though from Melbourne instead of Perth. And I think she forgot the time zone diff, so I got it at like 9pm the previous evening. But well. Haha.

Thanks God, for all that You've done in my life.

Cheerio
Posted by ArkAngel at 12:06 AM