Now that I have internet...

... I really should try to find some way to update regularly so that people back home know that I'm still alive and stuff, and hadn't overdosed on instant ramen or anything.

Well, it has been two weeks or thereabouts since I last put up a post, and so this one may be a little long, but I shall start with the thing that has allowed me to blog from my own apartment, instead of from Uncle Louis'.

I got my internet on Tuesday. Naturally, I was rather happy, since I am now connected to the rest of the world, particularly Singapore. And with MSN and Skype, I can have relatively cheap conversations with the people in Singapore, rather than use my Singapore phone, which was probably costing me somewhere around $30 a minute or something.

So here it is, my internet provider: 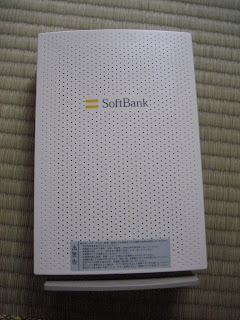 This little box gives me access to internet, which allows me to communicate with people, find out where to buy ramen, and watch the scores of the NBA finals.
Like I mentioned, I was rather happy and excited, which would explain the state of my bed at that point in time: 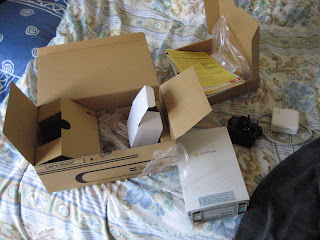 Oh what joy!
Louis turned a half-century a couple of weeks ago. It was such a big event that he got three cakes from his friends. Once on the 17th, once on the 22nd, and once on the 24th. Due to time constraints, I shall only post up one of the pictures: 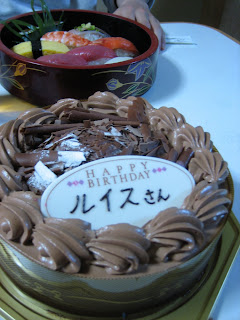 The characters on the cake say "Louis-san". I'm sure some people are more interested in the sushi that's in the background though.
I really want to post more stuff up on the blog, but I just went for kids' club today at 花小金井 and even though there were only four kids, I'm pretty zoned. Plus JP decided to teach us some dance moves then, but we didn't warm up, and I may wake up screaming in the middle of the night because I get leg cramps. But yeah, perhaps I shall get more stuff up next time.

yoz! don't forget about the pictures we took together!

Was going to, but starting spacing out real quickly