So the temperature in Tokyo has started to get really rather warm... Sometimes, at 10am here, it's like Singapore at 1230. The only thing I can be thankful for is that it really isn't quite as humid as in Singapore. And also for aircon. I finally had to start using this wonderful invention this past week. Before that, I could get by on a fan and an open window. Now, when you open the window, it's too hot, and when you close it, it's too stuffy. Hooray for summer.

One good thing is that the chances for nice photos is greatly increased, thanks to the clear skies everyday. So I can find pictures like these: 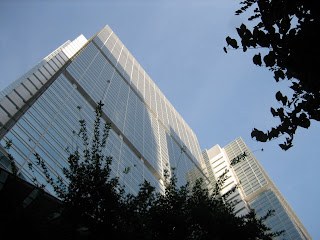 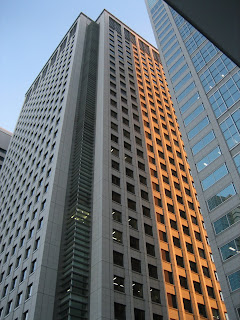 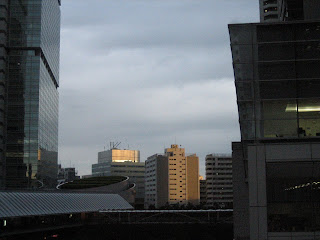 Shinagawa really is a pretty place.
But anyway, let's move on to what I have promised for so long. Having lived here for slightly longer than 2 months, I have more or less learned to take care of myself. And I shall show you what I have as a regular diet.

I usually try to make sure I eat a balanced meal, like this: 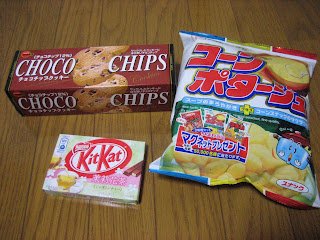 A balanced meal. It contains the three Cs of Cookies, Chips, and Chocolate.
Ok, ok just kidding. I only eat this for snacks.

Here is a standard sub-meal at your local fast food joint. It is merely a sub-meal, since it doesn't come with fries and a drink. Also because I was eating it for supper with JP when he wanted to use the wireless at MacDonald's. The wonderful thing about these two items is that they are both from the ¥100 menu. 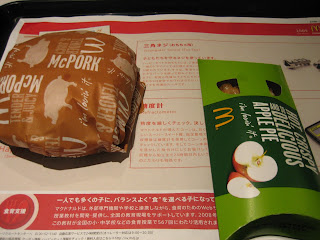 Everytime I tell someone in Singapore that there is McPork here, they start laughing their heads off.
Usually however, when I go to MacDonald's, I only get the milkshakes, or a small drink, which are also from the ¥100 menu.

But, I'm sure you want to know what I eat at home. 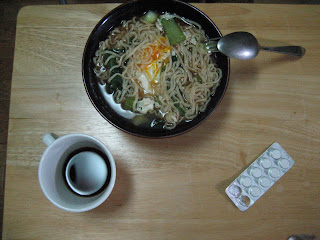 Starter meal: Not including aspirin
Of course, the way I started off was with instant ramen. Which tastes very good, though if you don't rinse it after boiling it, you're eating a lot of wax, according to various health experts who have talked to me about food. As you can see, this is a real balanced meal, with vegetables and stuff.

But as fun as eating instant ramen is, you really can't eat it all the time. So I have found another form of nourishment from nearby convenience stores: 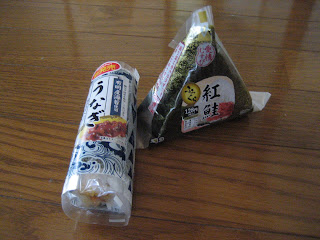 This is even better! It's rice, protein, and vegetables all *rolled* into one! haha! Get it? Get it?
The wonders of the onigiri are that they are cheap, there are many different varieties, they are 'mobile-foods', and I like 'em. JP likes 'em too. So on days we want to save money, we eat a couple of these for a meal and we're set.

There, of course, is also the wonder of frozen food: 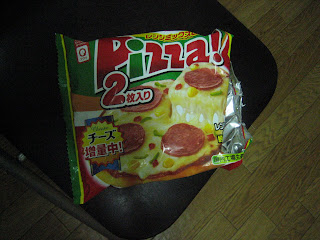 Mmmm.... Just like in college...
This one is pretty nice to eat. Of course, it's probably chock full of preservatives, which is why the other option for pizza is to buy a bottle of sauce and put it on bread.

One thing I did try was to use spaghetti sauce on rice. I was hoping it would be like those baked rice sort of things: 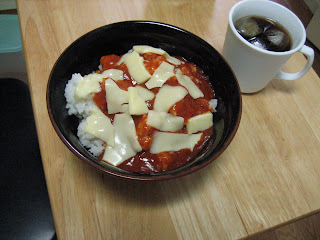 Isn't really much to look at.
It was edible, but the taste of the spaghetti sauce was a tad too strong for my liking. Which is part of the reason why I have not done it again. (The other part is that I had only one packet).

I have done some real cooking of course. The first thing I really tried was to do simple stir fry vegetables and some stir fried chicken pieces. The vegetables came out ok. The chicken, on the other hand, was tasteless. That's when my mom and friends told me that I had to use soy sauce. Cooking 101: Soy sauce is important.
The next thing I tried a hand at was the Japanese style curry: 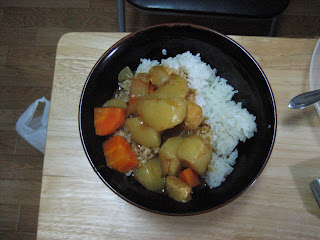 Was a bit too watery and the carrots were not cooked enough.
It tasted ok, and I think, if I remembered correctly, I had a pretty decent meal. What you can't see from that picture, was that I had made way too much, and I was resigning myself to eating curry for breakfast, lunch and dinner for the next few days. Fortunately for me, Steve and Kathi, who have moved into Louis' place, invited me over for dinner, and I offered to bring the curry over. 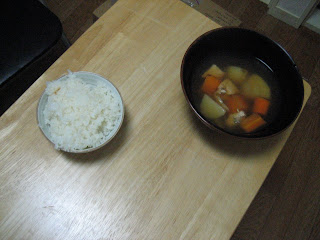 If you think it looks familiar, yes, I did use the other half of the ingredients from the Japanese curry for the soup.
It was pretty ok too. Unfortunately though, it was apparent after cooking that I had not learnt my lesson from Japanese curry, and I made too much again. Unlike last time however, Steve and Kathi couldn't bail me out this time.

I did make some real curry though. As in, like, Singaporean style curry. This was when Steve and Kathi hosted a short term team from America, and they were gonna have a curry dinner. So I volunteered to help out by making a pot, and fortunately, no one got stomachaches. Or at least, if they did, they didn't tell me. 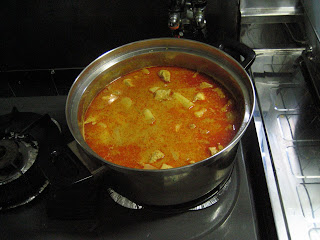 The 'Singapore' curry.
Of course, what I feel was my best self-cooked thing is this: 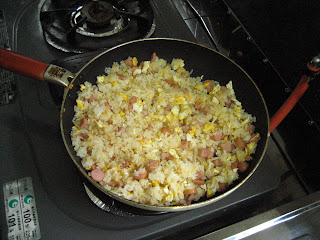 Brother's favourite food!
And the funny thing was, I was using dad's recipe. Haha. The last time he cooked fried rice was somewhere in 2003 or something, and it only had egg. And rice. But he passed me his recipe (not sure where he got it from), and well, it works pretty well.

Cheerio!
Posted by ArkAngel at 9:25 PM