Today, after Tokorozawa Housechurch, I decided to take it upon myself to go to the Uniqlo around the Tokorozawa - Kokukoen area. There's one which Louis and Chris go to regularly, and I wanted to go, cos I was thinking of buying some t-shirts and stuff, and they tend to have discounts on weekends.

Usually they drive, since it is not exactly nearby. I, however, was feeling bored, and the weather was rather nice today, additionally, I haven't exercised in quite a long time, so I decided to walk. Of course, there was also the fact that I don't have a car, so I wouldn't have been able to drive anyway.

And so I set off, at about 3.00 in the afternoon, and started walking towards Uniqlo.

2 hours and 2 backtracks later, I still hadn't found the place.

But most likely, it was because I did what could be described as the most stupid thing anyone intending to walk to some place he is unfamiliar with could have done: I went without a map. And not only did I go without a map, I went without even taking a look on the internet to have a rough idea of where I should be going.

And also, it was because I realized that minor miscalculation only after I had walked about 10 mins out from my place. And I did not feel like going back, trusting my own 'abilities' to get me there.

Of course, as I found out, my own abilities are far from proficient, which is something I've come to realize time and time again in life. Whether it's with regard to language proficiency, exams, or even just living my Christian life, I have come to realize that I really can't do it by myself. Even though all too often, I have such a strong, misguided belief in my own strength that I fail to turn to God.

What is good though, is that no matter what I've done, God is always there with me. Whether I'm walking closely with Him as I should, or when I have turned from Him and started to trust in myself, He's always with me. Sometimes, He'll pull me out of the jam I got myself into, but sometimes, He'll let me go my own way, and then after I realized what a fool I've been, He'll help me back to where I'm supposed to be.

Now, I just need to go and take a look at that map so that I can walk there next weekend...

* * *
Went to Ueno Zoo on Friday, saw lots of animals, but there was one in particular that caught my eye... 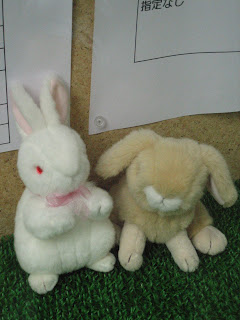 AHHHH! Rabbids! (on the left)
* * *
Ok, quick prayer note, just this past week, I was at Waseda University with Mai-chan (who does outreach at Waseda too with Yoshitaka), and Greg (who's part of a short term team from Massachusetts and South Carolina). This small group of us seemed a bit odd, since Mai-chan doesn't really speak English, Greg doesn't really speak Japanese, and I'm somewhere in the middle, though definitely more on the English side.

Then we met this girl called Nami, who's a Zen Buddhist. And she can speak a bit of English. And so the four of us had this conversation, where Greg (who used to be interested in Zen before he became Christian), would talk a bit with her, I would try to translate, and Mai-chan would translate my broken Japanese into proper Japanese.

To cut a long story short, at the end, Greg asked if he could pray for her, and asked if she had any specific prayer requests. She was unsure how to go about this, but in the end, she asked that if there is a God who really loves her, that He will let her feel/show that He does love her.

So please pray that God will answer her request.

Ok, that's about all for now. Sorry, still nothing about the food yet, but now's not really the time to be talking about food, since I am starting to feel hungry already, and I know my good friend Fuzzy wants to eat prata/fish head curry/laksa/Taiwanese Instant beef noodles.

Cheerio!
Posted by ArkAngel at 9:58 PM

Hahaha! You have forgotten all your topo skills from NS!