Today, for the first time in my life, I ate natto.

It happened after I decided to attend Matsudo housechurch in Chiba prefecture. Usually, I don't go there, since my work here in Japan is centered mostly around the west side of Tokyo, that housechurch doesn't need me to go and help out (I really can't do a lot, but what little I can do is not really necessary), and it's really far.

Ok, so really far is not so much an issue as having to pay for the train fare, which can be pretty expensive. So I usually don't go that far. Of course, going there is also good, cos the people there are really warm and friendly.

So anyway, I was at Matsudo. And after the housechurch, some of us went to Ootoya to eat dinner. I had the good fortune of sitting with Flo (who's from Belgium), as well as Mr. and Mrs. Ichikawa. And the moment Mrs. Ichikawa heard that I had never eaten natto before, she made sure she ordered an extra bowl of the stuff so that I would have to get my baptism of fire.

Now, just a short background on natto, in case you do not know what it is. It is basically, fermented soy beans that is rich in nutrients and stuff. It's a really wonderful health food, just that the taste is polarizing: you either love it or hate it. It doesn't help that it doesn't really look very appealing either. Just for your info, here's the Wikipedia entry on it.

When it arrived, Mrs Ichikawa divided it into several portions. I think I got about a third the amount. And I ate one bean.

Honestly, if taken in small amounts, it probably wouldn't be too bad. Cos that one bean tasted slightly coffee-ish (a bit like barley tea, just not as strong), and didn't seem too bad.

So I thought to myself, perhaps this isn't quite as bad as Jan and JP make it out to be.

After several more beans, however, I started to realize I didn't quite like the taste of the stuff. So I started mixing it with various other foods I had in front of me. I ate it with the salad (the dressing helped to mask the taste for a bit), I ate it with some soy sauce I got with my fish (not quite so effective), I ate it with rice (not really a good idea, unless you like natto), and then, I found out that the miso soup pretty much washed the taste away, if you drank it after eating the natto.

That's when I made the mistake of thinking that eating it all in one shot and then drinking the soup would help me get rid of the natto.

I managed about two chews before my body tried to make me spit it out. Fortunately for me (and for Mr. Ichikawa, who was sitting opposite me), I managed to hold it down and use my soup to wash away the taste.

Still, dinner with the Ichikawas is really fun, cos they may be about twice my age, but can relate to us like peers. And they are really good at keeping conversations going. Even with inarticulate gaijins like myself.

* * *
Yesterday, I also went to watch fireworks at Tachikawa. It was a combined outing between the Shinjuku, Shinagawa, and Matsudo housechurches, and our friends. I managed to get Shigeki, whom I last met in May with JP, and he was keen to join us that day. So most of us met at Shinjuku station, and then we all went to the Showa memorial gardens, where Karen had booked some space earlier in the afternoon.

It was really crowded over there. There were thousands of people gathering in the field, and this was just one part of the park. By the time I finally got out my camera, it was starting to get dark, so this was one of the few shots I got: 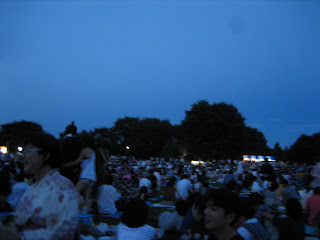 Told ya there were many people
Karen wanted to start by doing an icebreaker, but after only about 5 minutes or so, the fireworks display started, and so we all settled down and watched the show. 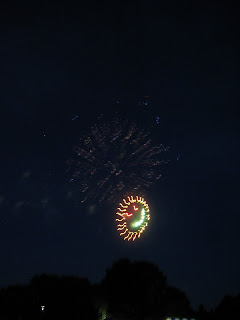 Happy firework!
Now, you probably can't see it from here, but some of the fireworks were really huge. They could easily have been several hundred meters in diameter. 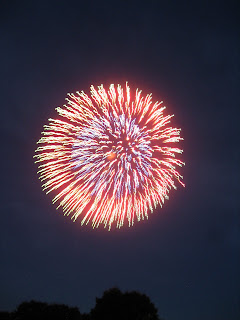 This one was probably only about 100 m across, methinks, making it one of the average-sized ones.
In the midst of my trigger-happy mood, one of the things I noticed, is that if you go to a hanabi, and want to really enjoy a good show, you can't spend all your time taking photos, cos you'll miss out on the hanabi itself. 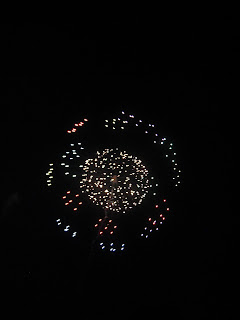 So pretty
The second thing I noticed is that all the pictures, and the videos I took of the event, did not do justice to what really happened there. The colours, though nice, are not as vibrant. And the atmosphere there creates a whole different sense of the event.

It's like my Japanese culture class teacher (can't remember if it was Prof Teow or Prof DuBois) used to say, part of the sense of the aesthetic, is that the beauty that you see is transient, the 'mono no aware' (物の哀れ). And I guess part of that beauty of the fireworks is that you can't really reproduce it. Or at least, not with my Canon Ixus. 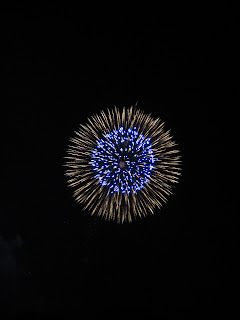 Yeah. Really doesn't do justice.
A final thought that occured to me was that this was probably the best wide-screen show I've ever had. Ok, yes I know, we've probably become so accustomed to all these 'modern' techonologies that we now need to compare nature to it, instead of the other way round. 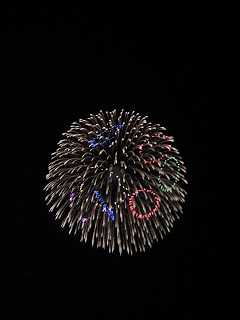 Circles within circles....
But seriously, sometimes, we are so impressed by what we have made, that we forget to see what God has given to us already. And while we go chasing after that 43-inch plasma TV or give effusive praise to the iMax theater, we fail to notice that great wide-screen expanse known as the sky.

And I'm glad that at least for an hour and a half on a clear Saturday night, I am reminded that not only is my God the God of love, but also the God of all creation. 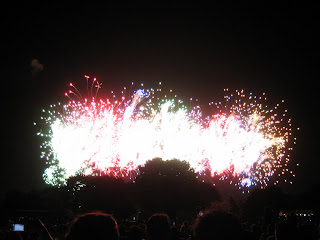 Could be a rock concert. But it isn't.
And do pray that for some of our non-Christian friends who went, that they would realize that there is a Creator. That the icebreaker that Karen did with postcards about how Jesus loves us would speak to them. And that this event would help us in getting to know them better as well.

Ok, that's about it for now.

Your food (mis)adventure sounds much like when piece of mushroom accidentally gets into my mouth - only difference is that I will never attempt to swallow it with or without anything else.

Firework pics are quite nice.

eek natto. It looked (and tasted) like it had expired for months the one (and only) time i tried it..