See, what happened was that I had to wake up early this morning for E-Moms. It didn't help that last night was Shinagawa Kai, since that usually means I only get home around 11 (no nomikai this time, if not it'll be 2 am when I get home). So when my alarm rang, I dragged myself out of bed, which is even harder to do when you realize it's freezing outside the confines of your blanket. And yes, I meant that literally: it was snowing this morning.

So I stumbled about and finally found myself at Hana-Koganei, where I had breakfast at Mr. Donut, before meeting Steve to go for E-Moms. And after E-Moms, Steve had another appointment at Akitsu, so I took a lift from him over to Akitsu station.

Now usually, I would take the train back one stop to Tokorozawa station. But I was feeling kinda bored, and since it had stopped snowing, I decided to try to walk back to Tokorozawa. So I started walking, and found a bakery along the way. 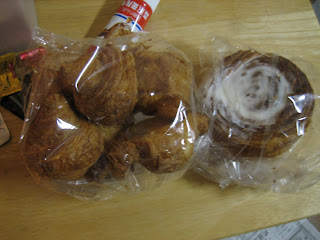 Some stuff I found there at bakery.
It was kinda nice I guess, since it was still cold, and the air was dry, but it was still somewhat cloudy, until I had walked about halfway back, when the sun started to come out. And I don't know why, but as I told Sul, it made me almost psychotically happy.

In fact, it made me so unstable that I decided to spend the rest of my afternoon walking. So after eating lunch and doing some other stuff on the 'net, I went out to buy a map and compass (since as we all know, only the map and compass are correct; you're always wrong) and just started walking.

So I guess it's a little different than in Singapore, since in Singapore, it's kinda hot and humid and after about 3 minutes you get all icky, but here, it was really quite pleasant to walk about. Especially with the sun out and helping you keep a little warm (it is winter here after all).

And for my first checkpoint, I decided an easy course: to walk from Tokorozawa station to Nishi-Tokorozawa station. The easiest way would be to follow the tracks, but with my map and compass (which are always right, though I may be wrong), I cut through central Tokorozawa City and reached CP1 pretty easily.

And that's where I felt I hadn't gone far enough. So after consulting my map (which is right) on where to go to next, I decided to walk down towards the Seibu Dome area. And walking there kinda reminded me of walking about in Taiwan with my army buds. Halfway to my CP2 though, I saw an interesting road branching out to my right. It was actually pretty large, since it was the bypass that led to route 463 out towards Hanno. So since the theme of the walk was whimsicality (is that even a real word?), I changed CP2 from Shimo-Yamaguchi to Kotesashi station, and started walking that way. 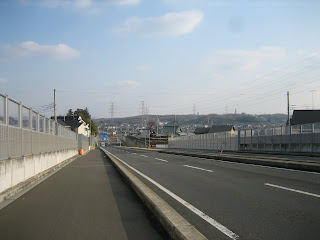 Pretty decent view from the top of the bypass.
When I got to the crossing that would bring me to Kotesashi, I felt like I could go a little further, so I set up CP3, which was the next station: Sayamagaoka. And continued walking there. By the time I reached there, almost 2 hours had passed, so I ended my trip. Also, cos my map was for Tokorozawa City only, and details did not extend beyond Sayamagaoka station.

I'm not too sure why, but I found the whole trip rather relaxing and fun. I guess, it's all about going to somewhere new, which is really quite like having an adventure. I guess I felt the same way when I went to Hanno, or even the first time I went out to Ibaraki for housechurch. I also had that same feeling when we were in Taiwan, when we were left to our own devices to muck about in the hills. Just being able to explore somewhere new, to walk there and just see the place, was really nice. It helped too, that I was able to sense God walking with me, even though the trip wasn't really meant to be a retreat or anything.

And like I said before, sometimes, we do need to go out on a whim, just without any cares (ok, you need some care. And a map and compass, since they are righter than you are), and just to walk about as far as you feel like, stopping whenever you want to.

Hmm... 5 posts in one month.. what's with the sudden overflow of words? Maybe it's something I ate...

P.S. Sorry if you don't know where the locations are and all that. If you really want to, you can check up Google Maps or something.
Posted by ArkAngel at 5:02 PM

the wintry japan air is perfect for walking. so refreshing.

Reminded me of Forrest Gump who walked hundreds of miles because he felt like walking. But he grew a beard in the process though.

i recognise that peekture in your blogger icon! >w<

Oh yeah haha you in the other half...