(May require understanding of Japanese)

So last week at Shinagawa Kai, we were all sitting around at the free space in Shinagawa Grand Commons, and Koji led a short study on prayer. And he used a rather interesting acronym to help us remember.

Most of us in the English speaking groups, may have heard of the ACTS style: Adoration, Confession, Thanksgiving, Supplication. Which if I'm not wrong, came from a general breakdown of the Lord's Prayer.

But to help us remember the different forms of prayer in Japanese, Koji came up with the 'Fish and Cat' idea. Now, it sounds kinda odd in English, which is why if you are able to speak Japanese, this will make you go "...ohhhhhh..."

Anyway, in Japanese, 'Fish and Cat' is 'Sakana to Neko'. In hiragana, that would be さかなとねこ. And here's the breakdown:

...which I found pretty cool, even though we really do need to point out that the confessions here listed in Japanese is not really quite the same idea that we have in Christian confession. But ok.

After which some of us went for nomikai (飲み会) where we all loosened up a bit and laughed at each other. 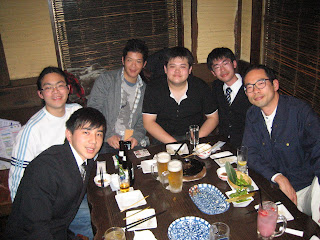 Shinagawa Nomikai: Shion, me, Watanabe, Simon, Taira, Koji.
Just fyi, nomikai is a drinking meeting. And I wanted to get the full experience: 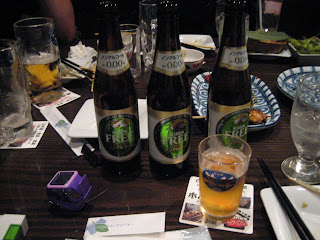 Mmmm... nom(u) nom(u) nom(u)
Of course, I had to do this without breaking my vows of ServeAsia (no alcohol being one of the 5 great commandments), so if you look closely enough, this is Kirin Free, no alcohol. But it was fun.
Posted by ArkAngel at 2:04 PM