So just last Saturday, I traveled over to Tokiwadaira in Chiba prefecture for Yan Moku's hotpot party. It was great fun, ate lots of good food, made several new friends, got to hang out with people etc.. Anyway, the most convenient way for me to get over to his place, was to take the Musashino Line. I would have to change trains twice, but I would get one long ride in the middle on the line itself, which sort of appealed to me. The line also traveled through an area which was less densely populated, which meant nicer views.

In addition, there was also a shopping complex along the line that I heard about called the Aeon Laketown. Apparently, it was pretty big, so I wanted to go and take a look and see what it was all about.

And it was really kinda huge. I've been to several large shopping complexes before, but this one takes the cake. It consisted of two large buildings that had all manner of shops and stuff. (As an aside, I'm guessing my dad was glad that my sis did not get wind of this place while the family was here). In fact, huge probably doesn't even begin to describe it. This place was massive. How massive? I was there on a Saturday afternoon, and there were throngs of people, but it didn't feel terribly crowded. That's how big.

But as my science teachers used to tell me, you need empirical data to back up your theory (unless you're dealing with theoretical physics, whereupon you can't really find said empirical data, like cats being both dead and alive at the same time). So I have kindly compiled some evidence to show just how big the place is.
Laketown: has JR station.
So now you know too that Laketown is a pretty big place. 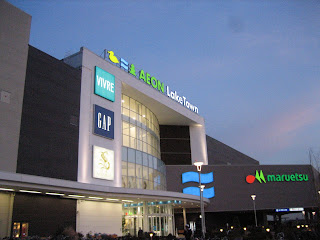 Laketown: pretty big
Posted by ArkAngel at 11:21 AM